Ahead of World Water Day (22 March), UN Women highlights the urgent need to reverse the disproportionate burden on women to provide water for their families.

United Nations, New York — Around the world women and girls often trek long distances to get water to meet their families’ basic needs. The time demands are enormous. In sub-Saharan Africa, for example, women and girls spend 40 billion hours a year collecting water, equivalent to a year’s worth of labour by the entire workforce in France.

According to a WHO and UNICEF report, three quarters of households without access to drinking water on their premises task women and girls with the primary responsibility to collect it. This is one of the factors that also prevents many girls from being able to go to school regularly. 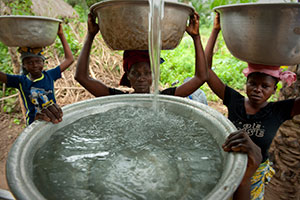 At the CSW58 side event “Women and water: multipliers of development”, on 11 March participants voiced their concerns over the heavy burden women continue to carry as the main water suppliers for their families. Participants highlighted challenges faced in gaining access to clean water and sanitation, as called on Member States to take responsibility and provide solutions to the ongoing water and sanitation crisis.

UN Women and the International Labour Organization (ILO) are partnering to integrate women’s perspectives and voices in the water supply chain and enhance women’s contribution to improving the water supply network. This involves addressing informal and unpaid work and job creation in a comprehensive way. The work is based on experiences captured in three country case studies on gender, access to water, and promotion of decent work in Panama, the Philippines and Senegal – which builds evidence and shows that  greater women’s involvement in water resource management has resulted in greater efficiency, effectiveness, sustainability and equity of the service provided and has contributed to greater community resilience.

“Population growth, increasing water use for irrigation and extractive industries, migration and climate change all leave additional pressure on water reserves. Competition between different uses and users of water leave an ever-increasing responsibility of States to provide water and sanitation through competent water and waste management,” said Ms. Schulz, Member of the Committee on the Elimination of Discrimination against Women (CEDAW) at the CSW58 side event. She also stressed that women’s access to water is a human rights issue, and that States have a duty to provide access to drinking water and sanitation without discrimination.

In Kyrgyzstan, the UN Women’s Fund for Gender Equality is also supporting the Central Asian Alliance for Water, an NGO that is working to empower women’s and girls’ access and control of drinking water management in the Southern regions of the country where access and quality of water affect their livelihoods. The programme actively involves rural and young women leaders of Kyrgyz, Tajik and Uzbek ethnic origins in drinking water management, and strengthens their role in Water Committees and local governments. It is doing so through capacity-building, leadership and peer training, gender equality awareness, gender-responsive budgeting and social mobilization.

While the MDG target of halving the proportion of people without access to safe drinking water has been achieved, however significantly less progress has been made in addressing the issues preventing women and girls from gaining access to sanitation and clean drinking water. These will need to figure prominently in the future development agenda.

“At UN Women we’re very pleased to see both gender equality and women’s empowerment, and water and sanitation, emerging as key priority areas to be addressed in the post-2015 agenda,” said Mr. Hendra. “There’s also strong support for a dedicated goal on water and sanitation. Such a goal must include gender-sensitive indicators, such as the average weekly time spent in water collection by women and men, boys and girls, and the availability of sanitation in households and in schools, in order to effectively promote achievement of gender equality and women’s empowerment, in particular for the poorest and most vulnerable women.

On World Water Day, UN Women spotlights the need to ensure access to drinking water and sanitation for all

Binga women in Zimbabwe make history on the Zambezi River

Related News
08/08/2013
International Day of the World's Indigenous Peoples
11/12/2014
Around the world, women and men of all ages “orange their hoods” to end violence
27/06/2014
Women in power and decision-making: Strengthening voices for democracy
05/09/2013
Domestic workers' rights treaty becomes reality
28/06/2021
Winners of the comic and cartoon competition, “Generation Equality: Picture It!”
END_OF_DOCUMENT_TOKEN_TO_BE_REPLACED