“Without access to education, it is impossible to make gender equality a reality”- Vivian Onano 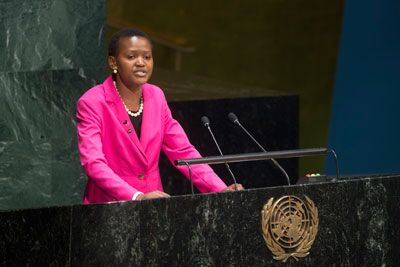 Vivian Onano, youth activist and member of the UN Women Global Civil Society Advisory Group, was invited to deliver the keynote speech at a Special Session at the UN General Assembly today to take stock of progress made on the 1995 World Programme of Action for Youth, which offers practical guidelines for national action and international support to improve the situation of youth around the world. Member States and other relevant stakeholders analysed its implementation and identified the gaps and challenges that lie ahead, in addition to discussing the best way forward.

Ms. Onano reminded the audience of the importance of girl’s education in achieving gender equality noting that “without access to education, it is impossible to make gender equality a reality.”

The 24-year-old youth leader stressed that: “Achieving gender equality is more than 50-50 representation; it is also about recognizing and respecting women’s rights as human rights, treating women with dignity, offering them equal opportunities to participate fully in the socioeconomic and political development of their individual countries.”

She also highlighted the need to engage men and boys, emphasizing that “in defending women’s rights, men are actually preserving their own dignity.”

Ms. Onano was appointed member of the UN Women Global Civil Society Advisory Group in 2014, in an effort to increase its youth representation. Two other youth activists, Dakshitha Wickremarathne and Alaa Murabit, were also selected from among hundreds of youth leaders to be part of the Group.

Watch an archived webcast of her speech at this Special Session at the General Assembly.

Watch Vivian’s video "The Youth Effect" on the importance of educating girls.

View this interactive map of educational transition, by gender: