UN Women Deputy Executive Director and UN Assistant Secretary-General Lakshmi Puri was one of the keynote speakers at the official event to mark the United Nations’ 70th anniversary in the Czech Republic. Held on 1 June, the conference, entitled “70 Years in the United Nations: Sustainable Development as a Challenge and Opportunity”, brought together 300 representatives of mostly local institutions including government, NGOs, business and academia.

“Seventy years ago, the United Nations was founded on the ashes of World War II,” she said. “The organization has since contributed to progress in development, peace and security and human rights. As we are facing new global challenges, in 2015, we have the historic opportunity to define a future agenda that delivers transformative change that people – women and men – around the world are demanding, and deserve.” 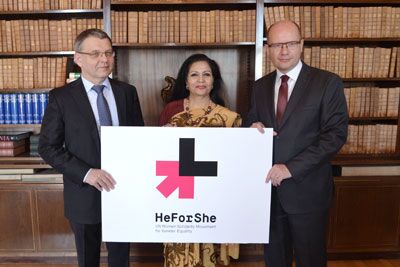 Prime Minister of the Czech Republic Bohuslav Sobotka and Foreign Minister Lubomir Zaoralek opened the Conference at the Grand Hall of the Czech Ministry of Foreign Affairs. Ms. Puri held bilateral meetings with both, highlighting the role and mandate of UN Women, advocating for major gender equality campaigns and inviting both leaders to join the HeForShe campaign.

“Women in the Czech Republic have been enjoying the right to vote since 1918 and the employment rate of women has been one of the highest worldwide. Gender equality, though, remains a relevant goal,” said Prime Minister Sobotka.

Ms. Puri offered assistance and technical support to the Government on the development of legislation and welcomed their enthusiasm to take part in several advocacy initiatives.

On the first day of her mission, Ms. Puri also met with the Minister for Human Rights, Equal Opportunities and Legislation, Jiri Dienstbier, and held public discussions with NGOs and UN agencies at the UN Information Centre in Prague, as well as with students at the Charles University School of Law. 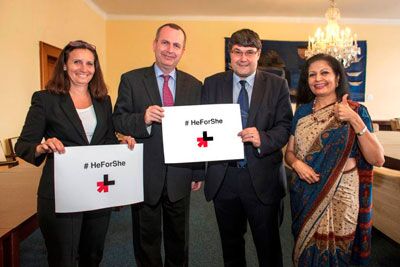 Ms. Puri promoted UN Women’s HeForShe campaign, with the Prime Minister, Foreign Minister, the Minister for Human Rights, the Rector of Charles University and Dean of the Law School all signing on. They promised to champion the campaign, including among other faculty and parliamentarians.

“Gender equality is a human right and one of the basic principles of democracy. Everyone should be committed to promoting gender equality regardless gender,” Minister Dienstbier told Ms. Puri.

Related News
19/06/2015
There is a unique role for countries who want to address women’s issues in the international area – Executive Director
10/06/2015
Workshop stresses the importance of financing for gender equality, post-2015
26/10/2016
In Albania, football and a mobile app get men to commit to gender equality
22/01/2016
Having women leaders at the executive level is critical — Executive Director
06/10/2015
British actress Gugu Mbatha-Raw speaks at HeForShe #GetFree University Tour
END_OF_DOCUMENT_TOKEN_TO_BE_REPLACED