Marking a historic step for women’s rights and gender equality, representatives of G20 countries, that constitute two-thirds of the world’s population and 85 per cent of GDP, launched a new engagement group to advance the economic empowerment of women. 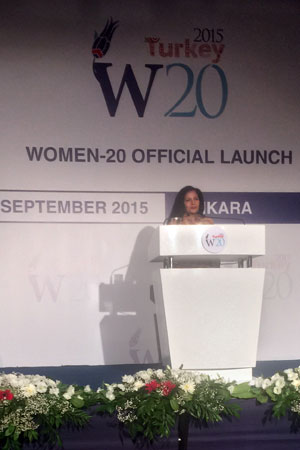 Representatives of G20 countries met in Ankara, Turkey on 6 September to launch Women 20 (W20). Under Turkey’s leadership, with the strong support of UN Women, W20 will work to promote women’s involvement in financial decision-making while monitoring G20 commitments to among other priorities, entrepreneurship, employment and education of women.

Turkish Prime Minister Ahmet Davutoğlu said he saw the W20 as a vehicle for holding the G20 accountable for commitments made to gender equality and women’s empowerment, such as the pledge made in 2014 to reduce the gap in labour force participation rates between men and women by 25 per cent by 2025. International organizations estimate that this, in itself, is expected to bring more than 100 million women into the labour force. He also stressed the need for concerted efforts to bring women’s role in decision-making to extend beyond the household, into economic and other spheres of influence.

Speaking at the launch, UN Women Deputy Executive Director Lakshmi Puri was quick to underline the link to Financing for Development to channel resources to support closing the gender gap in the labour force, and also to address issues such as unpaid care work that constrain women’s ability to engage in employment and entrepreneurship.

“Addressing the significant underinvestment in gender equality and women’s empowerment is critical in and of itself,” Ms. Puri added. “The W20 has the potential to influence economic governance and promote gender-inclusive economic growth in a more potent way than has ever been possible in the G20 until now.”

Ms. Puri emphasized the importance of holding the G20 accountable for its gender equality and women’s empowerment commitments arising from international treaties, declarations and global agreements, including the soon-to-be adopted 2030 Agenda for Sustainable Development, which includes gender-sensitive targets in 12 of the 17 goals, including stand-alone Goal 5 on gender equality. She noted the fundamental importance of integrating gender equality into the localization of the 2030 Agenda by the world’s most powerful economies, in particular by embedding gender equality and women’s empowerment in macroeconomic and fiscal policymaking as well as ensuring effective implementation including the monitoring of possible differential impacts on women. Ms. Puri encouraged a sharing of good practices and lessons learned at the G20 level, through W20 facilitation.

UN Women acts as a technical resource to regional and other groups drawing attention to key findings in research, such as Progress of the World’s Women 2015-2016, which provides guidance on transforming economies and realizing rights.

Also speaking at the W20 launch, International Monetary Fund Managing Director Christine Lagarde stressed the need to verify assertions that change has indeed taken place, emphasizing the need for metrics. Data that has been collected makes clear that women's participation in the economy decreases inequality and poverty. She said it makes sense to invest in women and the W20 can guide the G20 in this regard.

The two-day inaugural W20 Summit will be held in Istanbul from 7-8 October 2015 to unite leaders from G20 countries around the need for gender-inclusive global economic growth through the economic empowerment of women.