Expert’s take: Why women must be at the heart of the humanitarian response in Haiti 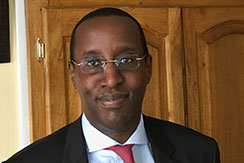 Anthony Ngororano is Programme Advisor and Head of the Africa Section at UN Women Headquarters and is currently serving as Representative a.i. UN Women Haiti. Previously, he has also served as Representative a.i. UN Women Malawi. A national of Rwanda, he has over 19 years of experience in programme, policy and operational functions in the United Nations, government and private sector. Prior to joining UN Women, he served as Senior Economic Advisor to the Prime Minister of Rwanda. Mr. Ngororano holds graduate degrees in Development Economics and International Relations.

As I was flying over the coastal town of Jeremie in Southern Haiti, the devastation below was overwhelming. Trees had been shredded into smithereens, acres of lush farmlands wasted, homes upended, roads and lifelines to medical, food and water supplies destroyed and entire communities had been ripped apart, their livelihoods lost. I thought, “If it looks so bad from up here, what must it be like to be down there?”

On 4 October, Hurricane Matthew, the strongest hurricane that Haiti has seen in a decade, tore through the country, bringing death and devastation, particularly in the South, Grand’Anse and Nippes departments. As of 12 October, it had claimed 473 lives. Over 2.1 million people (roughly 19 per cent of the Haitian population, or one in five) are estimated to have been affected, with the number of wounded also on the rise. Over 1.4 million people (12 per cent of the Haitian population) are estimated to be in need of humanitarian assistance [1].

Crises are not gender-neutral—they disproportionately affect women, especially in contexts where discriminatory gender norms exist. Often, more women die than men during natural disasters, being the last to escape as they prioritize the safety of their family and children. In the 1991 Bangladesh Cyclone, five times as many women as men died. Women accounted for 67 per cent of the fatalities of the Indian Ocean Tsunami [2].

Haiti is no exception— the most vulnerable and the worst affected by Hurricane Matthew are women and children. Even when women survive, they have a desperately hard time rebuilding their lives. On top of the loss of housing, livelihood and families, women are exposed to greater threats of gender-based violence and health risks.

UN data shows that 60 per cent of preventable maternal deaths take place in crisis settings and at least 1 in 5 refugees or displaced women are estimated to have experienced sexual violence [3]. Women and girls affected by Hurricane Matthew must have equal access to humanitarian assistance, especially the most vulnerable among them, such as female heads-of-households, pregnant or lactating women, widows and women with disabilities.

Lessons learnt in the past remind us that this equal access cannot come at the expense of women’s safety. In the aftermath of the devastating 2010 earthquake in Haiti, many camps were overcrowded, had unsafe living spaces and lacked adequate sanitary facilities. They were also poorly lit, leading to night attacks on women en route to collecting water. For humanitarian action to truly deliver relief and recovery for all, women’s differentiated access to humanitarian assistance must become a reality, including through the provision of sanitation facilities for them specifically, for example.

In the response following the 2010 earthquake, the voices of Haitian women civil society were absent from the Government’s Post-Disaster Needs Assessment, the guiding document for all relief and recovery efforts. As a result, the PDNA only addressed gender in one of the eight themes. Engaging crisis-affected women as leaders and participants and counting in their specific needs in all areas of humanitarian response is a human rights obligation. We need to do more and better this time.

Following the 2010 earthquake, women and adolescent girls in displacement camps were found to be engaging in ‘transactional sex’. Cash-for-work programmes that help women become entrepreneurs, not only offer a path to their economic recovery, but also tackle the root cause of such negative coping mechanisms. However, evidence shows that often these programmes target men. For example, 76 per cent of cash-for-work programmes in Za’atari refugee camp targeted men [4]. In Haiti, where 41 per cent of households are female-headed, this would be a grave mistake.

Additionally, evidence shows that better targeting of women and girls strengthens the impact of humanitarian action. It also presents the possibility of reversing existing gender discrimination, for instance, by including women and men in equal numbers on assessment teams, in committees and leadership positions.

When our plane landed in Jeremie, we visited a shelter and spoke with displaced women there, together with a group of women’s organizations. We discussed their priorities and concerns, and how we could best support them. One immediate concern was around receiving wheat instead of rice, which made it difficult for them to feed their children.

There are also a large number of displaced persons living with neighbours whose homes were not as severely impacted. One ministry official told us that she was housing 37 people; the size of the average household in Haiti is six people

We met with women engaged in the fisheries sector, whose main concern was their loss of livelihood. Women sheltering in schools expressed their apprehension about reopening of schools, wondering where they would go.

UN Women in Haiti is stepping up its efforts to meet the immediate needs of the affected population, putting women at the centre of our response. UN Women intends to facilitate their access to lifesaving protection and humanitarian services. A number of immediate actions have already been envisaged, such as the implementation of cash-for-work interventions directed towards the most vulnerable women to get them back on their feet. We are working together with women’s organizations and grassroots networks, empowering these organizations to lead and monitor crisis response interventions.

The devastation wrought on by Hurricane Matthew looks worse up close, on the ground. But excluding women, or meeting them only halfway in humanitarian response will be a catastrophe that we cannot afford. Building on lessons learnt from the 2010 earthquake response, the Haitian Government and humanitarian actors must get it right for women and girls this time. And all of Haiti will benefit as a result.

[3] United Nations Economic and Social Council (2014) Gender equality and the empowerment of women in natural disasters, Report of the Secretary-General.

[4] UN Women (2016). Promoting the Rights, Needs and Agency of Women and Girls in Humanitarian Action

Related News
14/10/2021
Your questions answered: Women in Haiti
15/09/2021
Press release: Being amongst the most affected by the earthquake, women’s and girls’ meaningful participation and leadership are crucial to an effective and successful humanitarian response in Haiti
03/11/2016
In post-hurricane Haiti, women work together to rebuild
12/10/2016
Preparing for disasters, rebuilding in the aftermath
12/10/2016
UN Women provides immediate support to women in Grande Anse after Hurricane Matthew
END_OF_DOCUMENT_TOKEN_TO_BE_REPLACED