Tunisia’s Parliament has approved an amendment ensuring that women have greater representation in local politics. This amendment, which applies to both municipal and regional elections, includes a proposal for “horizontal and vertical” gender parity in Article 49 of the electoral law. 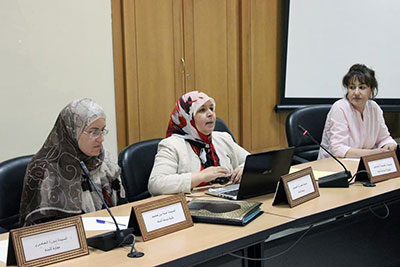 Plenary session in the Assembly of Representatives of the People (ARP), with UN Women. Photo: ARP

“The adoption of the new electoral law on parity aligns with the democratic path that the country has chosen to take,” said Bochra Belhaj Hamida, a parliamentarian and member of the Commission of Women, Family, Children, Youth and Seniors. “For the first time, 73 women parliamentarians, from different parties, backgrounds and political ideologies, voted unanimously and conducted their own lobbying in favour of the horizontal and vertical parity.”

UN Women joined forces with the advocacy efforts led by civil society for horizontal parity in local elections. On the eve of the plenary session in Parliament for this draft law, a specific session was held in partnership with the International Development Centre for Local Innovative Governance. Women parliamentarians presented arguments and evidence in favour of the adoption of horizontal and vertical parity.

According to the Gender Gap Report 2015, Tunisia is ranked 69th in terms of political empowerment out of 145 countries. Enshrining horizontal and vertical parity in the electoral law increases women’s chances of being elected in the upcoming local elections planned in March 2017, and will allow for better representation in municipal and regional councils. It constitutes significant progress towards inclusive government, equal opportunities and gender equality.

“Besides being a first in our region, the adoption of horizontal and vertical parity in electoral law is a timely achievement because it will guarantee effective participation of women in the upcoming decentralization process in Tunisia,” said Leila Rhiwi, UN Women Maghreb Representative. 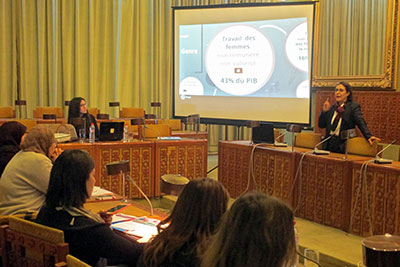 UN Women takes part in a plenary session in the Assembly of Representatives of the People. Photo: UN Women

In line with its efforts to support women’s leadership and political participation, in March 2016 UN Women initiated a project with parliamentarians in Tunisia that involved advocacy sessions around the legislative agenda, capacity building, networking and support for the implementation of the women’s caucus. This initiative, conducted with Members of Parliament, aims to improve the representation of women in both local and national politics. To date, four sessions have been held.

These efforts are in line with UN Women’s “Step It Up” initiative. At the Global Leaders' Meeting on 27 September 2015, Tunisian Prime Minister Habib Essid pledged to expand women’s ability to participate in politics and public affairs, saying: “Our experience in democratic transition recently is witness to the fact that women should be represented in all legislative bodies. Hence, we enhance women's ability to participate in politics and in public affairs. This is a commitment.”

Related News
27/08/2018
Historic leap in Tunisia: Women make up 47 per cent of local government
25/07/2017
From where I stand: “Women have to be at the heart of the Africa of tomorrow”
13/09/2013
Strengthening Voices for Democracy
16/05/2013
With some electoral gains in Iraq, women candidates work towards change
22/06/2011
Egypt: Women’s Charter Calls for a Democratic Transition
END_OF_DOCUMENT_TOKEN_TO_BE_REPLACED