In addition to taking part in a two-day consultation for the UN Secretary-General's High-Level Panel on Women's Economic Empowerment, the Executive Director attended several events and meetings, including with the leaders of South Africa’s student movement, the launch of a programme that supports survivors of domestic violence, and the launch of the national Civil Society Advisory Group for UN Women South Africa. Ms. Mlambo-Ngcuka will also receive an honorary doctorate from the Fort Hare University. 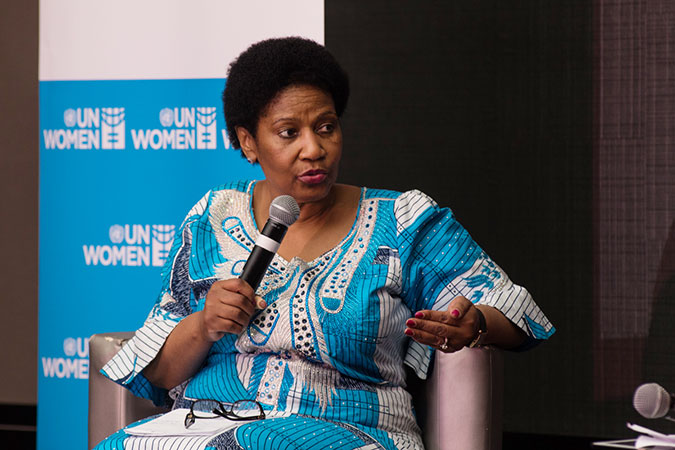 On Wednesday, 17 August, UN Women South Africa Multi-Country Office launched its Civil Society Advisory Group (CSAG). The group is made up of civil society leaders from South Africa, Lesotho, Namibia, Botswana and Swaziland and will provide guidance to the Multi-Country Office on the implementation of its programmes, advocacy initiatives and policy work.

Executive Director Phumzile Mlambo-Ngcuka attended the launch where she was the keynote speaker. The Executive Director’s address took the form of a conversation with Vuyo Mahlati, Global Director of the International Women’s Forum.

Speaking about UN Women’s formation, Ms. Mlambo-Ngcuka said: “UN Women would not have existed if not for civil society. That is why today is so important. Today is about affirming, recognizing and institutionalizing the role of civil society in the life and work of UN Women in the countries covered by the Multi-Country Office. Our mandate as UN Women is addressing policy deficiencies as they impact women. Part of this work is to ensure that the existing good laws in countries are being implemented. That is where your role as civil society really comes in. Your role is to monitor, support and be advocates of the proper implementation of agreements that governments have undertaken.” 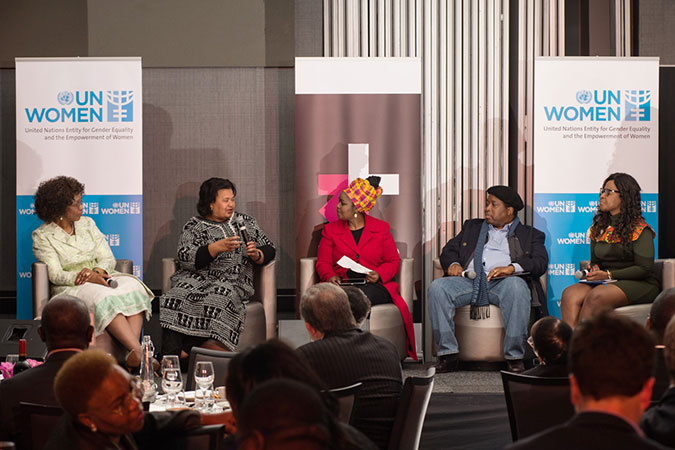 Also on the 17 August, UN Women Executive Director Phumzile Mlambo-Ngcuka was awarded an honorary doctorate in social sciences by the University of Fort Hare, in South Africa’s Eastern Cape. 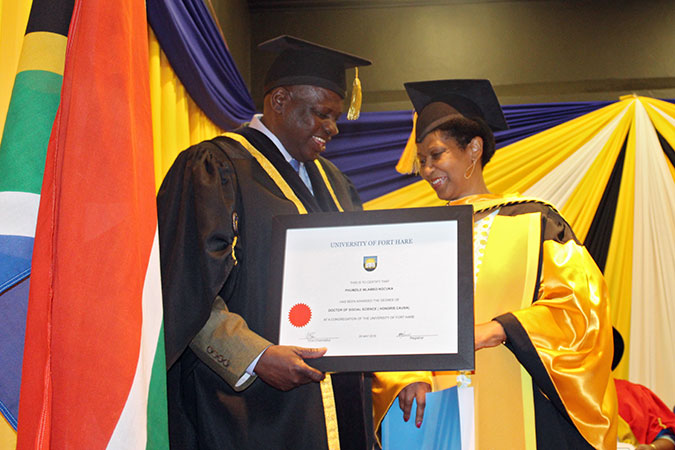 On awarding Ms. Mlambo-Ngcuka the doctorate, the university’s Vice Chancellor, Mvuyo Tom, said: “Phumzile Mlambo-Ngcuka has equipped herself with an education and used that education for the benefit of society at large. For her lifelong commitment and participation in the struggle for democracy, non-racialism, for non-sexism and gender equality and for raising the profile of the importance of education in South Africa, we award this degree of Doctor of Social Sciences.”

Thanking the university for the award, Ms. Mlambo-Ngcuka said: “This year marks the 60th year since the 1956 women’s march. I’m humbled and appreciative of this honour, which encourages dedication to our common agenda. Let me dedicate my remarks to the women of the 1956 women’s march, on whose shoulders we stand, and our young women, on whose sweat and hard work our future depends. As we stand between these two generations we have a responsibility to create a sustainable future that will assist those to whom we will be handing over our nations to achieve even higher goals than us.”

UN Women Executive Director Phumzile Mlambo-Ngcuka attended the launch of the Edgars UNiTE programme in the KwaZulu-Natal province. Launched in 2015, the programme teaches clothing design and sewing skills to women living in domestic abuse shelters, with the aim of eventually employing them within the EdCon group, South Africa’s largest non-food retailer. The programme is a partnership between UN Women South Africa Multi-Country Office, EdCon, the South African Fashion Council and the Gauteng Departments of Social Development and Public Safety. 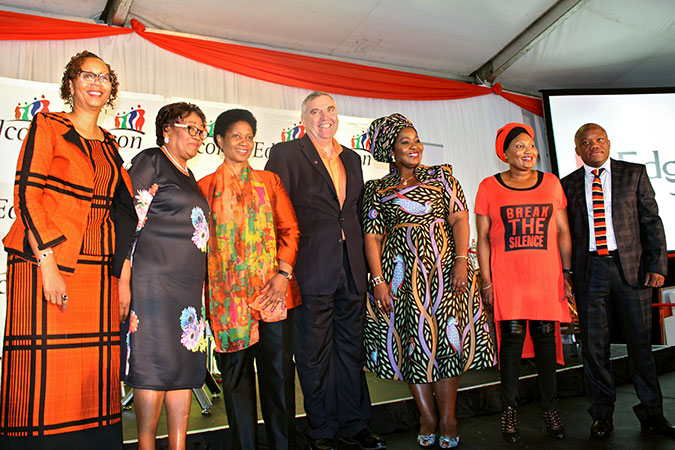 In her keynote address at the launch, Ms. Mlambo-Ngcuka said, “Our focus at UN Women is to prevent violence against women from occurring, but also to ensure that where women have experienced violence, there are mechanisms in place for them to be cared for, and to be helped to recover. This programme tackles all of these areas.”

Speaking at the launch, KwaZulu-Natal Member of the Executive Council for Social Development, Sihle Zikalala said that “This programme directly contributes to our shared objective of the economic emancipation of women. It aims not just to draw attention to violence against women, but to put in place a practical programme that takes women forward.”

“Education, training and economic empowerment are a great vaccine to break the cycle of violence,” said EdCon CEO Bernie Brooks, who also signed up as a HeForShe Thematic Champion to, “A significant increase in women’s representation in senior management over the next two years, and the expansion of our gender programmes to all areas of staff and all areas of operation,” in addition to the nationwide roll-out of the UNiTE programme.

In celebration of International Youth Day and South Africa’s Women’s Month, the United Nations in South Africa hosted a soccer match between the UN and Vakhegula Vakhegula (‘Grannies Grannies’), a team made up of elderly women from the South African province of Limpopo. 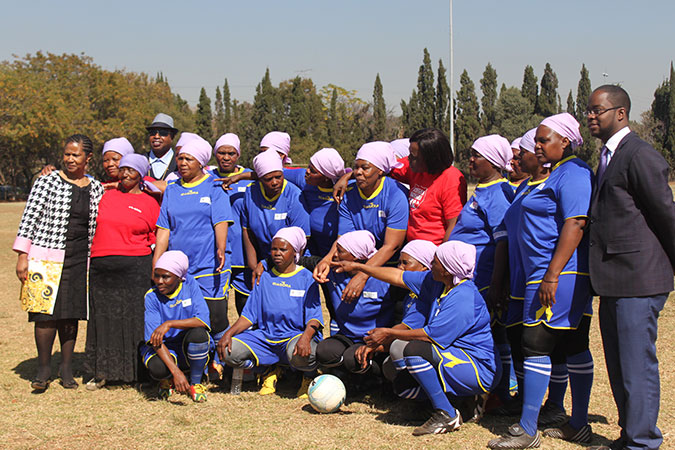 Speaking at the event, Ms. Mlambo-Ngcuka emphasized the advancement of gender equality as part of the Sustainable Development Goals. Mlambo-Ngcuka said: “This soccer match reiterates this concept of ‘leave no-one behind’ as women across all ages, race groups and cultures are here for a common cause and that is to advance the development of all women.”

UN Women Executive Director Phumzile Mlambo-Ngcuka attended a two-day regional consultation hosted by the UN Secretary-General’s High-Level Panel on Women’s Economic Empowerment, together with UN Women, Oxfam and the University of the Witwatersrand, on 11 and 12 August in Johannesburg, South Africa. The event, themed “Making Economies Work for Women in the South: What Will it Take?” discussed the experiences of women working in the informal sector, gender differences in pay and working conditions and the impact of the care economy on women’s time and opportunities, among other issues. 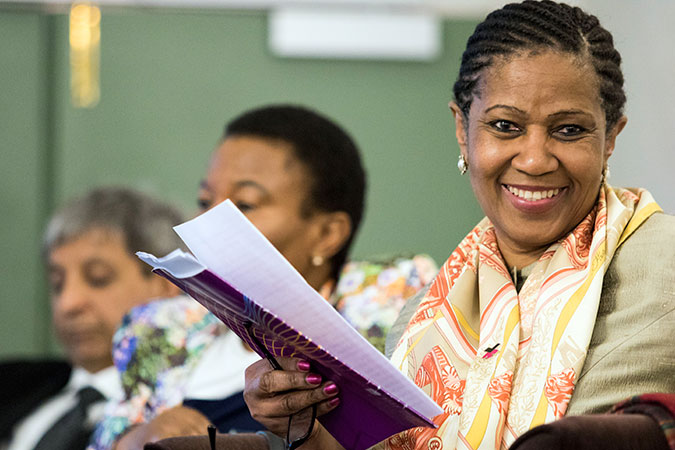 In her opening remarks, Ms. Mlambo-Ngcuka said, “In many countries, policies are not informed by the real situation that the women may face, or they just may not consider the [informal] sector at all. I would hope that one of the areas that comes out of this consultation is really prioritization of policy and representation.” 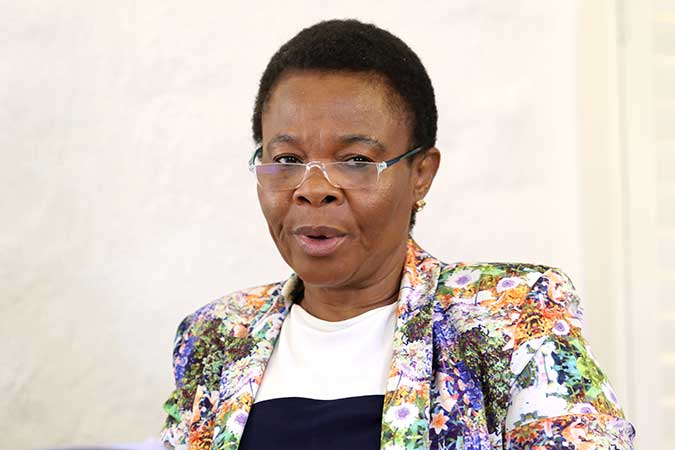 Speaking at the event, Susan Shabangu, Minister of Women in the Presidency of South Africa, noted the progress made by South Africa and the challenges that remain, towards achieving gender equality: “We are a country with more women than men in institutions of higher learning. We continue to implement new policies and legislations to address the imbalances in our society. But we are still concerned that the pace of transformation when it comes to women’s participation in our economy is too slow. Women are lagging behind when it comes to the workplace. Unwritten laws continue to serve as barriers to their progress: what we deem ‘professionalism’ continues to battle with motherhood, and other unpaid care work…As a country we are proud that South Africa’s National Development Plan is in line with Agenda 2030 and the Sustainable Development Goals and will work in line with these roadmaps to ensure that when it comes to gender equality, nobody is left behind.”

Panelists discuss the experiences of women working in the informal sector, gender differences in pay and working conditions and the impact of the care economy on women’s time and opportunities in South Africa. Photo: Wits University/Lauren Mulligan

The event brought together development partners, leading academics, women’s rights experts and leaders, including UN Women Executive Director Phumzile Mlambo-Ngcuka, Minister for Women in the Presidency of South Africa, Susan Shabangu, University of the Witwatersrand Vice Chancellor Adam Habib, and the African Development Bank’s Special Envoy for Gender, Geraldine Fraser-Moleketi, as well as representatives from civil society and the private sector. The Panel will submit an interim report in September, shaped by the consultations underway, and make action-oriented recommendations on how to improve economic outcomes for women in the context of the Sustainable Development Goals.

On Wednesday 10 August, McKinsey and UN Women hosted the launch of the McKinsey Women Matter Africa report. The report looks at women’s representation, especially in leadership positions, in the public and private sector across Africa. 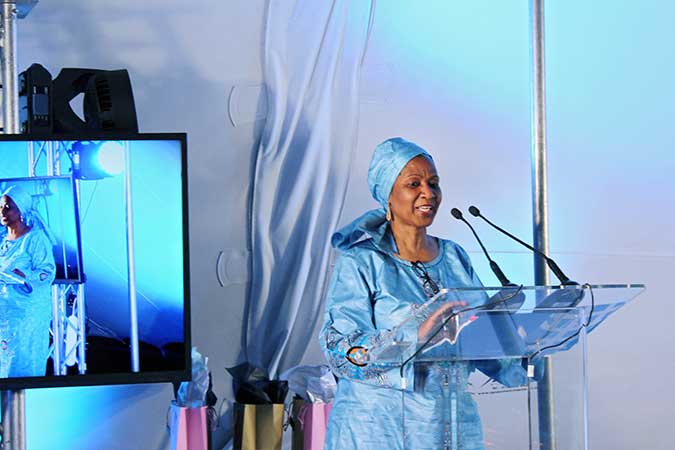 Speaking at the event, Ms. Mlambo-Ngcuka highlighted the HeForShe Impact 10X10X10 initiative, of which McKinsey is one of 10 corporate champions. UN Women launched a report detailing the workforce gender diversity figures of the ten corporate champions at the World Economic Forum in Davos this year.

“These companies have committed to achieve gender parity by 2030. It is not easy for companies to put their data, especially if it isn’t flattering, in front of their peers at a place like Davos, which is highly competitive,” Ms. Mlambo-Ngcuka said. “When we released the report some of the CEOs saw the report for the first time, and them seeing where they were behind the other companies in the report has started a rush to be the best when it comes to gender equality. So we’d like to see that play itself out on the African continent, and we hope the Women Matter Africa report will do the same.”

The report reveals that only 5 per cent of CEOs across the private sector in Africa are women and that men accounted for 64 per cent of all promotions over the last year. In government, the number of women in parliament has almost doubled over the last 15 years. However, the report also notes: “Numbers do not equal influence. Although the number of women in leadership positions may have risen, women do not necessarily have greater power”.