Research shows that domestic workers in Cambodia need access and information about physical and mental health. A new technology supported by UN Women empowers them towards a healthier life. 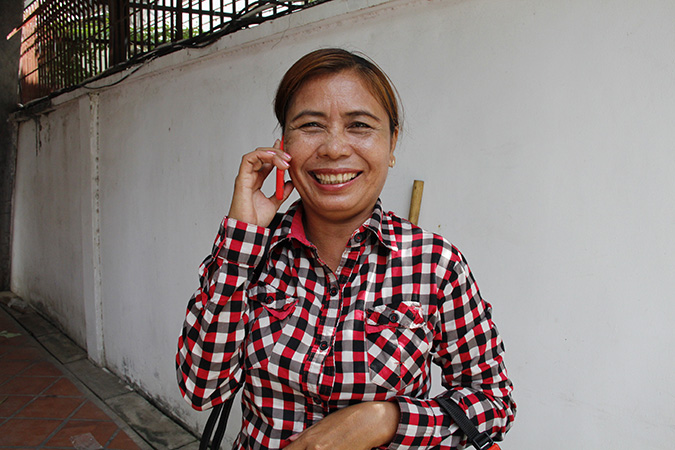 Samen Phalla, a 44-year-old domestic worker and a team leader of the Cambodian Network of Domestic Workers. Photo: Lisa Taïeb.

“If we have a health issue and we don’t know what it is or what to do, we now call the phone service for support,” says Samen Phalla, a 44-year-old domestic worker and a team leader of the Cambodian Network of Domestic Workers. Born in the Svay Rieng province, Phalla came to Phnom Penh as a domestic worker when she was only 16. “Being a domestic worker is a physically hard job,” said Phalla. She cleans three different houses on an almost daily basis. “To earn a decent amount of money, we have to work hard. But I don’t mind that,” she smiled.

Phalla last went for a medical check-up in 2007. “The doctor told me to get some medicine for my headaches, muscle pain and sleeping disorders, but I didn’t. I did not have the money and didn’t know how to get the medicine,” she explained.

Domestic workers are not protected under the Cambodian Labour Code for safe working conditions and health care, and domestic work is commonly seen as a form of servitude. Now, with the Interactive Voice Recognition service (IVR) technology, developed with UN Women’s support, domestic workers can call a toll-free number from their mobile phones or smartphones, connect to a database that gives them user-friendly information on available health services. It also provides information about the national laws on labour and domestic violence and how to access support services and legal assistance.

A few weeks ago, Phalla met with specialists who treated her medical conditions and also gave her information about her reproductive health. “I am now in good health and don’t have headaches anymore,” said Phalla, grateful to be able to enjoy quality time with her family.

“I used to have a lot of stress and suffered from severe headaches. I didn’t know how to deal with it or where to go,” says Chenda Deth, a 50-year-old domestic worker from Kampong Cham Province. She started working as a domestic worker in Phnom Penh after her divorce and has worked with six employers so far. Using IVR, Deth has found appropriate health services and is more aware of her rights. Her headaches are gone and she feels happier.

“The IVR technology aims to fill a knowledge gap among domestic workers,” said Socheath Heng, Programme Manager at UN Women. “Access to services is very important, but women must also have information readily available about these services. The IVR technology enables this,” explained Heng.

The IVR technology was developed in partnership with the Cambodian organization, Open Institute, as part of UN Women´s Asia Pacific´s project, “ Preventing the exploitation of women migrants workers in the ASEAN region” running from 2015-2017 and funded by the Government of Australia. The IVR is available in Khmer language and can be reached locally by dialing 070-221-148.

Related News
15/11/2021
How women migrants in Thailand are stopping trafficking and gender-based violence in their communities
27/04/2020
Far from the spotlight, women workers are among the hardest hit by COVID-19 in Bangladesh
01/07/2019
Empowering South Asian women migrant workers through improved contracts
06/03/2019
Migrant workers lacking work benefits learn how to save in the Philippines
26/02/2018
From where I stand: “I kept the courage and managed to escape”
END_OF_DOCUMENT_TOKEN_TO_BE_REPLACED