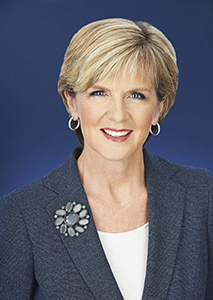 Following the signing of the Australia-UN Women 2016-2020 Partnership Agreement on 16 December 2016, Julie Bishop, Australian Minister for Foreign Affairs, outlines why her Government believes funding UN Women is an important priority.

What are the key elements of the new Partnership Framework Agreement between Australia and UN Women?

The Australian Government and UN Women share a commitment to advancing gender equality in our region and beyond.

The Partnership Framework reflects UN Women’s role in working to prevent violence against women and enhancing women’s political participation. In the Pacific, for example, UN Women is implementing the Australian-funded Markets for Change programme, which works with women in produce markets in Papua New Guinea, Fiji, Solomon Islands and Vanuatu. This innovative programme is making marketplaces in rural and urban areas safe, inclusive and non-discriminatory environments.

Australia also supports the UN Trust Fund to End Violence against Women, which is reaching thousands of women and girls affected by violence and providing them with support and a new future.

How important is gender equality and women’s empowerment to your Government’s multilateral aid policy?

The Australian Government continues to elevate gender equality in its foreign policy, economic relationships and aid programme as a way of driving economic growth and reducing poverty in our region.

In 2014 I identified gender equality as one of six priority areas for our aid programme and earlier this year, I launched the Australian Government’s new Gender Equality and Women’s Empowerment Strategy. The Strategy is the first of its kind and will drive progress in three key areas: ending gender-based violence; improving women’s economic empowerment; and boosting women’s participation in leadership and peacebuilding.

The Australian Government has established a $55 million Gender Equality Fund and remains committed to ensuring that more than 80 per cent of development activities address gender equality.

Through both your funding and the new Partnership Framework Agreement with UN Women, what results do you hope to achieve?

It is vital that United Nations activities to promote gender equality are coordinated to achieve the best possible impact. UN Women plays a pivotal role across the UN system. This is particularly important in the Pacific, where resources are scarce and the challenges considerable.

Australia’s commitment to improving global gender data is long-standing and we are supporting UN Women’s role in this area. The 2030 Agenda for Sustainable Development requires better data collection about the lives of women and girls around the globe. We are pleased to support the UN Women’s Flagship Programme Initiative Making every woman and girl count, which aims to close the gender data gaps and ensure that sex disaggregated data are not only collected, but reported on and used.