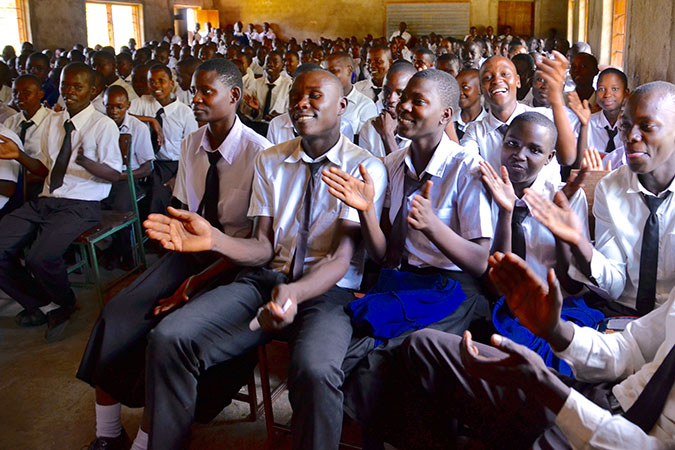 “Many girls flee their homes with nothing more than the clothes they were wearing,” says Apaisaria Kiwori, as she instructs the designated cooks to stir the pots of red kidney beans and rice for dinner. Kiwori is the head matron of the only safe house in Mugumu, Serengeti, in the Mara region of north-western Tanzania that takes in young girls escaping child marriage, domestic abuse and sexual assault; but primarily girls who are escaping female genital mutilation (FGM).

The UN Trust Fund to End Violence against Women (managed by UN Women on behalf of the UN system) has supported Amref Health Tanzania to launch an awareness raising and advocacy programme here in January 2016, aiming to end FGM practices in the region. According to the Tanzania Demographic Health Survey 2015, the FGM prevalence rate in Mara is 32 per cent, more than three times the national average. 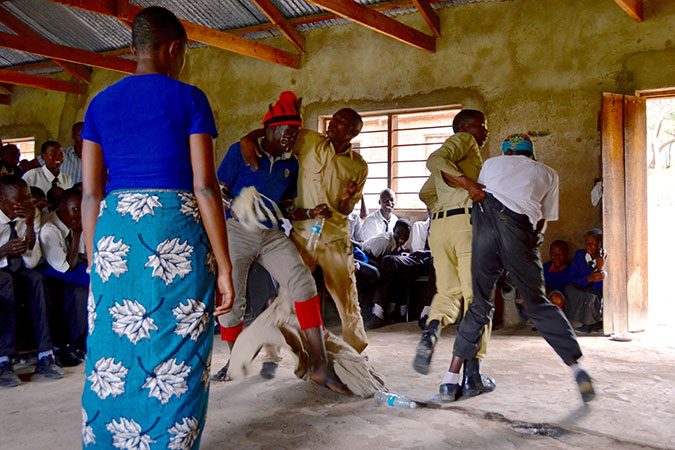 Student actors play police apprehending FGM practitioners - this scene is the highlight of their play, and is always received with loud cheers of approval and laughter. FGM has been criminalized in Tanzania since 1998. Photo: UN Women/Deepika Nath

“Every two years, girls as young as age four are registered with local clan leaders to undergo the cut,” explains Godfrey Matumu, Project Manager for Amref Health Africa in Mara. “In December 2016, 5,621 girls of the Kurya tribe were registered, and 41 per cent were cut.” The numbers seem daunting, but Matumu assures us that the trainings and awareness raising sessions have made significant progress: “In comparison, during the last high season in December 2014, 14,122 girls were registered and it is highly likely that all of them were cut.” Matumu and his team attribute the 60 per cent drop in the numbers to greater understanding of the health consequences of FGM; and increased awareness and support of village elders and local elders to stop the practice. 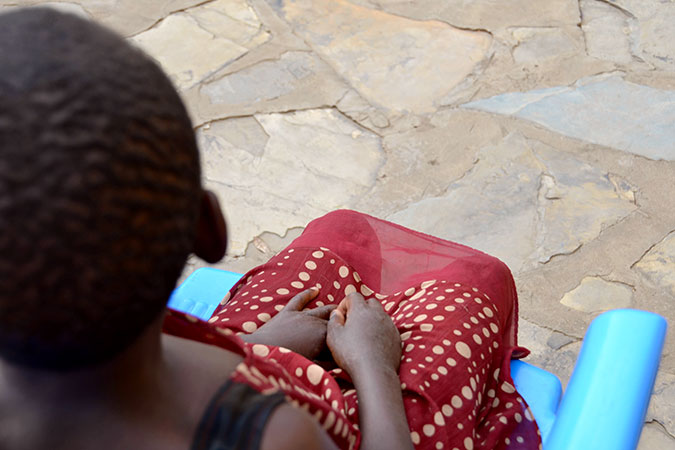 The high season Matumu is referring to comes after the December rains for every even numbered year. Traditional leaders and village elders of the Kurya tribe, the predominant indigenous tribe in Mara with the highest rates of FGM in the country, gather to consult traditional circumcisers called Ngaribas, and their gods, on the best dates to perform FGM on pubescent girls. Considered a rite of passage into womanhood, the cut makes a girl eligible for marriage and secures a handsome dowry for her family. 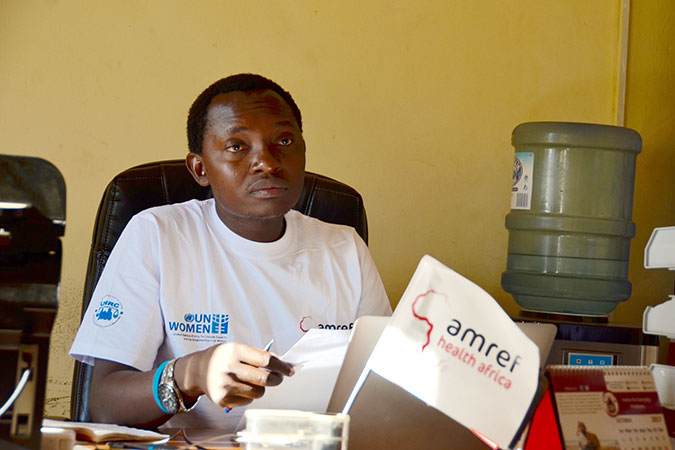 “We need to demystify and break the silence around FGM,” says Hodan Addou, UN Women Representative in Tanzania. “It is an assault on the life and dignity of women and girls, a human rights violation. We are working with the Government of Tanzania and gender equality advocates for the prevention of FGM and other forms of violence against women and girls through the implementation of the National Plan of Action to End Violence Against Women and Children.” UN Women partners with local communities to conduct advocacy campaigns to raise awareness; enhance access to justice and resources for all survivors of violence; and increase capacities of the service provides to handle reported cases of violence against women and girls.

“We want our girls to study. We want them to succeed as doctors, engineers, nurses and business-owners, and then to come back to village and help others.”

The safe house in Mugumu has ten rooms, each with four bunk-beds, and small cubbies to store personal items. Built to accommodate 40 girls, as of November 2017, the safe house provides shelter to 76 girls. “Sometimes we put 2-3 girls together on one bed, or use the floor,” adds Kiwori. “During the high season, we have sheltered over 300 girls”.

Every high season, many girls die due to heavy loss of blood or infection after being cut, and those that survive the procedure, carry the pain and trauma with them. Fearing for their lives, girls as young as seven escape to the safe house, which provides them shelter and protection.

Twenty kilometers east of Mugumu, religious and traditional leaders of Nyamakendo have made an important decision. The chairperson and highest authority of the Inchugu clan in Tanzania and Kenya, Masonoro Marwa, awaits the UN Women team in their sacred forest house. Women and outsiders are usually not permitted to enter, but Marwa has made an exception this time. In a historic declaration that follows, fifteen local leaders announce their intention to prohibit the practice of FGM in their villages. 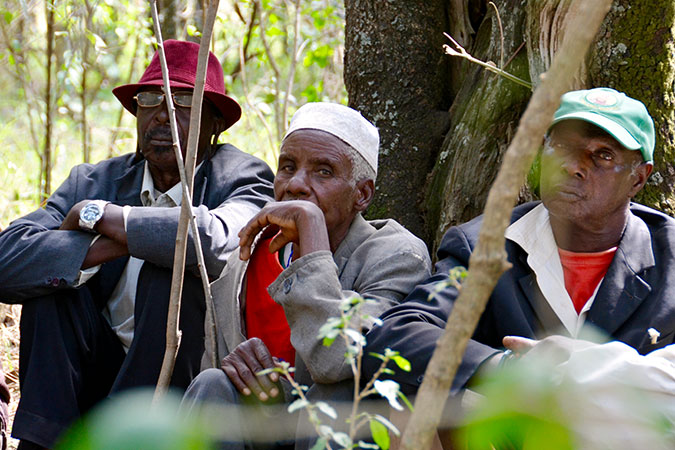 Chairperson of the Inchugu clan in Tanzania and Kenya, Masonoro Marwa, seated (center) in the forest state house in Nyamakendo forest, Mara. Women and outsiders are usually not permitted to enter, but Marwa has made an exception this time. Photo: UN Women/Deepika Nath

“We want our girls to study,” asserts Marwa to the gathering, “We want them to succeed as doctors, engineers, nurses and business-owners, and then to come back to village and help others.” Marwa, with the support of Amref Tanzania, is now advocating for village elders and leaders of other clans to commit to the Declaration to End FGM in the region. 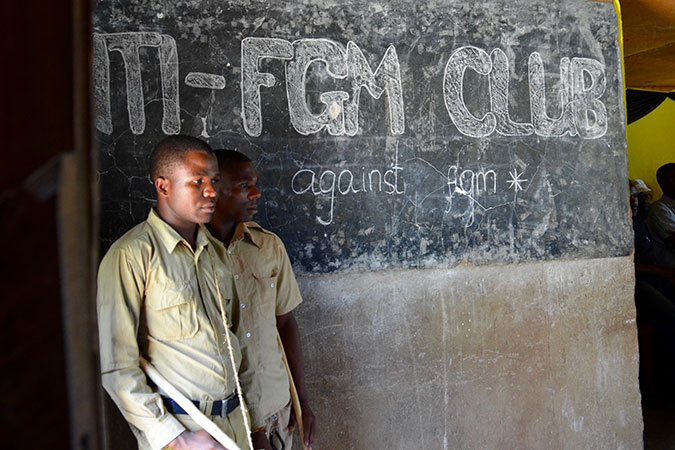 In an educational play performed in front of their school, members of the Anti-FGM club prepare for acting roles as police officers that apprehend FGM practitioners. Photo: UN Women/Deepika Nath

“So many women have bled to death because of FGM. Some families still practice in secret, but if the members of the club find out, they are instructed to call the police immediately”

It is almost end of the school day at the Ngoreme Secondary School, three hours from Mugumu, where 20-year old Paul Samwel is helping students stage a school play on FGM. Samwel is the chairperson of the students’ Anti-FGM club, which has 130 members and meets every Thursday under an acacia tree to discuss innovative ways to prevent FGM in the region. Samwel, who is the first of five siblings, has publicly pledged to his village elders that his two younger sisters will not undergo FGM, and when the time comes, he will not seek a cut bride for marriage. 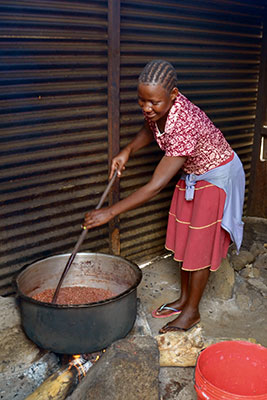 One of the girls of the Safe House helps prepare the dinner for all residents. Photo: UN Women/Deepika Nath

“So many women have bled to death because of FGM,” says Samwel. “Some families still practice in secret,” he adds, “but if the members of the club find out, they are instructed to call the police immediately.” FGM is criminalized in Tanzania since 1998, and carries a prison sentence for 15 years and/or fines up to USD 223. Outside the auditorium, students acting as the policemen prepare to arrest the traditional witchdoctor and circumcisers guilty of practicing FGM. This scene is the highlight of their play, and is always received with loud cheers of approval and laughter.

Back at the safe house, it is a little after sundown and seventeen-year old Elizabeth Thomas Mniko has just returned from her extra classes at school. Mniko is preparing for the upcoming national exams for senior secondary students—something she didn’t think would have been possible three years ago when her father registered her to undergo the cut. Mniko’s father has six wives and numerous children. She was the last of the uncut girls who was expected to fetch the dowry that would sustain the extended family. Unable to change her father’s mind, Mniko sought refuge at the safe house.

“I want to become a lawyer,” says Mniko from the top bunk bed of her room, “and defend the rights of all survivors of gender-based violence”. She is one of the longest residents of the safe house and its Head Girl. At school, girls are inspired by her, and the boys think she is a hero. 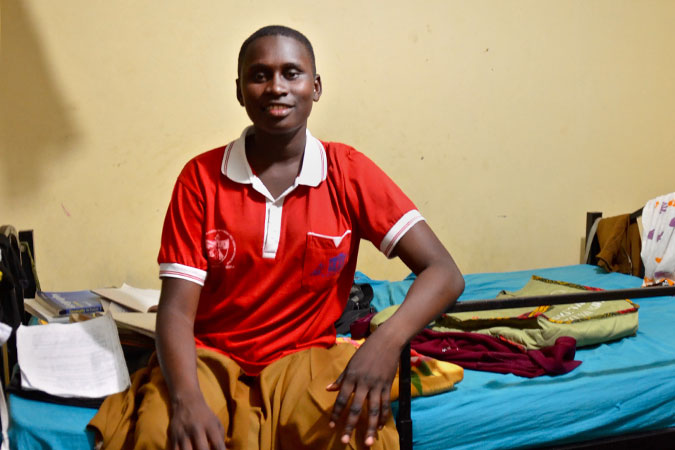 “It takes great courage to leave your entire world behind. Some of the younger girls here didn’t even know that it would be the last time they see their friends and families. They left thinking they could go back. But the families have rejected them”

“It takes great courage to leave your entire world behind,” adds Mniko. “Some of the younger girls here didn’t even know that it would be the last time they see their friends and families. They left thinking they could go back. But the families have rejected them.” A young girl in a red dress peeps into the room to signal Mniko –Kiwori is calling all the girls for dinner.

“Asha* walked for days and hitchhiked with strangers to get here,” Mniko says about the girl. “She’s not even 12, but she knew it was safer to run than stay in her village.” Asha will start classes in the next school year, having missed so much of the current term. But she is determined, adds Mniko, and wants to be a teacher.

“You must try the beans,” says Mniko, leading us to the courtyard where dinner will be served. “They are our specialty.”

Note: *The name has been changed to protect the identity of the survivor.