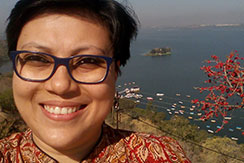 Subhalakshmi Nandi leads the women's economic empowerment portfolio at UN Women’s Multi Country Office for India, Bhutan, Maldives and Sri Lanka. She is a feminist development professional, with 15 years’ experience in the UN and with civil society organizations, and has worked on diverse issues of gender equality and women’s rights. Her work involves research, policy advocacy and programme management, with a focus on empowering the most marginalised rural communities of South Asia.

We are walking in the hot summer heat, in a village in the drylands of Uttar Pradesh (UP), a northern state of India. As we come across a group of men and women digging a well, one of the women uses the makeshift pulley to pull up a pail of cool water. “Drink, sister,” she says. “The well is now 130 feet deep, and we are yet to get the full flow of water. I remember the time when water was available at less than 40 feet.”

We are visiting this village to conduct a feasibility study for a livelihoods programme that could increase agricultural productivity and incomes for the participating households. As part of a public works scheme under the Mahatma Gandhi National Rural Employment Guarantee Act (MGNREGA), the government is providing wage employment to rural men and women digging the well. The law gives the guarantee of 100 days of employment a year, at minimum wages. Often, jobs like these are the only means of income for rural households in the lean agricultural season.

In 12 years of this programme, women have begun earning (almost) equal wages to men, improved their standard of living by investing in assets, education and food security, and in places, also broken out of the shackles of bonded and forced labour. Having guaranteed wage employment has provided much needed social protection and prevented seasonal migration out of the village.

As we talk to the well-diggers, we learn that this district has been facing droughts continuously for the last six years. For a community that is dependent almost entirely on rain-fed agriculture for their livelihood, the impact of such frequent droughts is devastating. Here, one sees first-hand the effects of climate change on poor farmers, especially women farmers.

The women we met can be found all over India, where 79 per cent [1] of rural women workers are engaged in agriculture, and they do more than 60 per cent of the work [2]. Two out of three women do not have access to water supply in their homes; they have to walk miles—longer miles than before— to collect water for household use and farming. More than 65 per cent of Indian households are dependent on wood, cow dung cakes and crop residue for fuel. It is the women who bear the drudgery of arranging for fuel, often having to fetch firewood from rapidly disappearing forests. Energy access was never so crucial. It is a matter of subsistence and survival. And the lion’s share of work that goes behind energy access, is a woman’s daily work.

While women do most of the backbreaking work in agriculture, they are not recognized as farmers. Instead, they subsidize this work in the form of unpaid family farm labour, or as underpaid wage labourers [3]. The only Time Use Survey ever done in India showed that women spent 51 per cent of their time in unpaid work [4].

This unpaid work burden is compounded by climate-related health risks, crop failure, financial crisis, environmental degradation, disasters and infrastructure breakdowns. Women in such situations become the default—and mostly invisible—‘shock absorbers’ and toil that much harder to feed themselves and their families. Even where rural employment opportunities open up for them as community health workers or as providers of child development services, their work continues to remain voluntary, underpaid and incentive based, even under flagship schemes of the government.

The Rural Employment Guarantee Act of 2005 is the first national law to have recognized women’s unpaid work burden. It aims to create livelihoods assets for farming communities, such as ponds, wells and soil water conservation structures. This is the ‘work’ that women have always done unpaid on the farm. The law makes this work ‘visible’ and remunerates women. Through research, advocacy and training of government officials as well as of rural women, UN Women helps to increase the awareness of the value of women’s work and about the Rural Employment Guarantee Act. Where participation of women under the Rural Employment Guarantee Actis low, UN Women works to increase their participation. For example, as a result of this work, in the Bareilly district of Uttar Pradesh, rural women’s participation in waged employment has increased from 3 per cent to 21 per cent within six months of the intervention in 2015. We also work with civil society alliances, such as MAKAAM [5] (Mahila Kisan Adhikar Manch: Forum for the Rights of Women farmers), to address the persistent poverty and vulnerability of women farmers and rural women, and to build their resilience in the face of rising insecurities brought by climate change [5].

Our interviews and observations for the feasibility study concludes around 2.00 p.m.. By then, the women have rushed home to attend to elderly parents, young children and to cook the afternoon meal. Even when women ‘work’ outside the home, they still have domestic ‘work’—the work that makes work happen and sustains entire families. This work—of care—is even more gendered, and rarely recognized as valuable work. Even in the absence of time use surveys, recent labour surveys reveal that more than 80 per cent women in India report their time goes in domestic duties [7] and women do almost seven times the domestic and unpaid care work as men [8]. Estimates reveal that the total value of time spent on unpaid care and domestic work by women in India is equivalent to 39 per cent of GDP [9].

A UN Women-supported civil society Collective on Women’s Unpaid Work (in India), comprising of over 200 women’s rights, child rights and labour rights experts, and feminist economists, aims to recognize women’s work, and to inform the dominant discourse on ‘work’ accordingly. It is currently documenting the paid-unpaid continuum of women’s work, and identifying policy needs in the context of care, energy and water access.

We are in the second year of implementation of the ambitious and transformative Sustainable Development Goals, which all countries adopted as a roadmap to a more equitable, just and sustainable world by 2030. To fulfil these goals—particularly the goals on ending poverty and hunger, and achieving gender equality and sustainable economic growth—we must recognize the continuum of women’s work to include subsistence, care and livelihoods. We must also enable their continued contribution to the economy, society and environment, through reduction and redistribution of their unpaid work.

[4] India Ministry of Statistics and Programme Implementation (1998). Time Use Survey 1998, Available from http://mail.mospi.gov.in/index.php/catalog/130

[5] MAKAAM (Mahila Kisan Adhikar Manch – Forum for Rights of Women Farmers), a nationwide alliance of women farmers, their associations, and organisations and individuals that support them; currently with a presence in 24 states: http://www.makaam.in/

[7] Sunita Sanghi, A Srija, and Shirke Shrinivas Vijay (2015). Decline in Rural Female Labour Force Participation in India: A Relook into the Causes Available from http://niti.gov.in/writereaddata/files/document_publication/Decline%20in%20Rural%20Female%20Labour%20Force%20Participation%20in%20India.pdf

Related News
08/06/2022
A comprehensive approach to ending violence against women in rural spaces in India
01/10/2019
From where I stand: “Now I have bigger dreams”
06/09/2019
Boosting harvests for women in the hills of Nepal
24/04/2019
From where I stand: “Local and global political and economic systems create and maintain social inequality”
11/10/2018
We are equal, we are important, say nofotane women of Samoa
END_OF_DOCUMENT_TOKEN_TO_BE_REPLACED