In the words of Ani Jilozian: “Ultimately, this violence stems from patriarchy” 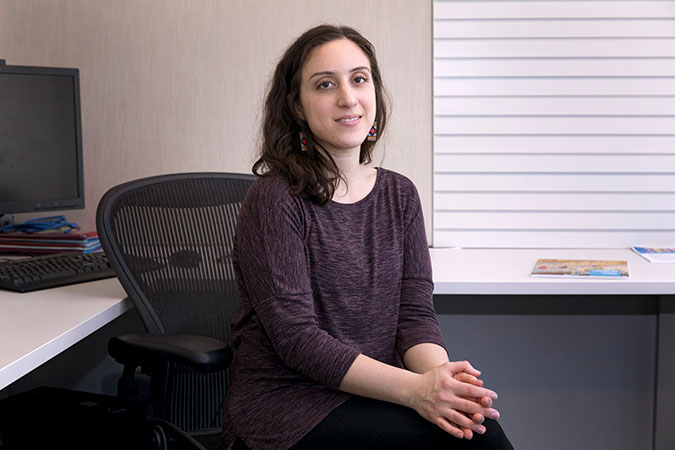 Ani Jilozian, 31, is the Research and Data Specialist at the Women’s Support Center in Armenia, which has been supported by the UN Trust Fund to End Violence against Women (UN Trust Fund), which is managed by UN Women on behalf of the UN System, for the period of 2015-2017. The Women’s Support Center is a domestic violence centre based in Yerevan, Armenia, offering comprehensive services to women and children survivors of domestic violence. The services include psychological, legal and social counseling, as well as safe houses and facilitation of educational opportunities to help survivors find employment or start their own businesses. The project has reached seven of the ten regions in Armenia in the span of 1.5 years and trained nearly 250 police, social workers, educators, psychologists and civil society members to work with survivors of domestic violence. In a recent conversation with UN Women, Ms. Jilozian talked about the current situation in Armenia, her work with survivors and the progress made so far.

I hadn’t initially planned to work on violence against women. In a way, it chose me. I was working on women’s health in Armenia, and a lot of the problems that women were facing stemmed from violence and infringement of their rights.

In post-soviet Armenia, the trauma of war, poverty and socio-economic inequalities exacerbates violence against women. But ultimately, this violence stems from patriarchy, and from the idea that a man possesses his wife or that a mother-in-law can control her daughter-in-law.

These cultural and institutional barriers are the most difficult issues to overcome for women in Armenia. Tackling domestic violence is perceived as destroying the Armenian family. Violence against women is seen as a normal part of life. Women stay in abusive relationships for 10, 15 or even 20 years, before seeking our services because it is taboo to talk about the issue. The fact that there isn’t any legislation to prosecute abusers legitimizes the cultural tolerance of violence.

We have been pushing for a domestic violence law for several years now and we are working to raise awareness about the issue in the society, and we need these two things to happen in tandem. We had a case a year ago where the woman was abused for 15 years, and her oldest daughter sexually harassed by the abuser. In the absence of a (domestic violence) law, he got off by paying a penalty of USD 300, which is equivalent to a month’s salary in Armenia. We need to change perceptions, but at the same time, we need justice. Knowing that you work within a system that is set up against women is the biggest challenge for me. How can you stop violence against women if you are not providing women with security and financial stability?

In an ideal situation, we wouldn’t need safe houses. In a country like Armenia, a survivor would prefer to seek assistance from loved ones, friends and family. But in situations of domestic violence, where the abuser is family and threatens her life, the only safe option for a woman is the safe house. We provide women survivors with options and assist them, but we don’t make decisions for them.

I have learned so much from the survivors. Their resilience to overcome trauma and to rebuild their lives is inspiring. For example, to see a woman not only escape a life-threatening, abusive situation, but thriving, starting her own business, caring for her children and for her elderly parents is simply amazing.

Five years ago, there was almost no media coverage on domestic violence. Now we see roughly 40 to 50 articles per month in the country. People have started talking about it…it’s a start."