The first-ever study on men and masculinity in the Middle East and North Africa by UN Women and Promundo surveyed 10,000 men across Egypt, Morocco, Lebanon and Palestine. While unequal attitudes dominate, a significant minority support some forms of equality between men and women, especially if they saw their fathers doing the same.

A groundbreaking multi-country study in the Middle East and North Africa (MENA) region has surveyed 10,000 men aged 18 to 59 years, in Egypt, Morocco, Lebanon and Palestine, about their attitudes on gender equality and perceptions of masculinity.

Applying a comparative lens to the lives of men and women, the study asked, for example, what does it mean to be a man in the Middle East and North Africa region in 2017; what do men of all ages think about gender equality; and how are ideas about masculinity affected by political and economic stresses?

The study, titled “Understanding Masculinities, Results from the International Men and Gender Equality Study in the Middle East and North Africa” (dubbed IMAGES) is produced by UN Women and Promundo, a global NGO that works on promoting gender justice and preventing violence by engaging men and boys, and in collaboration with local research partners. It’s the first of its kind in the region, both in terms of the size and topic. Even as attention towards expanding women’s rights in the region has been growing, knowledge and data on men’s attitudes and their perspectives on gender equality were lacking. Since men frequently dominate public and private decision-making spheres, understanding where they stand is critical to developing policies and programmes that foster gender equality.

This number needs to change to zero! Check out our new study on masculinities in MENA by @unwomenarabic @Promundo_US https://t.co/Ky12jSXFMH pic.twitter.com/gUPO8Qrcd3

Overall, majority of the men surveyed in the four countries support a wide array of inequitable, traditional attitudes. However, a sizeable minority—a quarter or more men supported at least some dimensions of women’s equality and empowerment. The factors associated with men’s favourable attitudes towards gender equality included education, family influence and life circumstances. The research also showed that men whose wives worked outside the home were more likely to participate in care work at home. This signals enormous potential for gender equality outcomes by promoting women’s paid work in the region, where currently only one in four women work outside the home. Along with men, women were also part of the survey, and while most women shared similar attitudes as men, however, younger women tended to have more progressive views.

Surprisingly, in every country except Lebanon, younger men’s views on gender equality do not differ substantially from those of older men. The economic stress experienced by Arab men may be one of the reasons behind this. Around half of the men surveyed across all four countries said they felt stressed or ashamed to face their families because they didn’t have sufficient work and income, or they were fearful for the safety of themselves and their families, especially in conflict areas. 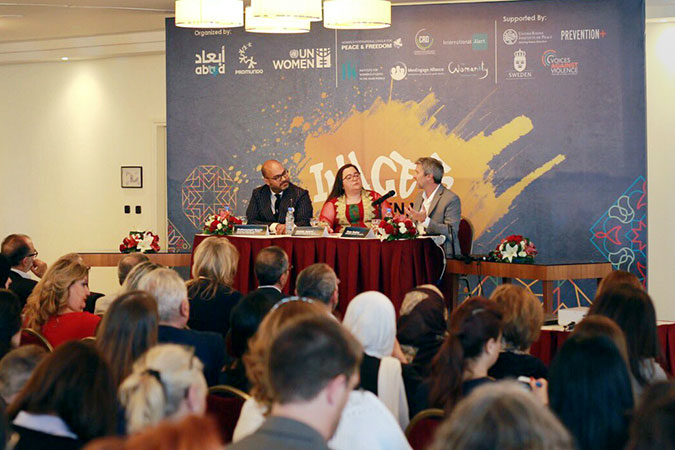 The “Understanding Masculinities, Results from the International Men and Gender Equality Study in the Middle East and North Africa” launch event in Beirut Lebanon on 2 May.

The study’s findings were launched at an event in Beirut, Lebanon, on 2 May, as part of the “Masculinities in the Arab World” conference co-organized by UN Women, Promundo and Abaad, a national NGO working on gender equality and women’s empowerment. A film featuring male champions for gender equality from the region was also screened as part of the event.

"My wife is working abroad 75 per cent of the time," says Adnan Melki from Lebanon in the IMAGES film. “While she is away, I take care of my children and their needs. We always help each other, so whenever I have work, she looks after the kids and vice versa. We constantly face judgments and social pressures, but (many) others see us as role models."

Key recommendations of the IMAGES study:

The research confirms international findings on the inter-generational cycle of violence and the positive influence of sharing care work. Fathers were found to be particularly influential in shaping male and female children’s perceptions and behaviours. For example, men who witnessed their fathers using violence against their mothers, and men who experienced some form of violence at home as children, were significantly more prone to perpetrating intimate partner violence in their adult relationships. On the other hand, in all four countries, men whose fathers had participated in household work and caregiving, were far more likely to participate in care work within their own marriages. Fathers who encouraged their daughters to work outside of home, take up non-traditional professions and choose their own husbands, contributed towards gender-equal attitudes among the women in the household.

“For our work as UN Women, this report is incredibly important as a tool to inform our programming, advocacy and in our efforts to work with governments, civil society and communities. The results, though they may seem bleak when looking purely at numbers, do affirm that there are also true stories of men and women who believe strongly in gender equality, and that’s a good start," says Mohammad Naciri, UN Women Regional Director for the Arab States.

“There is a long way to go for men to fully accept and support equality for women in the Arab region, as in many parts of the world,” says Gary Barker, President and CEO of Promundo and co-author of the study. “This research helps to better understand the dynamics of male-female relations in the MENA region, and to subsequently design and improve programmes and policies to address them,” he adds.

What do men in the Middle East and North Africa think about women, families, masculinities? New study: https://t.co/Ky12jSXFMH @Promundo_US pic.twitter.com/EAUNqjqq90

The study has started a much-needed conversation about masculinity in the region, and its findings and recommendations give UN Women and partners a strong basis for shaping community outreach activities and campaigns to change prevalent social norms.

To access the full report, executive summary of the study, infographics and more, visit www.imagesmena.org

Related News
24/03/2016
What if we switched roles? new social experiment raises awareness of gender stereotypes in the Arab region
31/03/2015
Give mom back her name: #MyMothersNameIs
27/01/2022
Gender equality starts at home: How three couples in Lebanon are reshaping norms
18/11/2019
The men who are standing tall against early marriages in the Gaza Strip
24/04/2019
Take five: We need “initiatives to raise the status of women, led by Muslim leaders”
END_OF_DOCUMENT_TOKEN_TO_BE_REPLACED