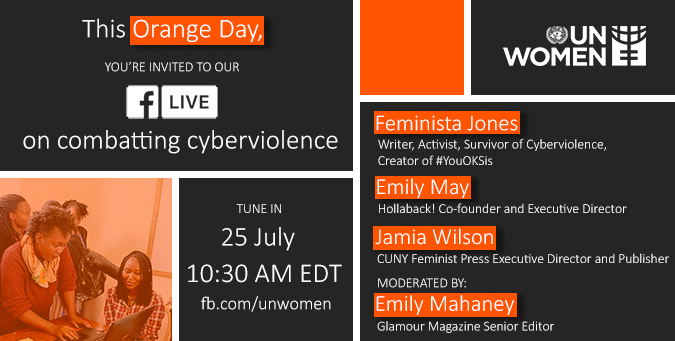 On 25 July, UN Women will broadcast a Facebook Live conversation on combatting cyberviolence with experts and survivors, beginning at 10.30 a.m. (EDT).

On the 25th of every month, UN Women and the Secretary-General’s UNiTE to End Violence against Women campaign commemorate Orange Day, a day to take action to raise awareness and prevent violence against women and girls.

This Orange Day focuses on cyberviolence. In the 21st century, women’s and girls’ access to Internet and Communications Technology is a core indicator for women’s empowerment. It is therefore vital that the internet is a safe place that allows all women and girls to fulfil their potential as valued members of society and live their lives free from violence and fear. However, a 2017 study found that while more men than women in the U.S. report having experienced some form of online harassment, the types of violence and the gravity differ a lot.

Of women in the U.S. who have experienced any form of online harassment, 35 per cent say they found their most recent incident to be “extremely” or “very” upsetting, which equals more than twice the share among men. Some 21 per cent of women ages 18 to 29 have been sexually harassed online, a figure that is again more than double that of men in the same age group.

Panelist Feminista Jones is a writer, community activist and survivor of cyberviolence. She created the hashtag #youOKsis on Twitter. Jamia Wilson is the new director and publisher of Feminist Press at City University of New York, where feminist authors are frequently confronted with online harassment. Emily May is the Co-Founder and Executive Director of Hollaback!, an organization which started off fighting street harassment and moved on to include combatting online harassment through their HeartMob project.

The conversation can be followed live or archived on www.facebook.com/unwomen.