From where I stand: “We are not the ones to be shamed! Our attackers should be ashamed and prosecuted!”

Dina Smailova, survivor of gang rape, decided to break her silence 25 years after the attack. Today, she leads the national movement against sexual violence in Kazakhstan. 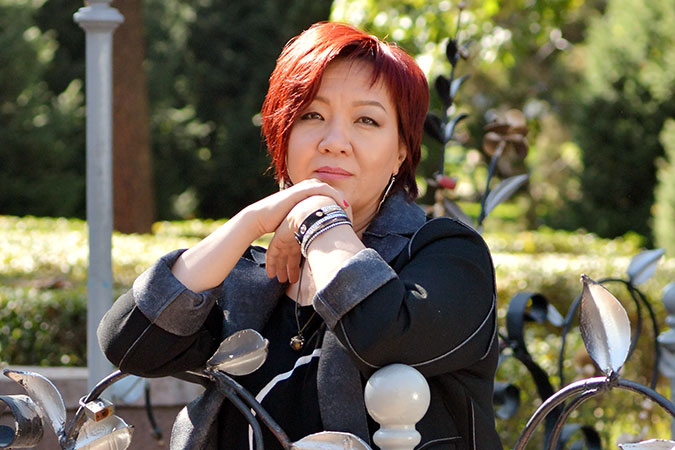 When I was twenty, I was raped by a group of my classmates after our friend's wedding. My mother didn’t even try to listen to me…she said I had shamed the family and rented an apartment for me on the outskirts of the city. For 25 years, my rape stayed a secret. For 25 years, I trembled, silently, every time I heard about rape; I lost ties with relatives and close friends, and resented my mother for turning her back on me.

Last year, after years of counselling, I broke my silence. When I posted my story on Facebook, I immediately started receiving comments and private messages from thousands of women, who were harassed, raped or beaten up. I realized that my mission in life was to help women in Kazakhstan end this terrible violence.

UN Women in Kazakhstan gave me all the support I needed at the time—trainings, meetings with other activists, meeting with government officials. For the first time in Kazakhstan, we started talking openly about the issue, at the highest levels of the government and in the remote villages and towns, where we organized public awareness events.

Our movement helped other survivors of sexual abuse break their silence, report the abuse and win their cases. One such survivor was Zhibek Mussinova who reported her rape to the authorities and the perpetrators were sentenced for 8 – 10 years. Her case made news, because it was the first time that a survivor of gang rape and her family had openly fought for justice.

I want to help more women speak out and change the attitudes within our communities. We are not the ones to be shamed! Our attackers should be ashamed and prosecuted.”

Dina Smailova, 48, is a women’s rights activist and former producer of children’s entertainment programmes in Kazakhstan. A survivor of gang rape, she initiated the NeMolchi movement, which means Don’t Keep Silent, and started a public discourse on sexual violence, an issue that impacted 2,481 women in Kazakhstan in 2016 alone. She has consulted, guided and supported 200 women survivors and was instrumental in winning seven sexual violence cases just in the past year. Ms. Smailova’s work contributes towards Sustainable Development Goal (SDG) 5, which aims to empower all women and girls and specifically targets to end violence against women. She has been recently nominated by UN Women Executive Director Phumzile Mlambo-Ngcuka for the “SDG 5 Dream Team” to play at the Global Goals World Cup, an initiative by Eir Soccer, the Danish Permanent Mission to the UN, UNDP, Save the Children, UN Women, Women Deliver and the City of New York. The Global Goals World Cup is a women’s soccer tournament to raise awareness on gender equality and the SDGs and will take place on 19 September in New York City.

Related News
22/11/2019
Take Five: “We should not tolerate any violence and should not be bullied into silence”
12/11/2021
Believe Survivors. Act Now. Milena’s Story, Moldova
09/04/2020
From where I stand: “The fact that domestic violence is not a criminal offence in Kazakhstan is hurting women during COVID-19 crisis”
18/11/2019
I am Generation Equality: “I am a child born out of wartime rape”
18/11/2019
I am Generation Equality: Fatmira Dajlani, child marriage survivor and activist
END_OF_DOCUMENT_TOKEN_TO_BE_REPLACED