From where I stand: “Women need to live a life without violence”

Marie Goretti Ndacayisaba is the Executive Director of Dushirehamwe (meaning, ‘let’s be together for peace’) in Burundi. She promotes women’s role in peacebuilding. In a conversation with UN Women, Ndacayisaba talks about her own journey as a peacebuilder, the current situation in Burundi and why we must engage women. 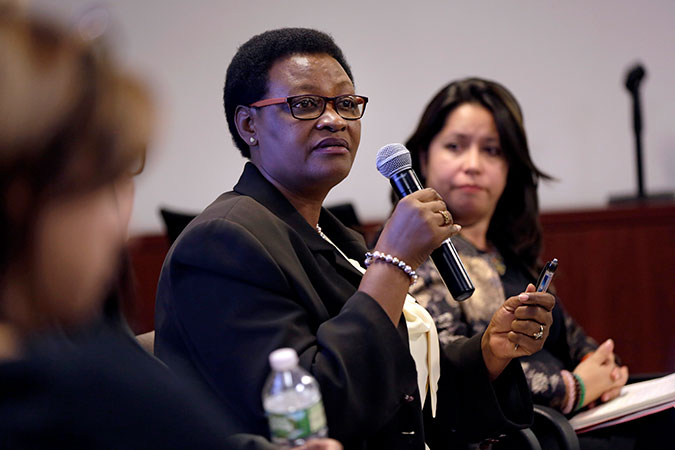 We all lost so much in the crisis…I started this work because I wanted my children to live a better life, to overcome my own pain, and be useful for my community.

Peace is for everyone. It is up to everyone to build peace. During crisis, different political powers struggle for power, while others are looking for food and water. We all have different needs and interests.

When we start engaging women in conflict transformation, we start by asking them to analyze the problem, understand the root cause, so that they can see beyond the manifestation of the problem. Whether it is political violence or domestic violence, we teach them to ask, why is this happening?

Right now, in Burundi, I see injustice, impunity and poverty. As a woman, the hardest thing for me is to face other women who have been victims of violence, who have lost their children. Sometimes, I feel powerless. But when I work with other women, for our lives and for peace, I feel powerful [again].

The international community must keep its focus on Burundi. The UN resolutions must be implemented. Burundians are suffering—in Congo, in Tanzania, and elsewhere—they need to be able to come home and be part of an inclusive dialogue. Women have a lot to say, and they have expertise to conduct peace dialogues. We need to enable women from the country and the diaspora to work together, for peace.

Marie Goretti Ndacayisaba, 55, is the Executive Director of Dushirehamwe, a national women’s network in Burundi working in peacebuilding, conflict resolution and women’s leadership, supported by UN Women through the Women’s Peace and Humanitarian Fund. Between 1993 and 2005, the civil war in Burundi killed almost 300,000 people and left hundreds of thousands displaced. In 2015, political unrest plunged the country back into protracted crisis. In October 2017, Ndacayisaba spoke at a side event at the United Nations, co-organized by UN Women, Impunity Watch and Oxfam IBIS, with the support of the Permanent Mission of the Kingdom of the Netherlands to the United Nations. Her story shows the importance of engaging women in peacebuilding efforts at all levels to fulfill the vision of Sustainable Development Goal 16, which promotes peaceful and inclusive societies.

Related News
07/05/2019
A place of peace, reconciliation and growth
26/01/2016
African representatives push for action to bring women to the peace table
25/01/2016
Women mediators promote peace in Burundi
27/05/2021
UN Women Executive Director visits Mozambique, calls for women’s leadership in peacebuilding and ongoing humanitarian efforts, and bold commitments for the Generation Equality Forum
20/10/2020
From where I stand: “It won’t be easy… reach out, grab the baton and keep running forward”
END_OF_DOCUMENT_TOKEN_TO_BE_REPLACED