Across Latin America, women fight back against violence in politics

Currently, Latin America is leading globally in local and parliamentary positions held by women. But the journey to political participation is fraught with rising violence and intimidation against women in politics. In the age of #MeToo, we bring you the voices of Latin American women who are raising their voices and running for office, against all odds. 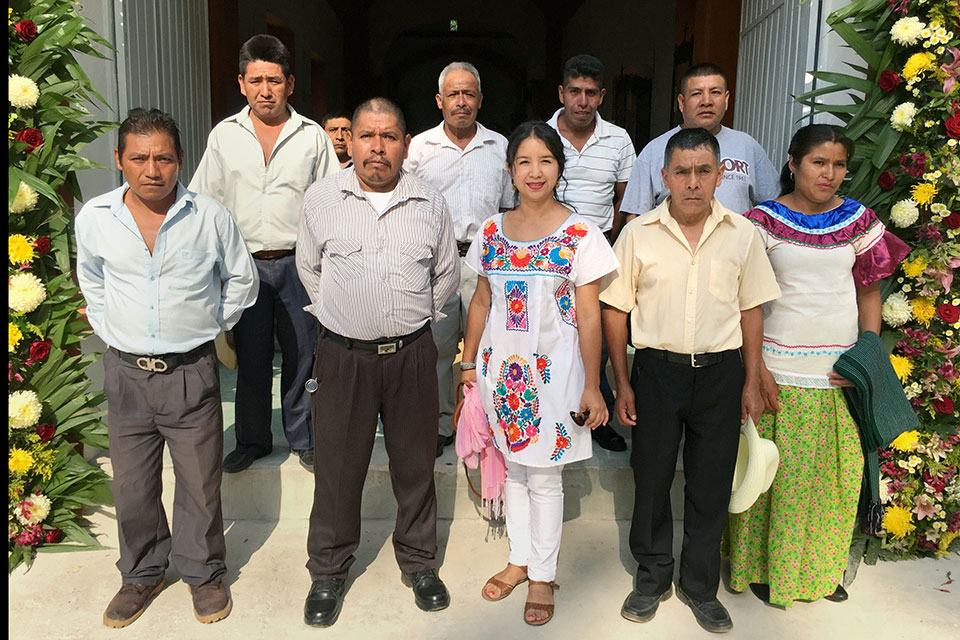 As an indigenous women’s rights activist in southern Mexico, Elisa Zepeda Lagunas has experienced the kind of violence that would shut people down. She was dragged to the town square and nearly hacked to death with a machete, her house was burned down and her brother was killed.

A 2016 study on sexism, harassment and violence against women in parliament from 39 countries across five regions and 42 parliaments found that:

“We were ambushed… to stop the movement I led,” explains 34-year-old Zepeda Lagunas.

“They told me: ‘this is what happens when you get involved in matters that don’t concern you.’… They tortured me and did things to me that I still have trouble speaking about.”

Zepeda Lagunas, however, did not stop her activism. She persevered and sought public office, getting elected as the first female mayor of the municipality of Eloxochitlán de Flores Magón, in the Teotitlán District of the Mexican State of Oaxaca, in 2016. In July 2018, she was elected to the Oaxaca State Congress.

“Despite all the risks, I ran because it is a great opportunity for me to raise my voice to another level, as a legislator, and we have so much work to do,” she says. “It is essential for me to occupy these spaces and to open them for others.”

Currently, in Latin America, women hold 27.3 per cent of local positions as council members or councillors, an increase of 6.5 per cent in the last 10 years.

But the journey has not been easy for female politicians in Latin America, where harassment, threats and even death, have made it a risky career choice. This is true even in ground-breaking Bolivia, where women account for 53.1 per cent of Parliamentarians—the third-highest percentage globally—and 44.1 per cent of local councillors (in 2014).

“Ours was a battle waged on the streets, in prisons, with blows… It cost us a lot of blood and many deaths,” explains Leonida Zurita, who began her political career as a farm union activist before becoming the first woman to lead the Regional Assembly in Cochabamba in 2015. In 2017, she was nominated President of the Association of Women Departmental Representatives of the Plurinational State of Bolivia (AMADBOL), which was created with technical and financial support from UN Women. 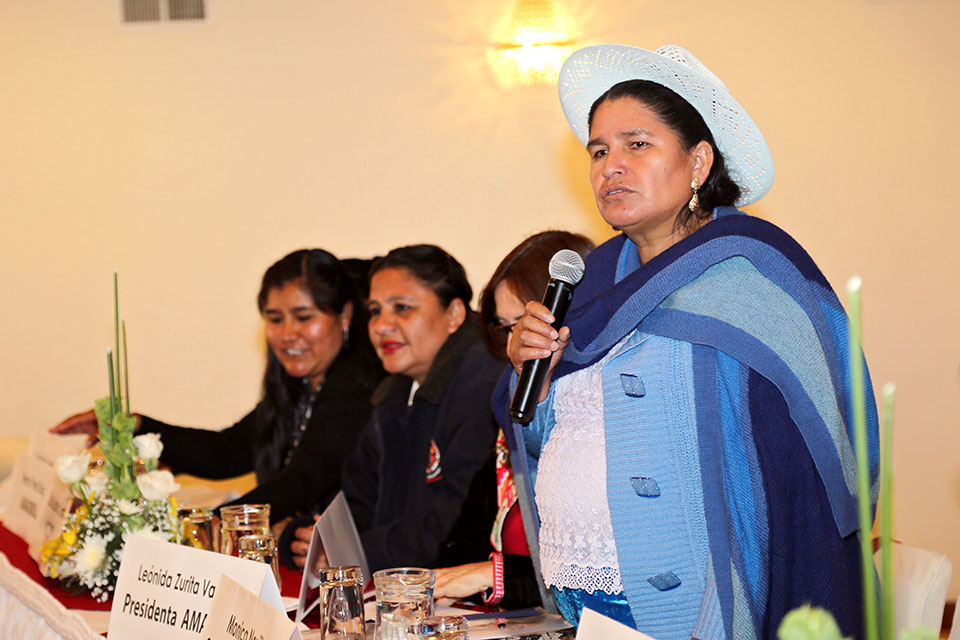 Zurita says representation has improved greatly for women, thanks to legislation and a new Constitution, but harassment and political violence remain rampant.

The 2012 murder of local Bolivian councillor Juana Quispe—who had filed harassment complaints and was championing a law to protect female politicians from violence—and the killing of local councillor Daguimar Rivera Ortiz a few months later, fuelled demands for a law to tackle violence against women in politics.

Bolivia’s landmark law against harassment and political violence against women (Law 243) was passed in 2012, becoming the first—and still the only—stand-alone law of its kind in the world. UN Women provided technical and financial assistance for this legislation, which provides two- to five-year prison sentences for anyone who pressures, persecutes, harasses or threatens a woman exercising public functions, and up to eight years in prison for committing physical, psychological or sexual aggression.

But Bolivia’s legal reforms “did not change patriarchal systems or machismo culture overnight and the backlash against women in politics has been swift and widespread,” explains Katia Uriona, former President of the Electoral Tribunal of the Plurinational State of Bolivia. A long-time UN Women partner, she took part in an Expert Group Meeting  on Ending Violence against Women in Politics co-organized by UN Women in March 2018.

Uriona says Law 243 has been invaluable in bringing visibility to the issue, although challenges remain in its implementation, as not a single case has resulted in a conviction. 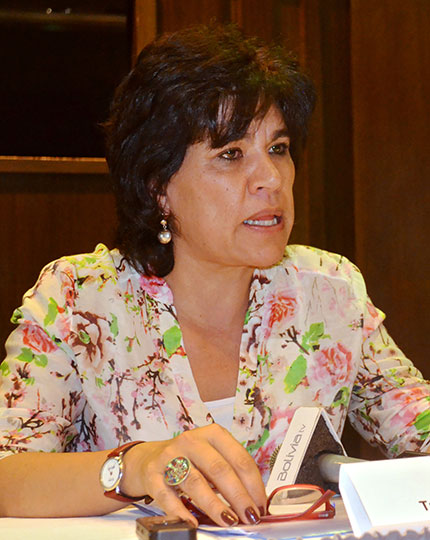 A recent study by Bolivia’s Women’s Coordination network (Coordinadora de la Mujer), a grantee of UN Women’s Fund for Gender Equality, revealed that between 65 and 70 per cent of women Parliamentarians have been victims of harassment and political violence.

“The sad thing is that these forms of political harassment and violence are absolutely naturalized in politics and are part of the political culture, both of political parties and of the democratic system itself,” says Executive Director of Coordinadora de la Mujer, Mónica Novillo.

In 2017, UN Women provided assistance to Bolivia’s Supreme Electoral Tribunal, to create an Observatory for Parity Democracy against Harassment and Political Violence. It monitors both gender and intercultural parity and the political rights of women, as well as tracking and raising awareness around women’s political participation (including violence) and generating data.

As part of continuing efforts, a law on parity in Bolivian political parties—with a section on violence against women in politics—was put before the Legislative Assembly in June of this year and approved on 1 September.

UN Women has worked alongside partners bolstering advocacy efforts to raise awareness of such violence, including during the impeachment process against former Brazilian President Dilma Rousseff, highlighting several situations of political violence directed against her during 2015 and 2016.

In partnership with civil society and local mayors, UN Women has been working to make violence against women in politics more visible before and during electoral processes, and to promote women’s political participation. As part of the Brazil 50-50 initiative to achieve gender parity in politics, an independent data journalism initiative called “Gênero e Número” (Gender and Numbers) is increasing the visibility of black, indigenous and LBTI women who are severely underrepresented in the political arenas, and political violence against women.

“It is necessary to bring women's rights to the centre of public debate in elections,” says Nadine Gasman, UN Women Representative in Brazil . “UN Women has developed platforms for Brazilian candidates to position themselves and to commit to the 2030 Agenda for Sustainable Development, with a focus on gender equality. We know that we cannot achieve sustainable development without the equal participation of men and women in politics.”

In Honduras, San Pedro Sula city councillor Fátima Mena Baide has faced repeated threats and aggression. At the age of 28, with a one-year-old son, she founded a political party, ran for and was elected to Parliament in 2014.

When she ran for mayor in 2017, she received a barrage of social media and text messages from fake profiles, telling her to take care of her child instead of running for office, or sending threats to her personal safety and that of her son. She was attacked physically: she was hit, a Congressman running for re-election pulled her by the hair, and she was kept from campaigning in certain districts because there was an order to kill her.

“What keeps women strong is knowing what they are experiencing is political violence against them, because they are women,” says Mena Baide, who also spoke at the UN Women-organized Experts Group Meeting in March. “Police are sometimes not even aware that this represents political violence. [They] don’t even know the term.”

Mena Baide went to the authorities, but police never filed a report. Reporting the incidents within her own party also proved futile. She says only women’s groups and the international community have shown her tangible support.

“If ‘protection’ means taking the woman away from her job, then who wins?” asks María del Carmen Alanís Figueroa, a Visiting Scholar at Harvard Law School who was Mexico’s first woman Chief Justice of the Electoral Court. 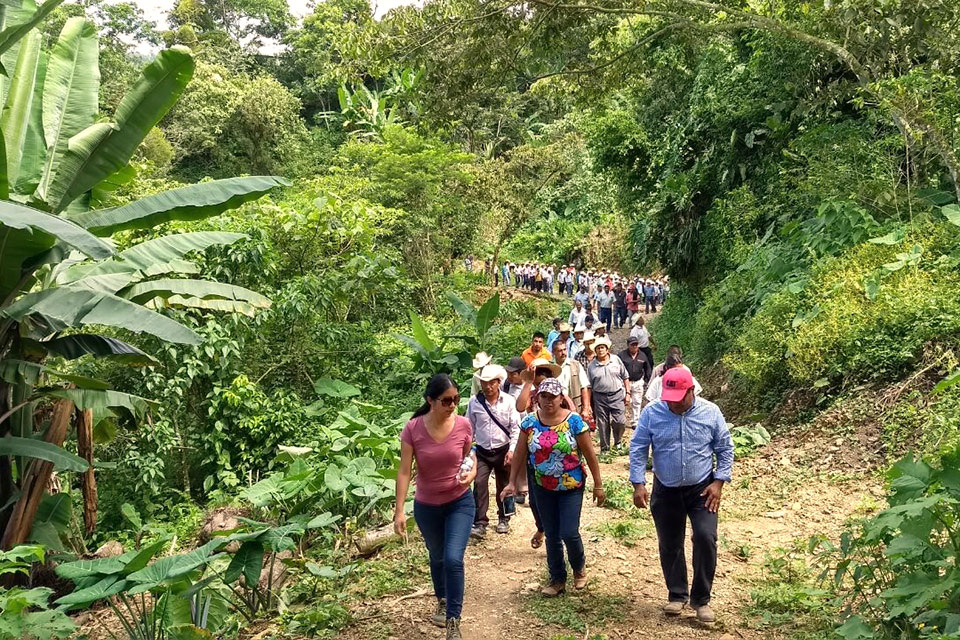 At the Experts Group Meeting in March, she detailed Mexico’s efforts to protect women politicians in the absence of a dedicated law. “We must sanction the perpetrator, the party. Protection of women in politics doesn’t mean to take her away from politics. We must do something different—that’s reparation,” She said.

In 2014, a step forward came when Mexico approved a federal judicial Protocol to Address Gender-Based Political Violence against Women (and updated it in 2017), with the Electoral Court as its main authority. UN Women Mexico also contributed to the development of a Model Protocol for Addressing Gender-Based Political Violence against Women aligned with the federal protocol, for the state of Oaxaca, which has spurred other state protocols across the country.

“The protocol is like a political statement acknowledging that there is a problem and there are institutions willing to act...” says politics and gender expert Mónica Maccise Duayhe, Head of the Gender Equality and Non-Discrimination Unit of Mexico’s National Electoral Institute. “At least it allows us to coordinate and we have a homogeneous instrument. But the protocol is not enough. We need additional mechanisms to close the gaps.”

Despite having more than 4,000 female contenders for the various levels of government in the recent July 2018 elections, Maccise Duayhe points out that only 38 cases of gender-based political violence were reported nationally, only three of which resulted in protective measures. She believes more women would report such violence if there were a law, or more forceful sanctions in place.

Despite all the risks, I ran because it is a great opportunity for me to raise my voice to another level, as a legislator, and we have so much work to do. History owes so much to women.” 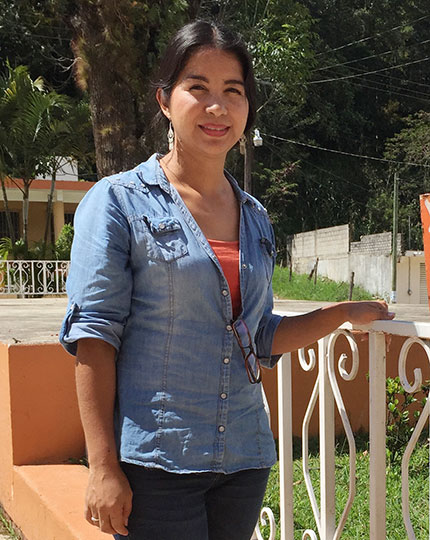 “But you can’t rely solely on legislative change, or a mechanism or the protocol,” she says. “We need better institutional coordination. We need to train judges. It’s a process.”

UN Women Mexico has worked to strengthen the capacities of governments, civil society organizations and women politicians, through regional training forums and its membership in spaces such as the Observatory for Women's Political Participation and the Working Group on Political Violence against Women.

Back in Oaxaca, Zepeda Lagunas is among the 23 women (vis-à-vis 19 men) who now make up the majority of the Oaxaca State Congress. The July elections saw record numbers of women elected across Mexico, including 48.2 per cent of the lower house of federal Congress and 49.2 per cent of the Senate—the third and fourth-highest rates globally.

“We want to start a training school for women’s political empowerment in the 41 municipalities in my district,” says Zepeda Lagunas. “We also want to typify violence against women in politics, because sentences are not being carried out in the few trials that have been initiated... Little by little, we are moving forward, and I feel like it has all been worth it.”

Related News
18/03/2021
Mexico joins Bolivia in efforts to stop violence against women in politics
09/11/2018
Take five: “Legal reform did not change patriarchal systems or machismo culture overnight”
13/11/2018
In the words of Elisa Zepeda Lagunas: “It is essential for me to occupy these spaces and to open them up for others”
11/12/2014
Around the world, women and men of all ages “orange their hoods” to end violence
12/11/2021
“There’s a long way to go”: Three women share their stories of overcoming political violence in Colombia
END_OF_DOCUMENT_TOKEN_TO_BE_REPLACED