In the words of Joanna Oala: “It’s better to speak up and let your voice be heard” 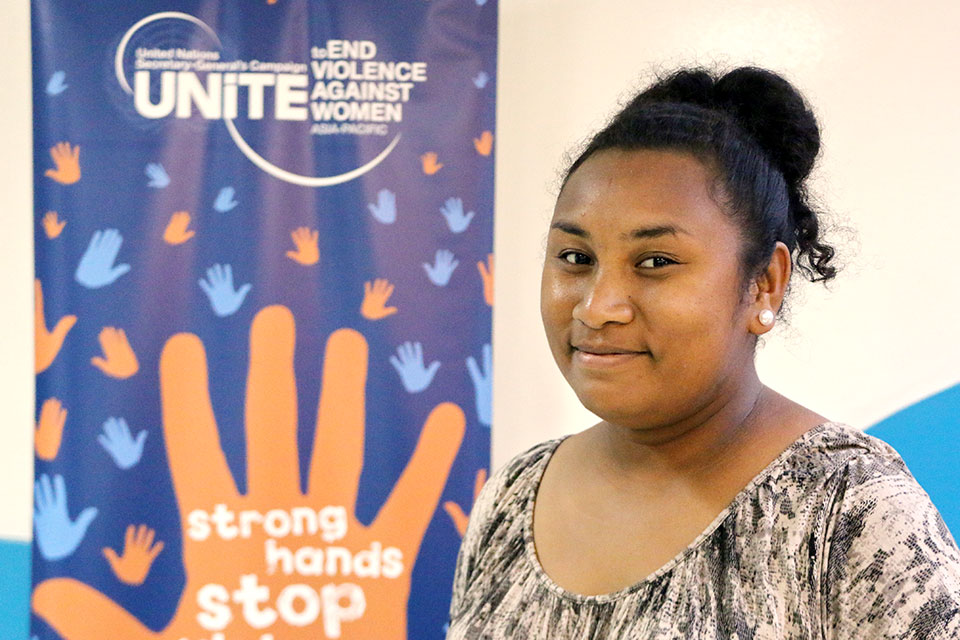 Two in three women experience gender-based violence in Papua New Guinea. Many do not know how to report the abuse or lack access to police, courts and services. Many more stay silent because of social stigma attached to violence against women, or they are simply too afraid to report their perpetrators. However, against all odds, women across the country are speaking out, not only in defence of their own rights, but those of others in similar situations. Meet Joanna Oala, 25, from Port Moresby, who has become a champion to end violence against women and girls. She is one of the volunteers of a UN Women-led campaign, SANAP WANTAIM, which has brought together men, women and youth from all walks of life to make Port Moresby safer for women and girls.

When I was growing up, violence against women was happening all around me and too often. I was 17 when I was sexually assaulted. It was like a nightmare that came true. I was afraid to speak up because of stigma and discrimination. I kept thinking, what would people think, say and feel about me… my friends would disown me or make fun of me… my family would hate me.

I sank into anxiety and depression. I tried seeking help by joining the Youth and Adolescent Health Club, but it didn’t help much initially. I started having suicidal thoughts. I did not see my value in the world, I felt worthless.

After suffering for three long years, I opened up and spoke to my close friends about what had happened and how it had affected me over the years. My friends encouraged me to share my story to save other girls from falling victim to abuse. That was the beginning of my journey to becoming an advocate for ending violence against women.

The journey wasn’t as simple or short as this story; it has been an emotional and mental battle for me. But still, I choose to stand up to advocate on this issue because I know that by sharing information, making people aware of gender-based violence and the visible and invisible scars it leaves on survivors, I can help other survivors and I can help create self-awareness among girls so that they know how to speak up and seek help.

I know so many other girls who have gone through this abuse. To them, I say, it’s better to speak up and let your voice be heard. Let us all take a stand to end violence against women and girls. No woman should go through this alone.

Today, I am a proud advocate of women’s safety, a volunteer with UN Women’s “SANAP WANTAIM" Campaign, which has provided me with a platform to talk to other girls and women and raise awareness among communities.”

Related News
02/12/2016
“There isn’t one single stakeholder that can deal with this alone”—Executive Director Phumzile Mlambo-Ngcuka
14/04/2015
Women vendors improve markets in Papua New Guinea
11/04/2014
Making markets safe for women vendors in Papua New Guinea
10/09/2013
Half of men report using violence and a quarter perpetrate rape according to UN survey of 10,000 men in Asia-Pacific
12/03/2013
Study reveals shocking new evidence of men’s use of violence against women and girls in Asia Pacific
END_OF_DOCUMENT_TOKEN_TO_BE_REPLACED