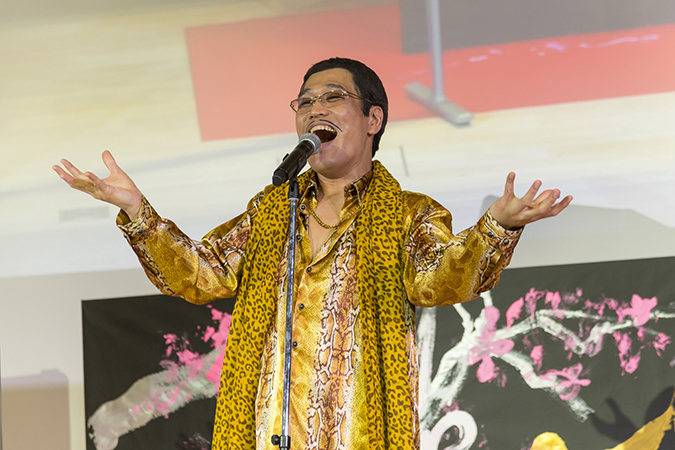 Japanese pop sensation PIKOTARO debuted his new song, “Gender Equal Peaceful World”, at a dynamic event in Tokyo on 1 March, organized by UN Women and Japan’s Ministry of Foreign Affairs. His song, I have a man, I have a woman…Gender Equal Peaceful World! with signature dance moves captured the hearts of people from all walks of life who gathered at the event, titled, “Transforming Gender Social Norms through Comedy: Fighting Terrorism One Laugh at a Time”, at the prestigious Sophia University. The event showcased the promising results of UN Women’s regional programme on preventing violent extremism, “Empowered Women, Peaceful Communities”, supported by the Government of Japan. 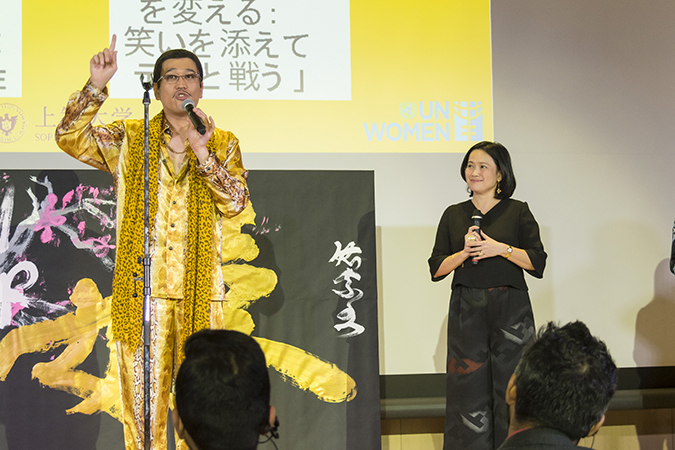 The programme, which has been successfully implemented in Bangladesh and Indonesia since April 2017, has already empowered 1,638 women in Indonesia and 1,200 in Bangladesh through small business loans, entrepreneurial and leadership training. The participants have become key actors in building resilience against extremist ideologies within their communities. Read more about the programme here.

Through social media and online platforms, PIKOTARO’s new song reached over 2.2 million people within the first five days of its release. UN Women Asia and the Pacific Regional Director Miwa Kato and team worked with PIKOTARO to develop the lyrics of the song, connecting the concepts of “gender equality” to “peaceful world”, highlighting the links between Sustainable Development Goal 5 on gender equality, and Goal 16 on peace and justice, as part of this unique partnership. The video has gone viral and attracted media attention across Asia. 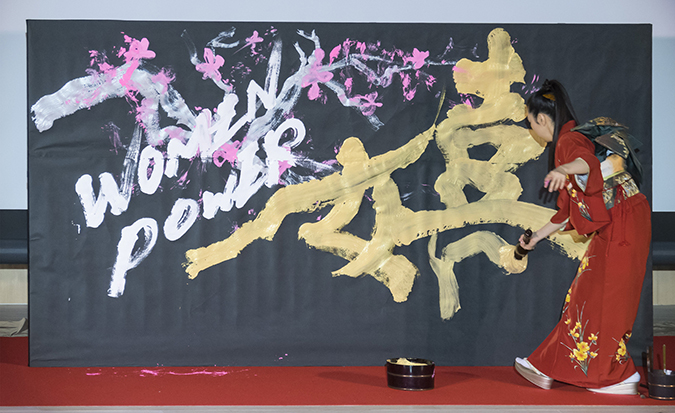 The event featured many other prominent artists, including Carigrapher Yuuna Okanishi and Takashi Matsunaga on the piano.

The performances and videos emphasized the value of alternative messaging to counter the narratives of violent extremist groups that exploit gender stereotypes in recruiting young men and women. Within 24 hours of its launch, “Brainwash” had received over 200,000 views, demonstrating the power of social media to engage new and young audiences. 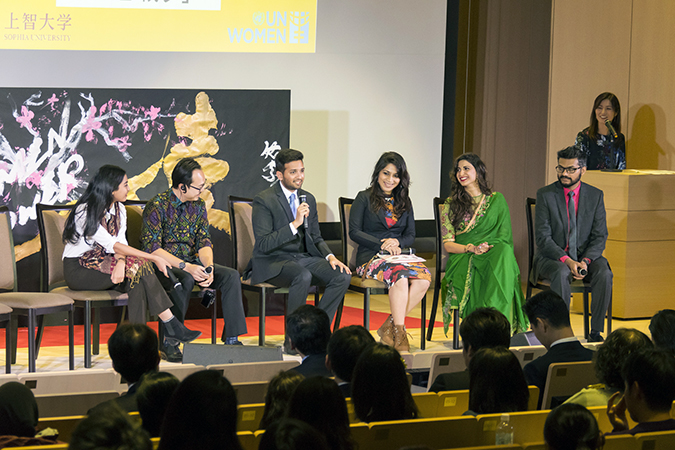 Performers from the evening event share the stage for a panel discussion on the use of the arts to spread messages of peace and change gender social norms. Photo: UN Women/STORY CO., LTD

Speaking at the event, Mitsunari Okamoto, Parliamentary Vice-Minister, Ministry of Foreign Affairs, Japan, said, “Through community engagement at the grassroots level, we will challenge intolerance by fostering dialogue and the power to oppose terrorist messaging.”

The event also marked the conclusion of the regional conference, “Women and their Role in Creating Peaceful Societies and in Preventing Violent Extremism”, which brought together grassroots practitioners and representatives from the government, academia, media and the private sector across Indonesia, Bangladesh and the Philippines, to share their perspectives.

The conference launched three unique research studies commissioned under UN Women’s regional programme, including the first-ever sex-disaggregated national survey in Indonesia on the threat of violent extremism among Muslim men and women, conducted with the Wahid Foundation.

Related News
28/06/2021
Winners of the comic and cartoon competition, “Generation Equality: Picture It!”
03/09/2020
Interview with Motegi Toshimitsu, Japanese Minister for Foreign Affairs
14/01/2019
A fresh look and a fresh start for survivors of human trafficking in Cambodia
08/01/2019
From where I stand: “They forced me to get pregnant”
03/01/2019
Tackling human trafficking in Myanmar
END_OF_DOCUMENT_TOKEN_TO_BE_REPLACED