New York, 7 March—Coming on the heels of unprecedented global efforts for women’s rights, equality and justice, International Women’s Day, 8 March, will put a spotlight on the tireless work of activists who have been central to these extraordinary movements worldwide. Under this year’s theme, “Time is Now: Rural and Urban Activists Transforming Women’s Lives”, events around the world will capture the vibrant work of activists and their mobilization for change.

Through marches of solidarity, viral social media campaigns, cultural efforts and powerful grassroots organizing, people across the world are galvanizing for a future that is gender equal. While some of these movements have captured the headlines, other efforts persevere far away from the limelight. Rural and urban activists continue to mobilize, disrupt the status quo, and influence a broad range of policy, legislative and social reforms, from founding projects to end violence at the workplace to providing access to services for ethnic, immigrant and minority women, working every day to leave no one behind.

UN Women Executive Director, Phumzile Mlambo-Ngcuka, said: “We know that healthy societies include a wide mix of voices, yet millions of women around the world are being silenced and their potential cramped. The current solidarity movements have to be a tipping point for accountability; an end to impunity and the cyclical poverty of women in both rural and urban areas. Lively political activism from both men and women must target change for those who need it most”.

Today, gender inequality is rife: 1 in 3 women experience violence in their lifetime; 830 women die every day from preventable pregnancy-related causes; and only 1 in 4 parliamentarians worldwide are women. It will be 2086 before we close the gender pay gap if present trends continue with no action.

"It's about how we make sure those girls and women, their potential is not left on the floor." - @DanaiGurira, Tony-Nominated Playwright, Actor & Activist #IWD2018 pic.twitter.com/uXYO5sncey 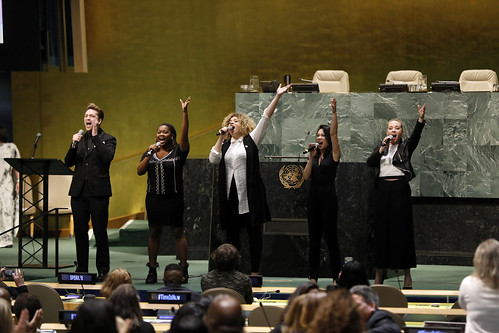 The event will amplify the voices of rural and urban women and activists, and identify ways in which the UN system and partners can support accelerated action towards gender equality and women’s empowerment in both rural and urban settings.

International Women’s Day is an opportunity to stand in solidarity with all those fearless women standing up for gender equality, and spotlight those who often pass unnoticed. Today’s activists are empowering those  most likely to be left behind, the majority of whom are women, as UN Women’s latest report, Turning Promises into Action, reveals:

Women activists show their support for the #TimesUp and #MeToo movement at the commemoration of International Women's Day. Photo: UN Women/Ryan Brown

Rural women and their organizations represent an enormous potential, making up over a quarter of the world population. The theme of the upcoming 62nd session of the Commission on the Status of Women will focus on the challenges and opportunities they face. Rural women till the lands and plant seeds ensuring food security for their communities. As primary energy managers in households, they can lead the way in transitioning to sustainable energy and build climate resilience.

Yet, on almost every measure of development, rural women fare worse than rural men or urban women. They are disproportionately affected by poverty and unequal access to land and natural resources, infrastructure and services, and decent work and social protection.

As a pre-requisite to ensure rural women rights, harmful practices against women and girls, such as Female Genital Mutilation (FGM) and child marriage, need to end. The Spotlight initiative, launched in 2017 with an initial investment of EUR 500 million by the European Union, is one of the forward-looking global solutions to eradicate all forms of violence against women and girls, including in rural areas.

To highlight the need of strengthening female entrepreneurship and to create sustainable businesses, another event hosted by UN Women in New York will take place on 8 March in partnership with Innovation Norway and with the presence of the Crown Princess Mette-Marit of Norway. During this event, UN Women will announce the Champions for Innovation (GICC)—a diverse group of women and men, from actors to athletes, who will support UN Women in ensuring that women and girls can design, shape and benefit from the technological transformations and innovations changing our world. Successful female entrepreneurs will also be celebrated during the event.

"We're not going to stop, we are going to stand up for the women next to us" - @RWitherspoon Academy-Award Winning Actor & Activist. #IWD2018 #TimeIsNow pic.twitter.com/y0WpoZYXzk

Around the world, over 60 stock exchanges will host bell ringing ceremonies to raise awareness of the pivotal role the private sector can play in advancing gender equality. Marking International Women’s Day globally, other events that will garner attention to women’s rights include a running competition in Ethiopia, a bicycle marathon in Timor-Leste, and a ‘Battle of the Bands’ competition in the Philippines to raise awareness on the importance of creating safe and violence-free public spaces for women and girls.

Happy Int'l Women's Day! Thank you to everyone who joined us in saying #TimeIsNow & celebrating women & activists everywhere. #IWD2018 pic.twitter.com/STSlCbGxuP

In the Arab region, an innovative Virtual Reality (VR) campaign and social experience will take place, with a series of VR films that put men and boys in the shoes of women in the context of real situations related to fatherhood, violence and sexual harassment. In the former Yugoslav Republic of Macedonia, debates and documentary screenings about gender equality will take place in high schools, and a new report on women’s political participation will be launched in Guatemala. In Cox’s Bazar, Bangladesh, Rohingya women refugees at UN Women’s Multi-Purpose Women’s Centres will make kites and write their demands and wishes on them before flying them, to celebrate International Women’s Day, followed by a video screening and debates on economic resilience.

Download the Russian, Chinese and Arabic versions of this press release.