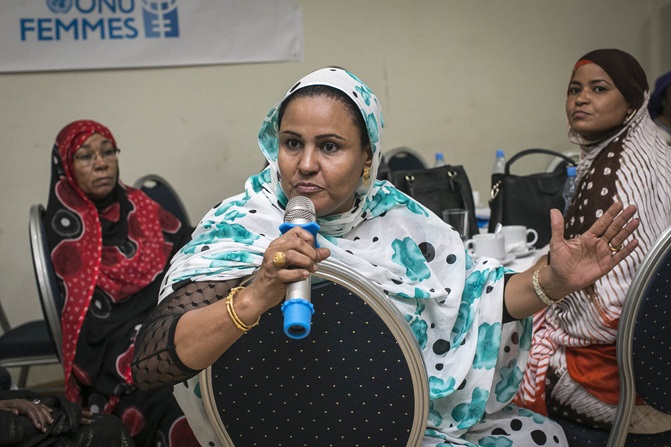 A participant sharing her views on the state of peace and security in Mali during the 3-days meeting Photo: UN Women

Three years since the signing of the peace agreement, Malian women are impatient to see its provisions at work.

“We have discussed enough, it is now time to act,” said one woman at a recently held meeting in Bamako, which convened 40 women leaders from civil society, government and armed groups to find common ground and accelerate efforts to increase Malian women’s participation in the peace process.

The multidimensional security and political crisis with interlinked micro-conflicts in Mali have had devastating consequences for its population and particularly for women and girls, who have been largely displaced and remain in insecure living and safety conditions. Only 10 to 20 per cent of women and girls who survived gender-based violence related to the conflict have access to protection and judicial assistance. Businesses with Malian art crafts, many of which have made a living for women in the north, have collapsed and jeopardized their livelihoods.

Since December 2015, Malian national law has stipulated a 30 per cent quota for women in all political functions and offices. However, in many important State institutions, meaningful representation of women remains a distant ideal; Mali’s highest committee overseeing the peace agreement is composed entirely of men.

During the three-day meeting organized by UN Women and the UN Peacekeeping Mission in Mali, women leaders developed specific recommendations to strengthen women’s participation in the implementation of the 2015 peace agreement.

“The peace agreement has not been implemented in large parts, and our wishes have not been considered,” explained an anonymous activist. This meeting allowed us, as women from civil society, authorities and armed groups, to unify and raise our voices. We must use the upcoming elections to increase our influence.”

Read the full story on UN Women's website for Africa