From Sudan to the Security Council: Sudanese women lead drive for change 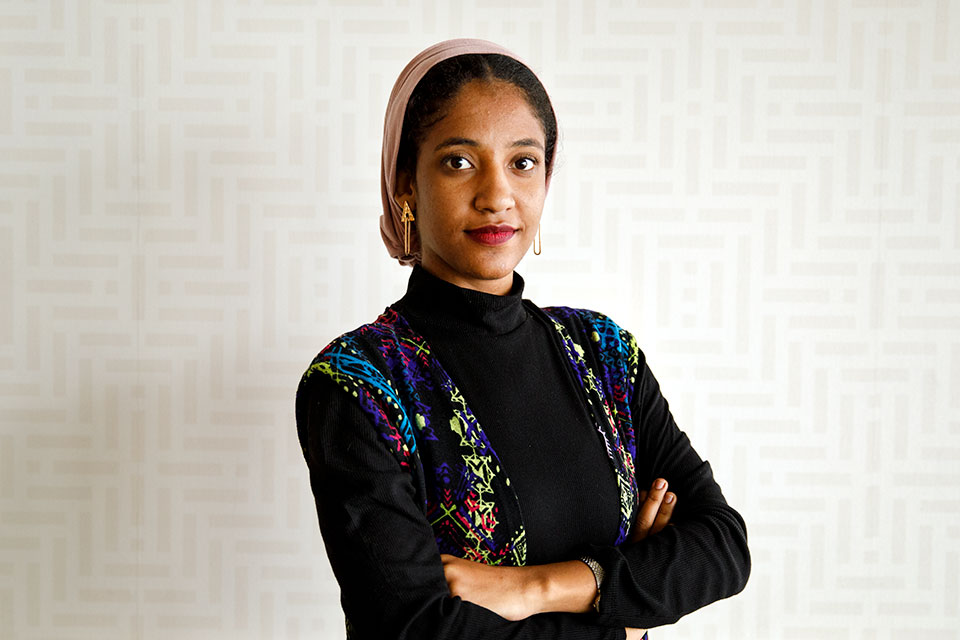 On 8 April 2019, Alaa Salah took to the streets in protest of the declining economic state of her country, just like thousands of other students and young people in Sudan. She had no idea that she would become the face of the Sudanese protest movement.

By 11 April, the President of Sudan had been arrested, and a photo of Salah, standing atop a car in all white and leading a crowd in a chant, had gone viral.

The iconic photograph highlighted women as a driving force of the movement.

“I was so surprised about that image,” Salah said to UN Women during her recent visit to New York, where she was speaking at the UN Security Council. “Ever since the start of the revolution, I’d been going on the streets and singing. I didn’t know that day would be any different.”

Since her photograph gained international attention, Salah has become even more involved in the movement.

She started meeting and learning from other women who had more political experience, to better understand the political process.

That summer, Salah received the invitation to speak on behalf of all Sudanese women at the annual UN Security Council Open Debate on Women, Peace and Security.

“My journey to you was forged by a long line of Sudanese women who have fought for peace and justice in our communities for decades, well before we arrived at this important moment in the future of Sudan,” she told the UN Security Council last week.

Three of those women, Safaa Ayoub, Huda Ali and Samah Jamous travelled with Salah to New York and also participated in a Civil Society Forum, co-organized by UN Women, the NGO Working Group on Women, Peace and Security, and the Government of Sweden. 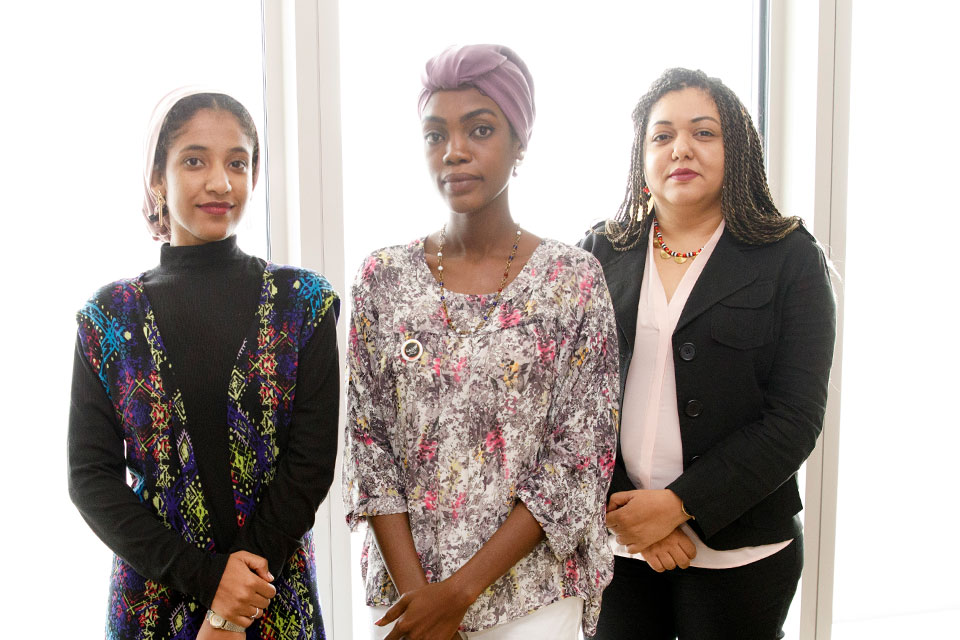 Jamous, an activist by day, dentist by night, works to raise awareness about the rights of young women in conflict areas. Recently, Jamous co-founded the ‘Women for Peace Initiative’, a youth-led movement that creates safe spaces for young community leaders to participate in different levels of decision-making processes.

“I cannot express how I feel about this opportunity,” said Samah, about her experience of attending the UN Security Council Open Debate. “It's one of the [signs] that things are changing in Sudan. This means hope for me and so many thousands of women and young women in Sudan.” 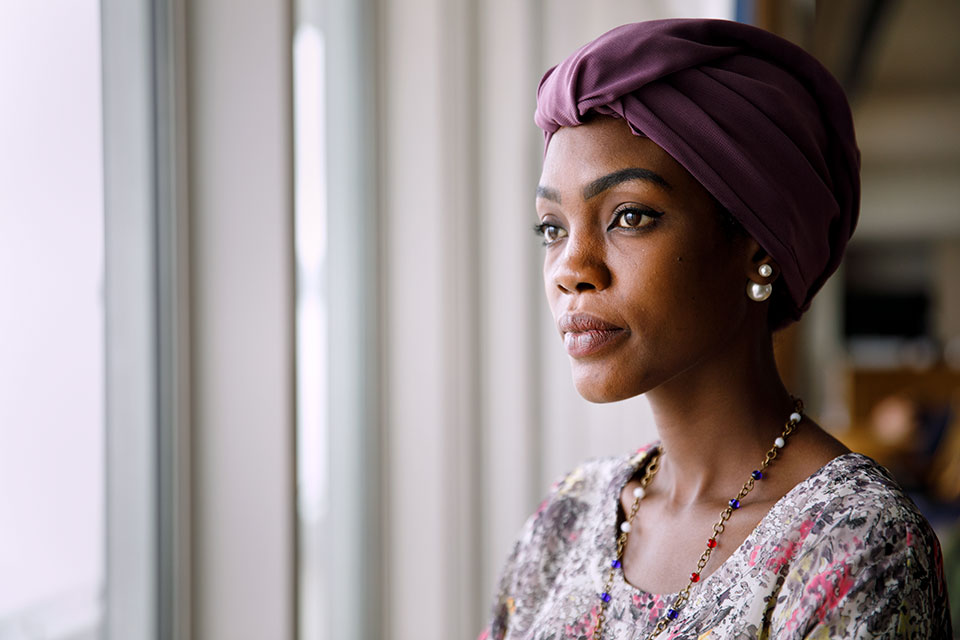 She added that women, especially young women, have been the driving force of revolution in Sudan.

“Young women's voices are so important, not only because most of the population of Sudan is young, but also because young women have been subjected to so many things,” she said.

During her remarks to the Security Council, Alaa Salah also highlighted this, explaining that women and youth often outnumbered men and accounted for 70 per cent of protestors.

“The strength of the revolution came from the representation of diverse voices from across the country—this inclusion is now integral to the legitimacy of the transition process,” she told the Security Council. “Unless the political process reflects and embraces the diversity of our society, women groups, civil society, resistance groups, ethnic and religious minorities, those who have been displaced, and people with disabilities—no agreement will reflect our collective aspirations.” 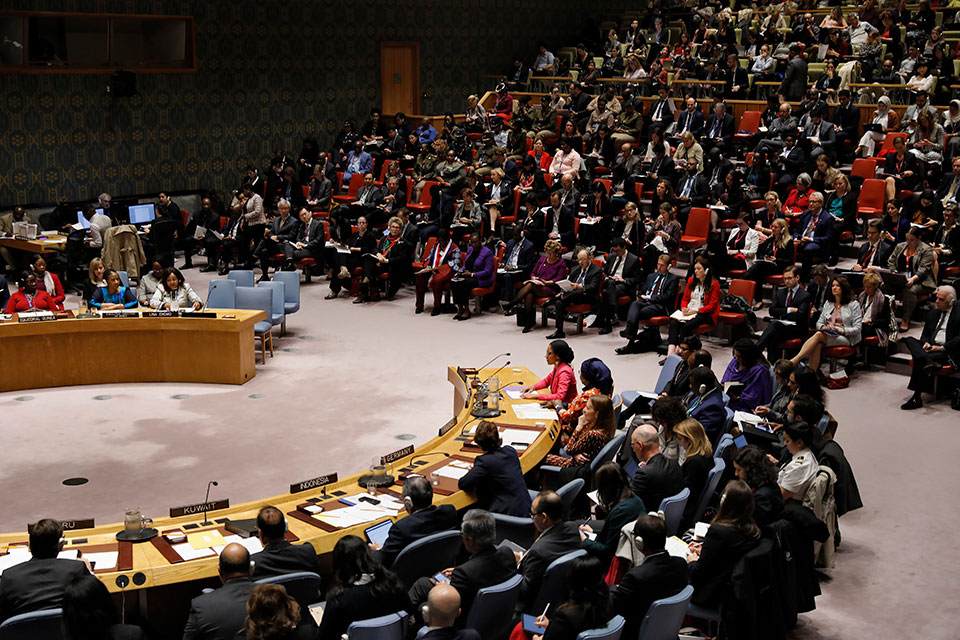 The annual Security Council Open Debate on Women, Peace and Security is one of the largest gatherings of Member States at the UN every year. The Debate gives the international community a chance to take stock of the progress on women’s leadership and participation in peacebuilding, as well as their needs and concerns, and for Member States to make public commitments.

Brave women who stand up for peace & justice are unstoppable.

Activist & community leader, @lwolia_salah made an important call to action at the @UN Security Council Open Debate for #UNSCR1325 📣 pic.twitter.com/ZHPLM2QI9t

Since 2000, the annual Open Debate has expanded into a week of activities and events, informally dubbed Women, Peace and Security Week. It provides the opportunity for activists like Salah to appeal directly to Member States and the UN Security Council.

“Until recently, 80 percent of the people that addressed the Security Council were men,” says Paivi Kannisto, Chief of Peace and Security section at UN Women. “This number is only now starting to change. This year so far, almost thirty women representing civil society have already spoken at the Security Council. This is a record and shows that the Security Council is paying more attention to women’s priorities and perspectives when discussing international peace and security, which is critical to sustaining peace.”

However, the challenges that women face, specifically young women, in accessing such international fora are monumental. Getting the requisite travel authorization and financial resources hold women back.

“Our entire delegation faced this problem [with the visa],” said Salah. “There's this mentality in that when young people apply for a visa [the authorities] are very skeptical about us leaving and not coming back.”

This year during the Women, Peace and Security Week, the women from Sudan called for actions to ensure Sudanese women’s meaningful participation in the transition process, protection of their rights, and disarmament within the country.

“We don't want an artificial peace process,” said Huda Ali, member of the women’s rights coalition MANSAM—an alliance of 176 members with representation from eight different political parties and 13 civil society bodies. “We want a real peace process, dealing with the issues of disarmament, and really to make sure there is 50 per cent women's participation across all levels and structures.”

Ali, who works with political parties, government representatives and women’s groups, emphasized that an inclusive peace process needs to take into account diverse perspectives: “We want to create a process that is really responding to the people’s aspirations about what peace means, because peace means different things to everyone.” 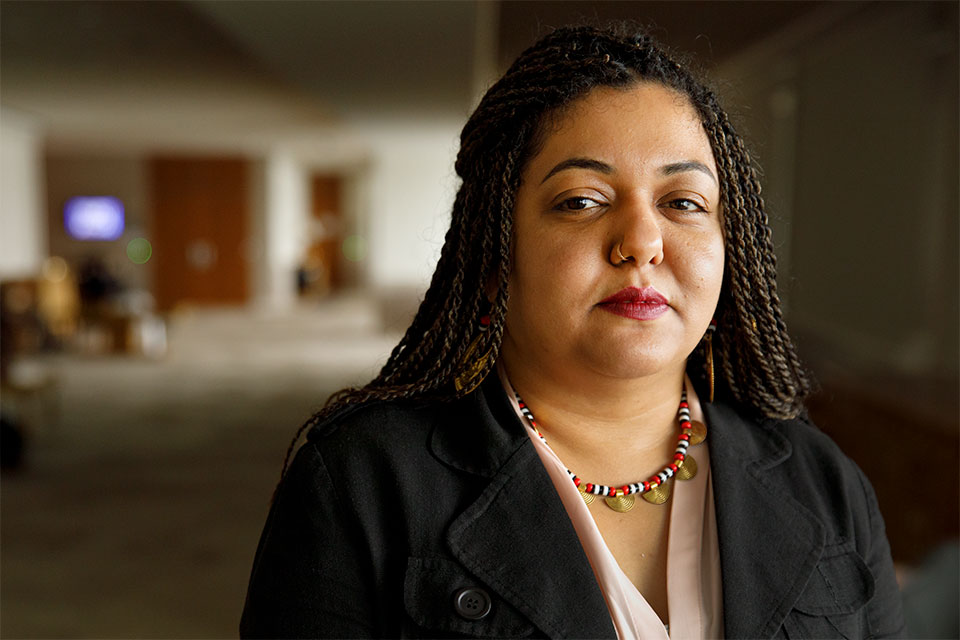 What do Sudanese women and youth want, we asked Salah.

“The demands of Sudanese youth and women can really be summarized in the slogan of the revolution: "Freedom, peace and justice",” she responded.

Related News
01/12/2015
In the words of Julienne Lusenge: “Women are the first victims of war” in the Democratic Republic of the Congo
14/05/2013
In the words of Saran Keïta Diakité: Girls receive a visit from a different man every night, a ‘new husband’
12/04/2013
Women peace advocates put forth key recommendations for Sahel region
10/03/2021
This is what leadership looks like: Meet Fanta Diamande, a local peace mediator in Côte d'Ivoire
29/10/2019
Statement by Alaa Salah at the UN Security Council Open Debate on Women, Peace and Security
END_OF_DOCUMENT_TOKEN_TO_BE_REPLACED