In the words of Chinyere Eyoh: “I could not become one more statistic” 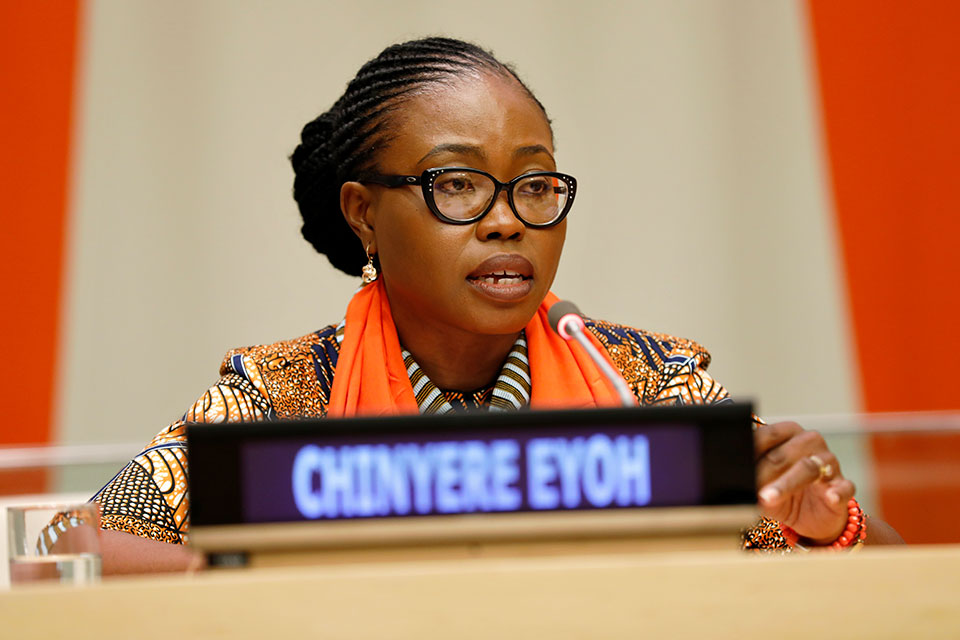 Chinyere Eyoh is the Executive Director of Sexual Offences Awareness and Victims Rehabilitation Initiative (SOAR), Nigeria, which received a grant from the UN Trust Fund to End Violence against Women. She spoke to UN Women about what motivated her to start the organization.

When I got the marriage proposal, I said: “You don’t know what I’ve been through." I told him everything.

I was first abused when I was four, by my uncle. I didn’t understand what had happened. I remember the only thing I could tell my mother was that my “bumbum” [bottom] was hurting. She couldn’t imagine such a thing happening, so she just told me that I would feel better soon.

Two years later, another uncle came to live with us, and for about eight years I was sexually abused. It started gradually, there was a grooming process. He would manipulate me and say things like, “I am your favorite uncle, I love you”, “this is what uncles do with their little girls”. By the time the actual assault started, I had accepted it as normal. I was devastated, but I did not talk about it. I was afraid of the stigma, of the shame. I did not think I had a choice.

At one point, I had to stop all of that. I knew it was not right. I could not become one more statistic of a woman who gave up because of this.

I started university and I was sexually assaulted again, twice in two months, by two different men. The second time, I wasn’t even alone, I was walking back to campus with some girlfriends, who ran away scared [when I was attacked].

I started doing some research and realized that there were far more girls out there who had been sexually abused, but no one was talking about it. I wanted to get help for myself and for others. I decided to share my story.

When my husband proposed to me, I thought he would not be okay with me speaking out about my abuse, but I didn’t want anyone to [silence] me. To my surprise, he supported me.

First, I wrote a book, and then I created a non-profit organization to help protect young girls, help survivors heal from the abuse, and to help parents develop strategies to support children who experience abuse. We established safe spaces in schools and trained girls as peer educators to share information on preventing violence, on sexual education and life skills.

Thanks to the UN Trust Fund to End Violence against Women grant, we were able to expand our work beyond schools. We started working with traditional and community leaders, who are the custodians of the norms and traditions, to establish community-based child protection committees. We trained these well-respected leaders to understand sexual violence as a crime and not a family matter. The project also identified and trained “aunties” in the communities that act as female mentors, to whom adolescent girls can confide and discuss issues that are otherwise considered taboo.

The project has just ended, but these committees and “aunties” are an ever-lasting resource for girls in these communities. And, because of the evidence we have got from this project, we have been able to apply for other grants, and are about to open a support centre for children, provide a hot line and online counselling, as well as walk-in services, and monthly support groups.”

Related News
07/09/2016
From where I stand: Hajiya Halima Mahdi
22/04/2015
In the words of Edith Chukwu: I want to see a world free of violence against women and girls
14/04/2015
Statement of the Executive Director of UN Women on the one-year anniversary of the Chibok kidnappings
06/12/2021
From victims to leaders: Ending gender-based violence in the Lake Chad Basin
26/11/2021
Working with traditional leaders to end violence against women in West Africa
END_OF_DOCUMENT_TOKEN_TO_BE_REPLACED