“Progress of the World’s Women 2019-2020: Families in a Changing World” examines how the transformations in families impact women’s rights, and reveals most countries can afford family-friendly policies 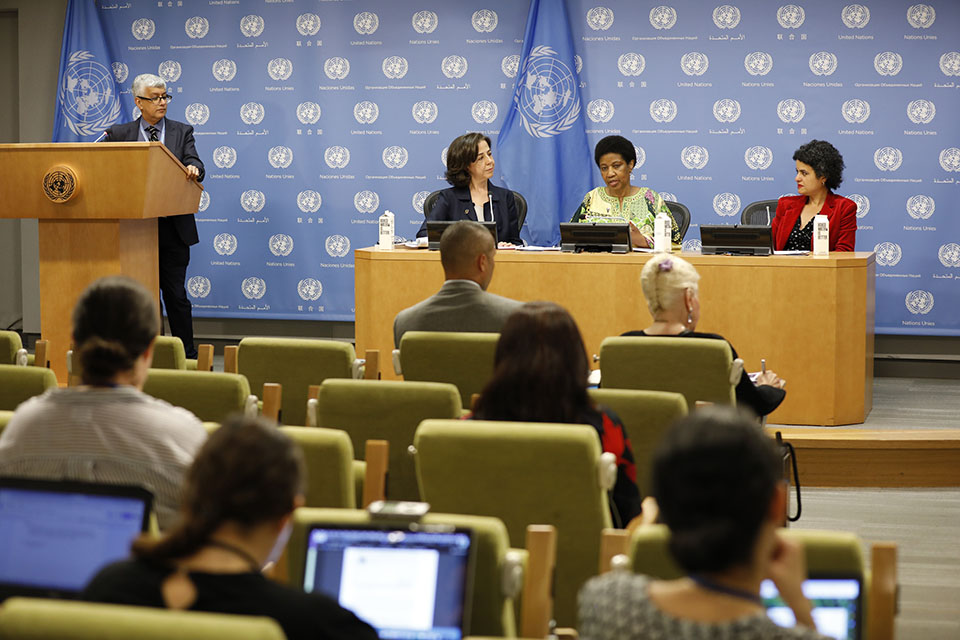 Shahra Razavi, Chief of Research and Data at UN Women; Phumzile Mlambo-Ngcuka, Executive Director of UN Women; and Marwa Sharafeldin, Activist and Board Member, Musawah, International Movement for Equality and Justice in the Muslim Family, at the launch of UN Women's flagship report, Progress of the World’s Women 2019-2020: Families in a Changing World. Photo: UN Women/Ryan Brown

New York, 25 June 2019 –As women’s rights have advanced over the past decades, families around the world have become a place of love and solidarity but also one where fundamental human rights violations and gender inequalities persist, according to UN Women’s new flagship report, “Progress of the World’s Women 2019-2020: Families in a Changing World,” published today.

“Around the world, we are witnessing concerted efforts to deny women’s agency and their right to make their own decisions in the name of protecting ‘family values’. Yet, we know through research and evidence that there is no ‘standard’ form of family, nor has there ever been,” said UN Women Executive Director, Phumzile Mlambo-Ngcuka. “This report counters that pushback by showing that families, in all their diversity, can be critical drivers of gender equality, provided decision-makers deliver policies rooted in the reality of how people live today, with women’s rights at their core.”

Anchored in global data, innovative analysis and case studies, the report shows the diversity of families around the world and provides robust recommendations to ensure that laws and policies support today’s families and meet the needs of all their members, especially women and girls, with analysis of what it would cost to implement them.

Among the trends observed:

As the report shows, families can be places of care, but can also bring conflict, inequality and, far too often, violence. Today, three billion women and girls live in countries where rape within marriage is not explicitly criminalized. But injustice and violations take other forms as well. In one out of five countries girls do not have the same inheritance rights as boys, while in others (a total of 19 countries) women are required by law to obey their husbands. Around one third of married women in developing countries report having little or no say over their own healthcare.

Women continue to enter the labour market in large numbers, but marriage and motherhood reduce their labour force participation rates, and the income and benefits that come with it. Globally, just over half of married women aged 25-54 are in the labour force, compared to two-thirds of single women, and 96 per cent of married men, new data in the report shows. A major driver of these inequalities is the fact that women continue to do three times as much unpaid care and domestic work as men in the absence of affordable care services.

The report sheds some positive light on parental leave, with an increase of its intake by fathers, particularly in countries where specific incentives, such as ‘daddy quotas’, are in place that reserve a non-transferable portion of the leave for them on a ‘use it or lose it’ basis.

It also puts a spotlight on the challenges that women and their families face when they migrate. Unjust regulations mean that not all families have the right to family reunification and they are often excluded from access to public services. When women’s migration status is tied to their partners, it can be difficult or impossible for them to escape violent relationships.

The report calls on policymakers, activists and people in all walks of life to transform families into places of equality and justice—where women can exercise choice and voice, and where they have physical safety and economic security.

Some of the recommendations put forth by the report to achieve this include:

An analysis produced for this report found that most countries could implement a package of policies, including income support throughout the life course, healthcare, and care services for children and older persons for less than 5 per cent of GDP.

Ensuring that families serve as a home for equality and justice is not only a moral imperative, but essential for the achievement of the Sustainable Development Goals (SDGs), the world’s most comprehensive agenda to ensure human progress.

The main global facts and figures from the report can be found here.

The Progress of the World’s Women report series, a periodic thematic investigation of women's rights since 2000, seeks to spur change in laws, policies and programmes, creating an enabling environment for women and girls to realize their rights.

Progress of the World’s Women 2019-2020 coincides with UN Women’s “Generation Equality: Realizing women’s rights for an equal future” campaign—in the lead up to the 25th anniversary commemoration of the Beijing Declaration and Platform for Action of 1995, which is considered to be one of the most visionary agendas for the empowerment of women and girls, everywhere. Despite some progress, many challenges remain for women’s rights.