From where I stand: “A woman can and should be able to work”

Deep within the rural community of Karak lies the town of Taibeh, where 39-year-old Mona Ahmed Alqkla, found a safe place for her family seven years ago after fleeing the conflict in Dara'a, Syria. She had never had the opportunity to work, until now. She recently joined the incentive-based volunteer programme as a tailor in the Oasis Centre in Taibeh, which was launched by the Ministry of Social Development in partnership with UN Women in March 2019. 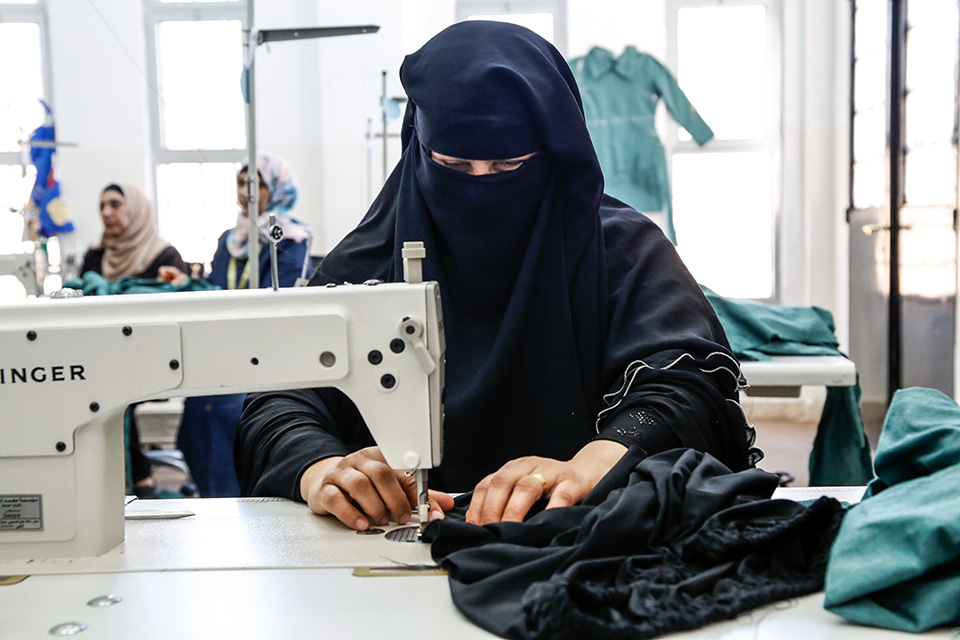 I left Dara’a seven years ago after fleeing with my family. We had to leave before the war tore our family apart. War is hard to imagine unless you have lived through it. It is frightening and I would never wish it on anyone.

At first, we lived in the Za'atari refugee camp for five months, but the conditions proved to be too harsh for my family. We made the decision to keep on travelling until we found a place in Karak.

I have always wanted to find work, but it was difficult. It is hard to find a job that can accommodate the needs of a woman and her family. My eldest daughter needs care because of her mental health, which meant I could never take up a job that was far away.

This year I took the decision to enroll in the Women's Centre [Oasis] as a tailor. When I was accepted in the programme, I was very nervous, but also excited.

Through the Oasis programme and the services that it provides, I now have access to childcare facilities, a transportation subsidy and I am able to earn an income for my family. What is most important to me is that I am now able to afford to pay for my daughter’s therapy.

Many Syrian refugee women in my local neighbourhood think women should not work; however, after having this opportunity I want to show them that a woman can and should be able to work and provide for her family.

In the three months that I have been here, I have learned so much! My dream is to open up my own tailoring business one day. And, now that I have the skills to do so, I have bought a sewing machine for my home and I am even teaching my husband how to sew. Perhaps one day we will have a family-owned shop.”

Mona Ahmed Alqkla is a Syrian refugee living in Taibeh, Jordan, where the Ministry of Social Development in partnership with UN Women has launched an Oasis Centre that provides economic empowerment training and services for Syrian and Jordanian women and girls, while also engaging men and boys to improve gender dynamics. The programme has received generous funding from the Government of Australia.

Related News
28/04/2020
Using technology to assist vulnerable Syrian refugees during COVID-19 lockdown
10/08/2018
Empowerment through employment for Syrian refugee women in Jordan
18/06/2018
From where I stand: “Always rely on yourself”
24/05/2022
Speech: Women’s land rights are intrinsically and vitally linked to gender equality
27/04/2022
Levelling the gender playing field in Jordan
END_OF_DOCUMENT_TOKEN_TO_BE_REPLACED