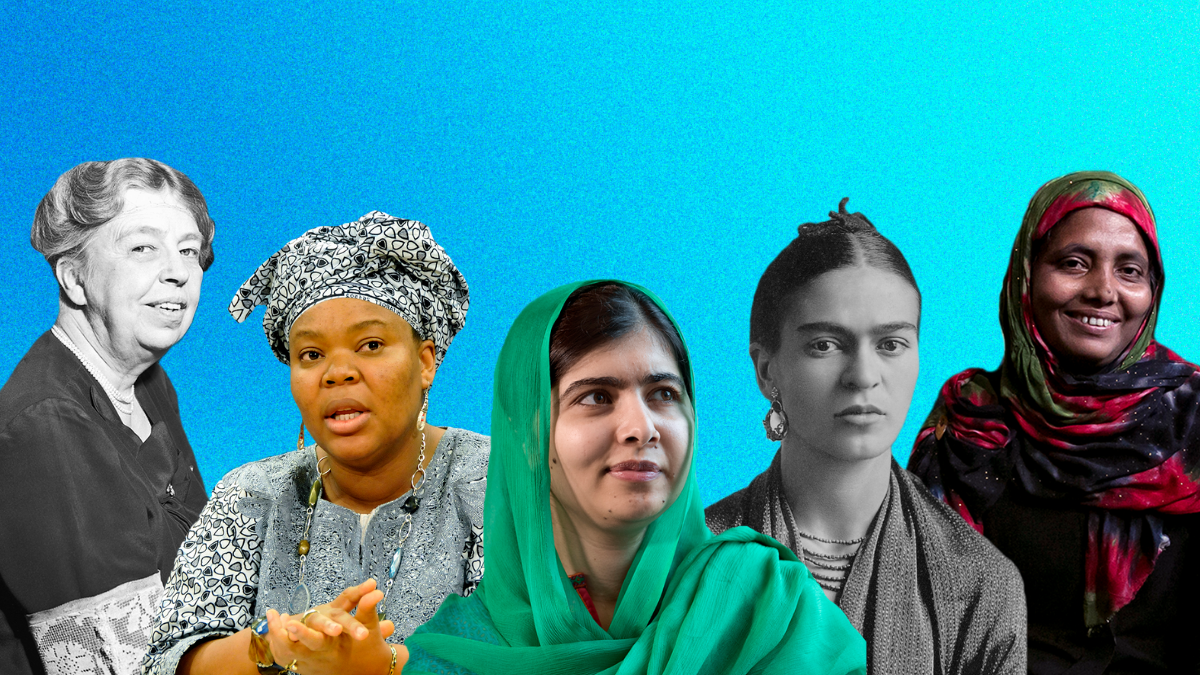 The new coronavirus pandemic has changed everything. With more than a billion people in lockdown, it has upended life as we knew. We don’t know what a better future would look like and when it’ll come.

During these uncertain and difficult times, we turn to women leaders from around the world for inspiration. They have forged peace when ravaged by war; they have driven innovation despite all odds; and they persisted in the face of challenges and insisted on building a better future.

To help keep us all going, we’re sharing some of our favourite inspirational quotes about perseverance and resilience. 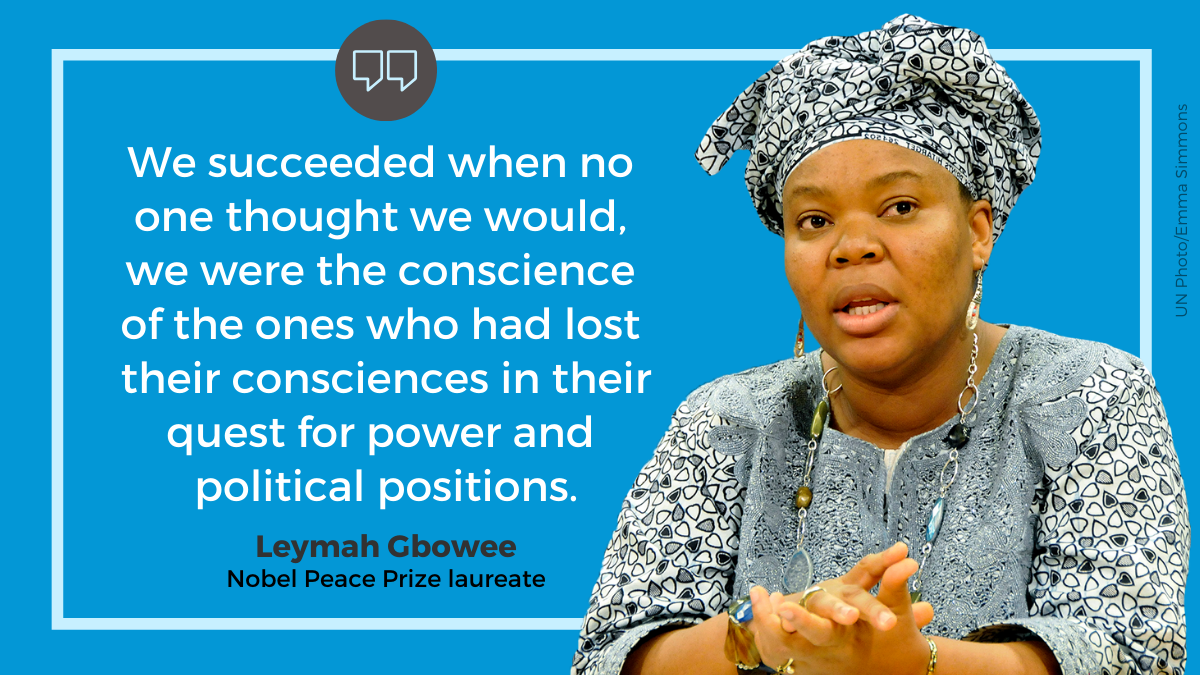 When the Liberian civil war started, Gbowee was just 17 years old. In the course of the conflict that raged violence all over the country for the next 14 years, she became a social worker and trauma counselor, working with former child soldiers. Amidst the relentless civil war, she never lost hope for a peaceful future and believed in the power of women’s solidarity to broker lasting peace and security. With her leadership, thousands of Liberian women formed a nonviolent movement that brought together Christian and Muslim women, and in 2003 played a pivotal role in ending Liberia’s civil war. 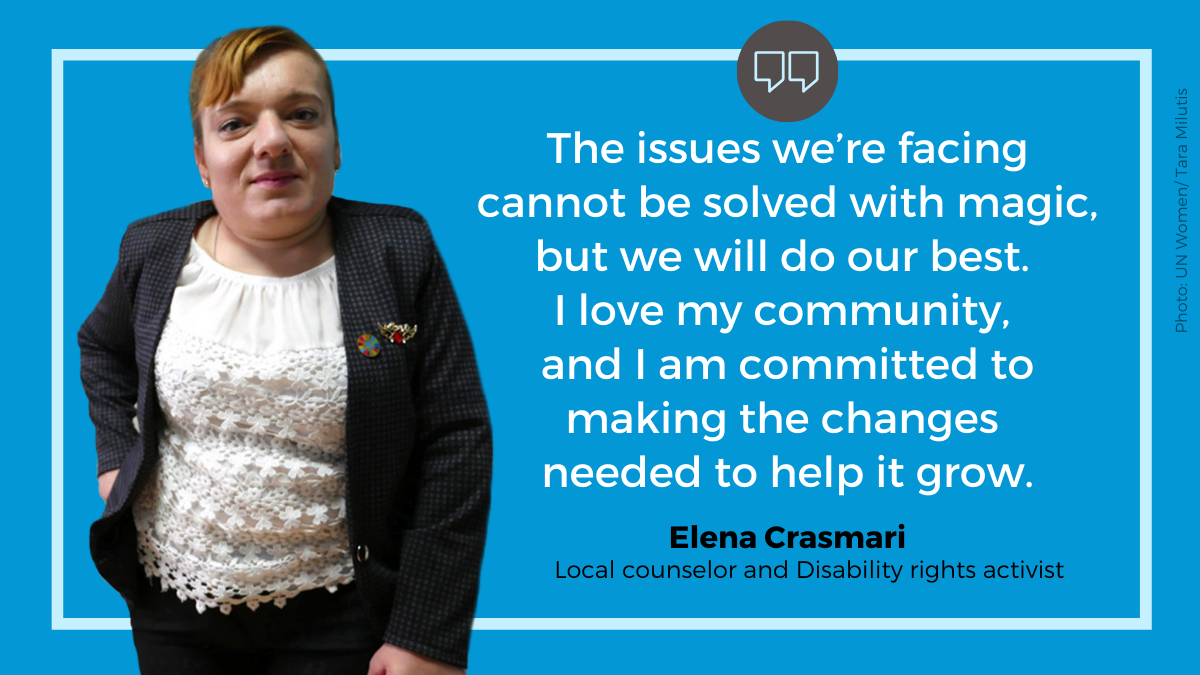 When Elena Crasmari, a woman with a disability, wanted to run for a local counselor seat in her home village in rural Moldova, the support from women in her community gave her inspiration and motivation. Elena found allies in women’s organizations and women mentors who helped her on her journey. “Sometimes it is enough to just take a woman by the hand and help her begin her journey,” she said.

Today, as a local counselor, Elena is working to ensure that all parts of her community are accessible to everyone. 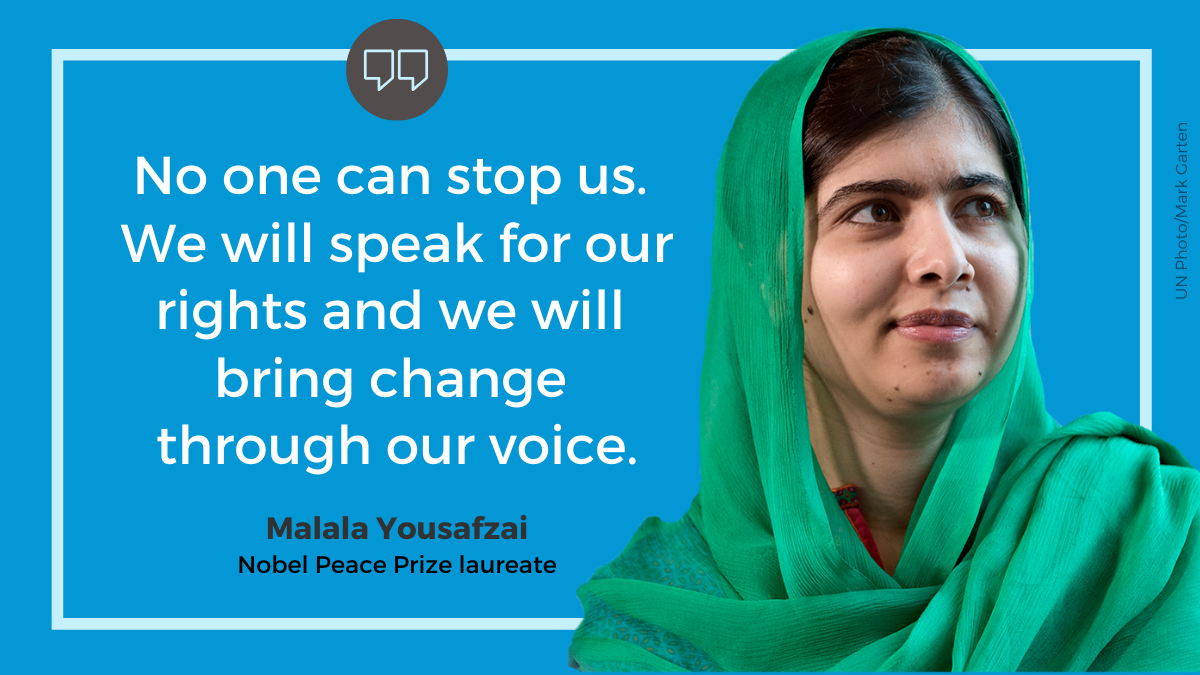 When Malala Yousafzai was 10 years old in Swat Valley, Pakistan, the Taliban took control over her city. Her community was forced to adjust to a new normal that meant living in a place where all cultural activities were prohibited, and girls were banned from going to school. But Malala didn’t give up.

Against all odds, she started speaking up for girls’ right to education. Because of her activism, she quickly became a target for the Taliban, and she was forced to flee her home. After weeks away, she returned home and continued to speak up even louder for girls’ right to go to school. Her campaign grew over the years until the morning of 9 October 2012, when 15-year-old Malala was shot by the Taliban on her way to school. After recovering from the gunshot wound to the head and neck, she picked up her activism. On her 16th birthday in 2013, she appealed to the world from the UN to come together and fight for every girl’s right to education. In 2014 she won the Nobel Peace Prize, becoming the youngest Nobel laureate ever. 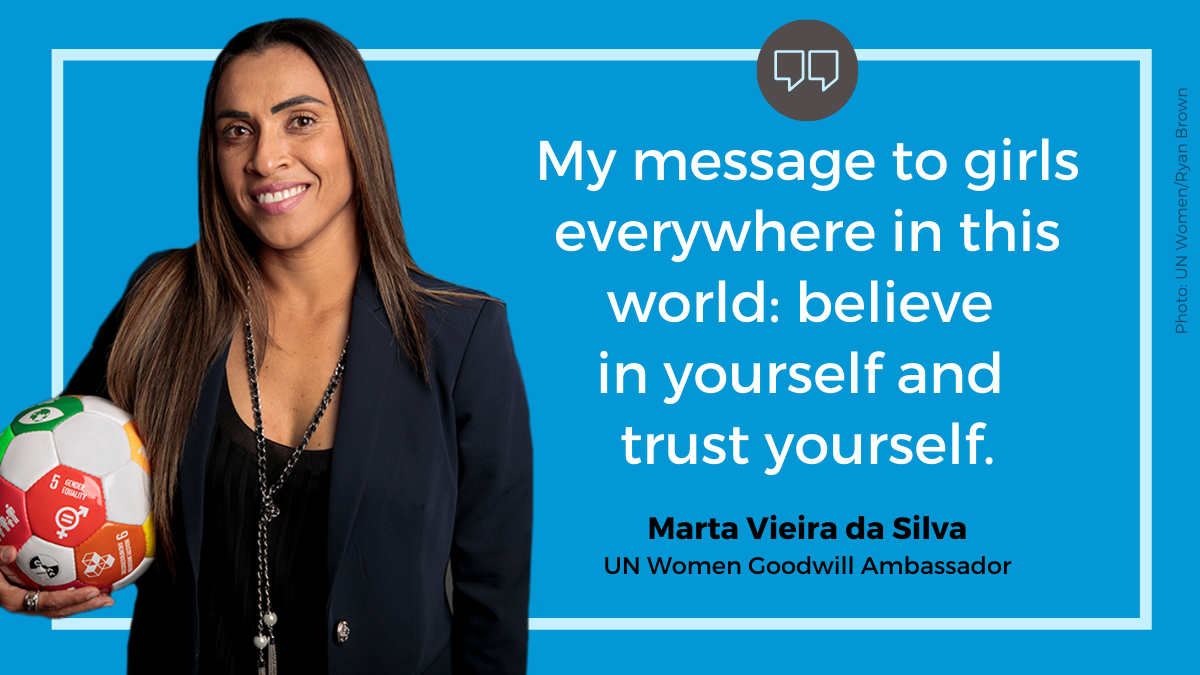 Global soccer superstar and UN Women Goodwill ambassador Marta Vieira da Silva started playing soccer when she was just seven years old. In her small town, she was the only girl who played, and was repeatedly told soccer was for boys and that she wasn’t good enough. Marta channeled her frustration onto the pitch, and now plays professional soccer on the global stage and has been named Best FIFA Women’s Player six times, and is an icon and role model for girls around the world.

Related story: She persists: Sport is a tool for empowering girls in Brazil 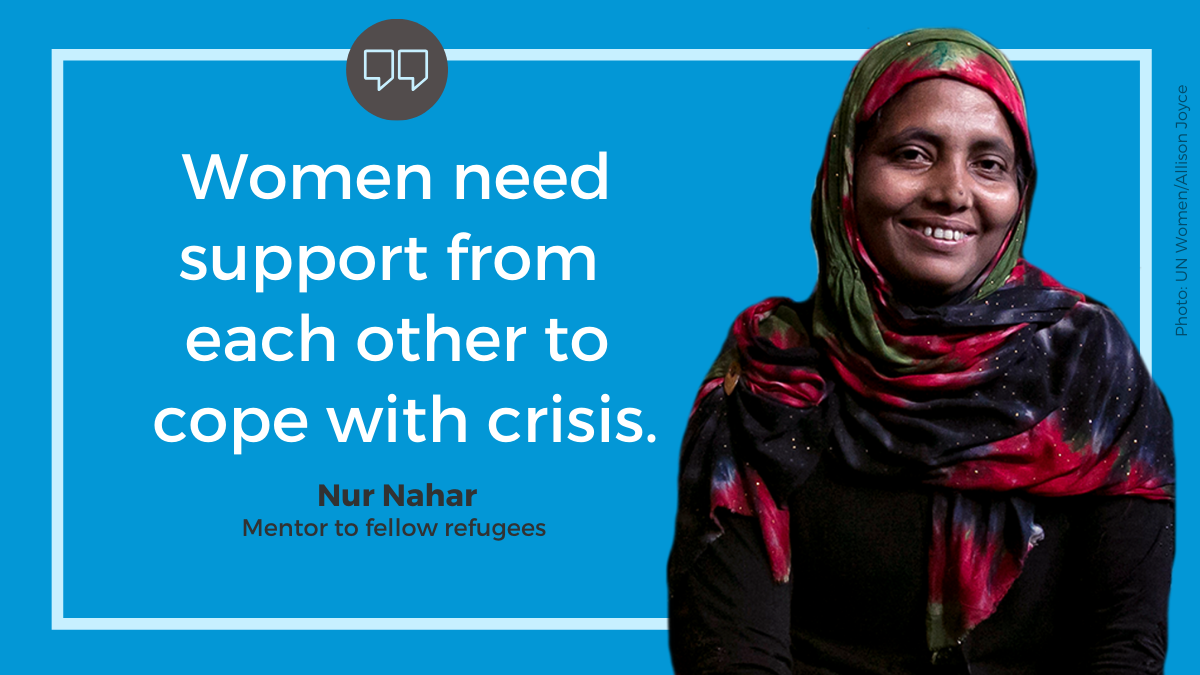 Bangladesh has been hosting Rohingya refugees from Myanmar for more than 30 years. According to UNHCR, as of 15 March 2020, there were 859,161 Rohingya refugees from Myanmar in Bangladesh — the majority of whom are women and girls. Nur Nahar is one of the Rohingya women who found the strength to cope with the crisis through women’s solidarity. She left Myanmar when she was only seven years old and grew up in the refugee camp at Balukhali, Cox’s Bazar. Now in her thirties, she is working as a mentor to newly arriving Rohingya women refugees as part of a UN Women-supported programme. 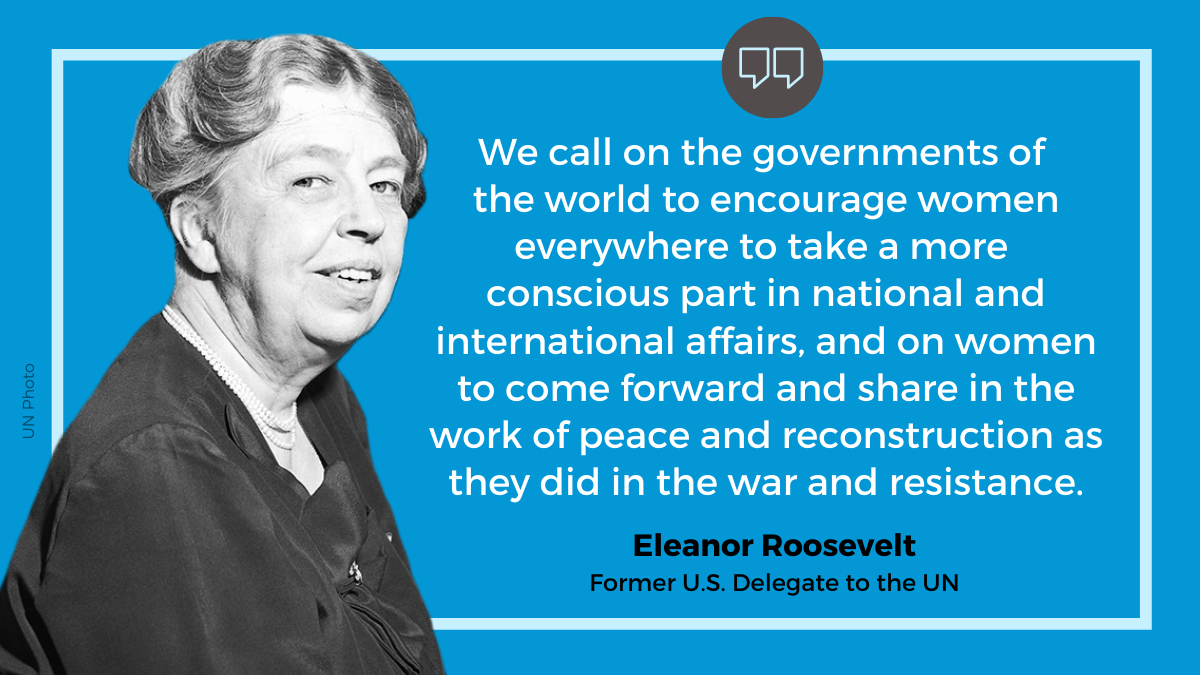 Following the devastation of World War II, the UN was formed in 1945 “to save succeeding generations from the scourge of war, which twice in our lifetime has brought untold sorrow to mankind”, as the Charter of the United Nations states.

In 1946, Eleanor Roosevelt was appointed as a delegate to the United Nations General Assembly and served as the first Chairperson of the Commission on Human Rights, playing an instrumental role in drafting the Universal Declaration of Human Rights. For the first time in human history, the landmark declaration spelled out basic rights and fundamental freedoms that all human beings — men and women alike — should enjoy. During the inaugural session of the UN General Assembly in 1946, Roosevelt read an “open letter to the women of the world”, urging the world to involve women in the international efforts to build a better, peaceful future for all. 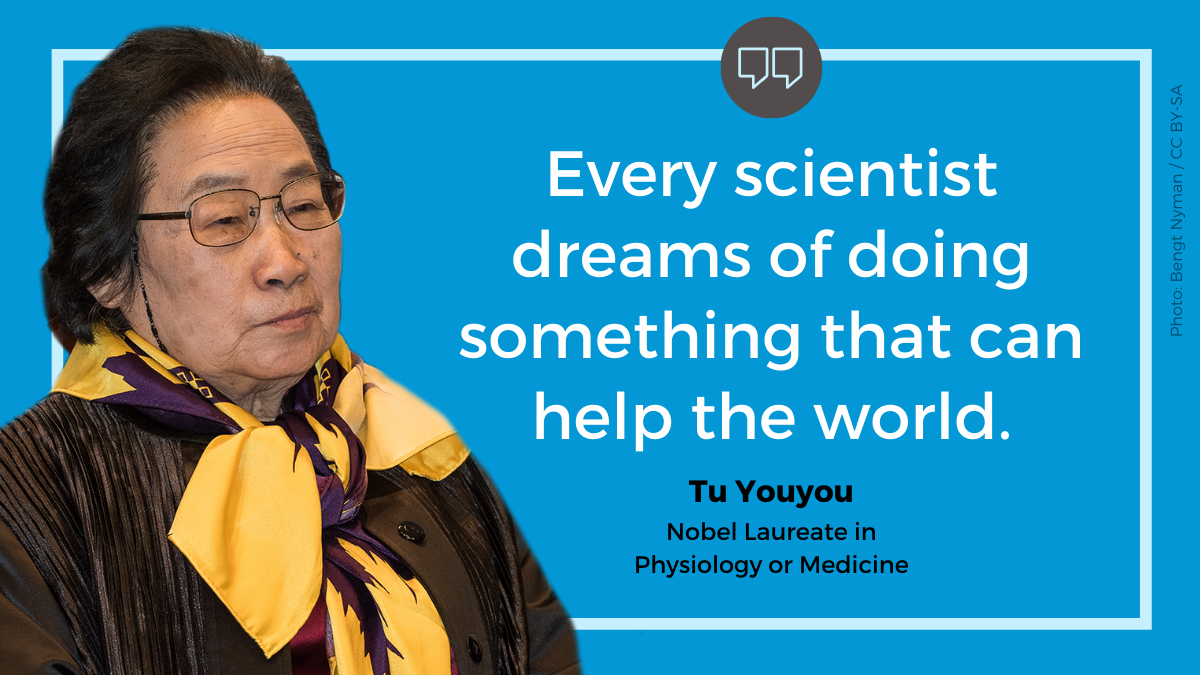 Despite the gender bias and underrepresentation of women in science, technology, engineering and math, women innovators and scientists have been pushing the boundaries of scientific knowledge and seeking solutions to complex global challenges every day. Especially now more than ever, the world needs science and science needs women whose contributions are vital in lifesaving research. One such creative mind is the pharmaceutical chemist, Tu Youyou who found a drug to treat malaria from traditional Chinese medicine. With her team, YouYou isolated the ingredient she believed would work and volunteered to be the first human subject. Her discovery of artemisinin, a compound that quickly reduces the number of plasmodium parasites in the blood of patients with malaria, has saved millions of lives. 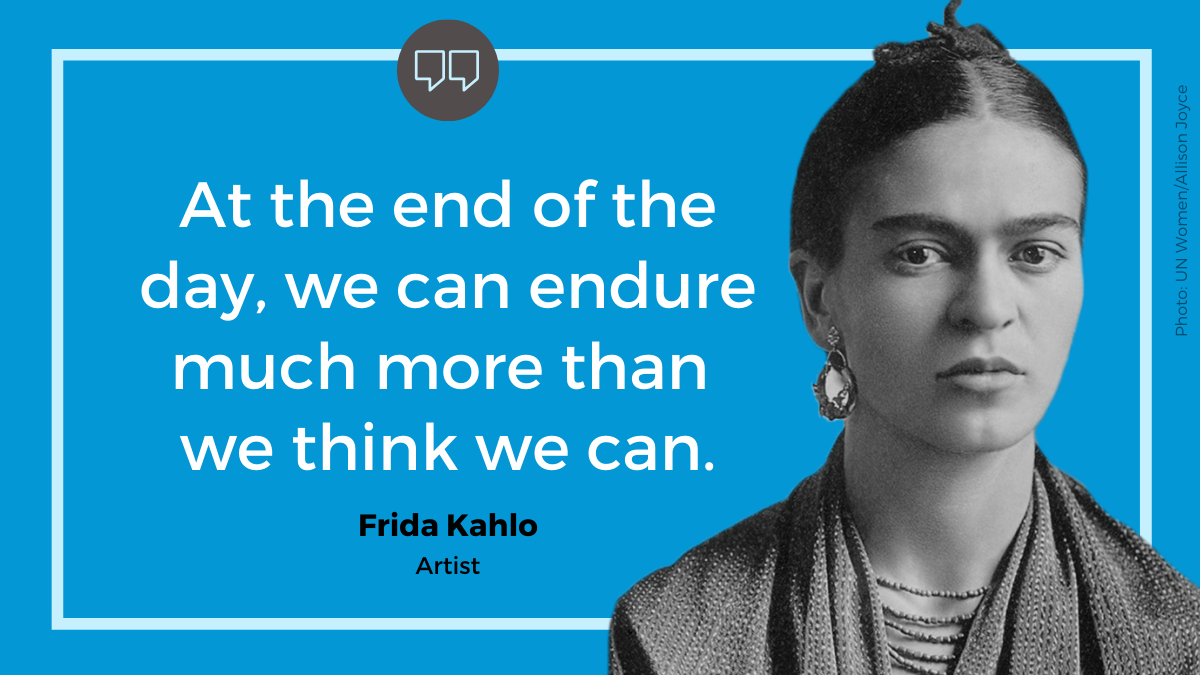 Born in 1907, Mexico City, Mexico, Frida Kahlo had to endure many hardships throughout her life that often confined her to bed, where she used art as a tool to cope with her personal crises. When she was 18, she was in a horrible bus accident that dislocated her spine in several areas, and left her with a lifetime of pain. She had to stay in the hospital for weeks and when she went back home for further recovery, she couldn’t leave her bed for months and could hardly move with a full body cast. That’s when she started painting from her bed on a special easel that her parents made for her to alleviate the boredom and the pain. Despite many more surgeries and treatment attempts, the chronic pain never went away and brought a lot of psychological pain with it. From the accident that changed her life forever to many more challenges that Frida had to face, including three miscarriages, a divorce, and depression, she continued to paint as a form of self-therapy. She painted to fight back, cope and express herself. 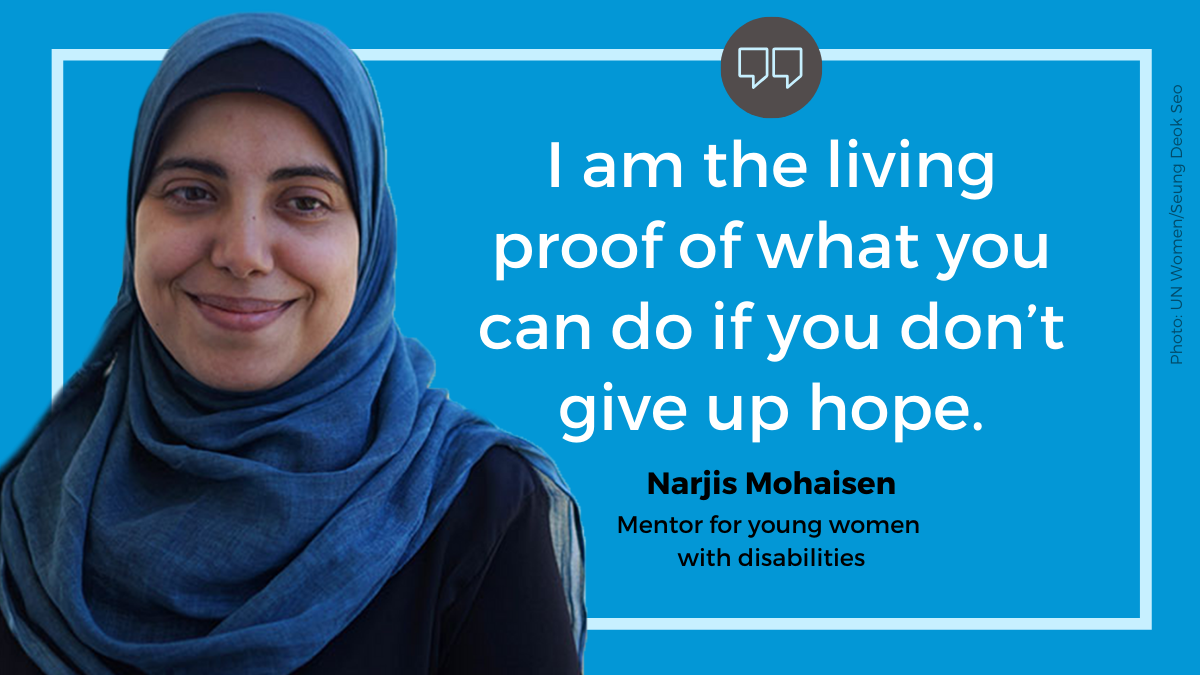 Narjis Mohaisen, now 29, lost her eyesight at the age of 13, but didn’t give up her studies. After graduating from university, she has discovered ways to support students with disabilities pursue their dreams. Narjis uses her own experiences in overcoming physical challenges to inspire and encourage others. She is a beneficiary of the Cash for Work project implemented by the Women’s Affairs Centre as part of UN Women’s Protection, Response and Preparedness to Address Needs of Disabled and Vulnerable Women in Gaza programme.

10. Sharing strength by speaking out 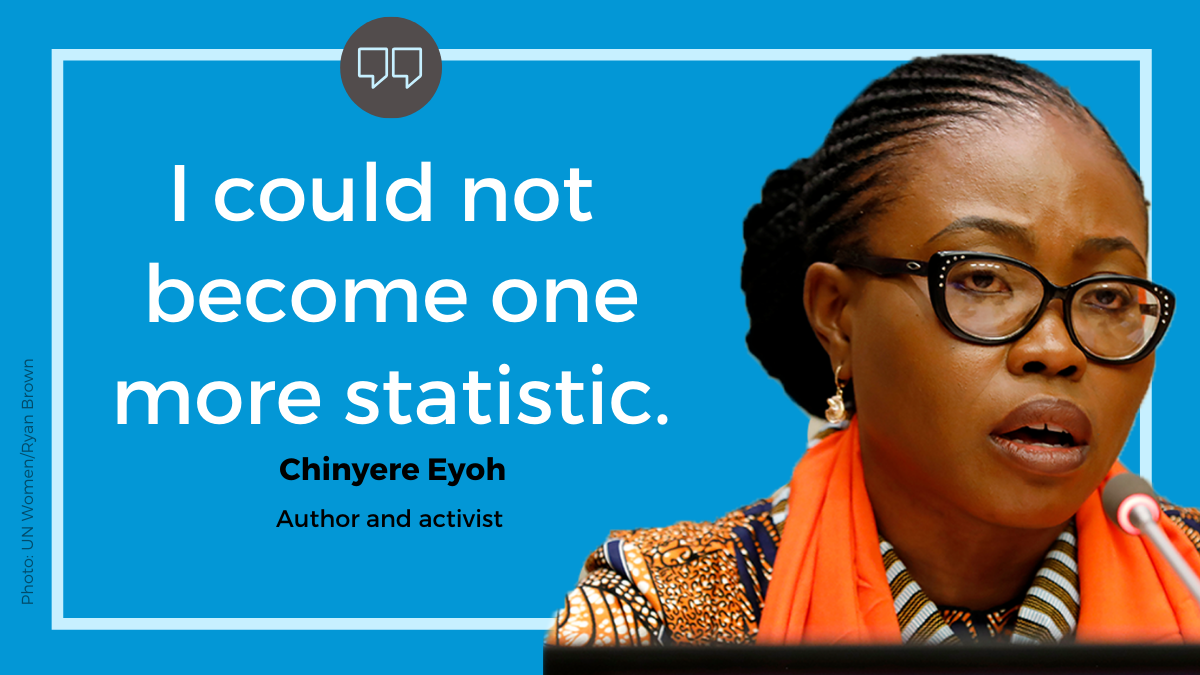 Chinyere Eyoh began Sexual Offences Awareness and Victims Rehabilitation Initiative (SOAR), Nigeria, after surviving multiple sexual assaults throughout her life. When she realized she wasn’t alone in her experience, she decided to speak out to help herself and other women heal. Today, SOAR works to protect young girls and support survivors by establishing safe spaces in schools and by training families, teachers, and traditional and community leaders so that they understand sexual violence is a crime and learn on how to protect children in their communities.

Related News
01/08/2021
Joint statement by UNFPA and UN Women: Impacts of the compounded political and health crisis on women and girls in Myanmar
30/03/2020
I am Generation Equality: Lee Mi-kyung, overseas aid administrator and women’s rights activist
15/08/2022
In focus: Women in Afghanistan one year after the Taliban takeover
15/08/2022
Statement: ‘Meticulously constructed policies of inequality’ – Afghanistan one year on
25/07/2022
Press briefing: The situation of women and girls in Afghanistan
END_OF_DOCUMENT_TOKEN_TO_BE_REPLACED