In her message for International Day for the Elimination of Violence against Women, UN Women Executive Director Phumzile Mlambo-Ngcuka says: "If I could have one wish granted, it might well be a total end to rape". Read the full message►

Rape, a single word with devastating impact that spans decades, even generations.

It destroys bodies and minds and puts peace in jeopardy.

When left unpunished or trivialized, it creates a pervasive culture where sexual violence is normalized, women and girls are undervalued, and entire communities and nations are left fractured.

Too many of us fail to name or challenge the rape culture that surrounds us.

Through words, actions and inactions; discriminatory laws or leniency towards perpetrators; through the media we consume, jokes we laugh at, and attitudes we do not question, we become part of a culture that allows rape to continue.

Although in recent years, the voices of activists and survivors through movements such as #MeToo, #TimesUp, #Niunamenos, #NotOneMore, #BalanceTonPorc, have reached a crescendo that cannot be silenced or ignored, violence against women and girls continues in every country.

One in three women are impacted by this violence; 15 million adolescent girls worldwide have experienced forced sex.

For the 16 Days of Activism against Gender-Based Violence, from 25 November to 10 December, and under the umbrella of the Generation Equality campaign to mark the 25th anniversary of the Beijing Declaration and Platform for Action, UN Secretary-General’s UNiTE by 2030 to End Violence against Women campaign is calling upon people from all walks of life, across generations, to take our boldest stand yet against rape.

What can you do?

Under the theme of “Orange the World: Generation Equality Stands against Rape”, how will you learn, question and take action? Get involved by learning more about rape culture, listening to survivors and sharing their stories, joining and starting conversations about consent. One of the key challenges in prevention of rape and sexual harassment is the lack of understanding around the issue of consent—only yes means yes, given freely by consenting adults, in every situation.

Small actions can make big impacts to stamp out rape culture. This month in Generation Equality, find stories, videos, infographics and action ideas that you can share to make a difference wherever you are.

Use the colour orange and join the conversation on social media using #orangetheworld and #generationequality.

Video: One story about rape is one story too many.

Across the world and in different contexts, women and girls universally experience rape, sexual violence, and abuse. From university campuses to armed conflicts, their voices and stories have reached a crescendo that can no longer be ignored or silenced. It’s time to take a stand to dismantle rape culture. 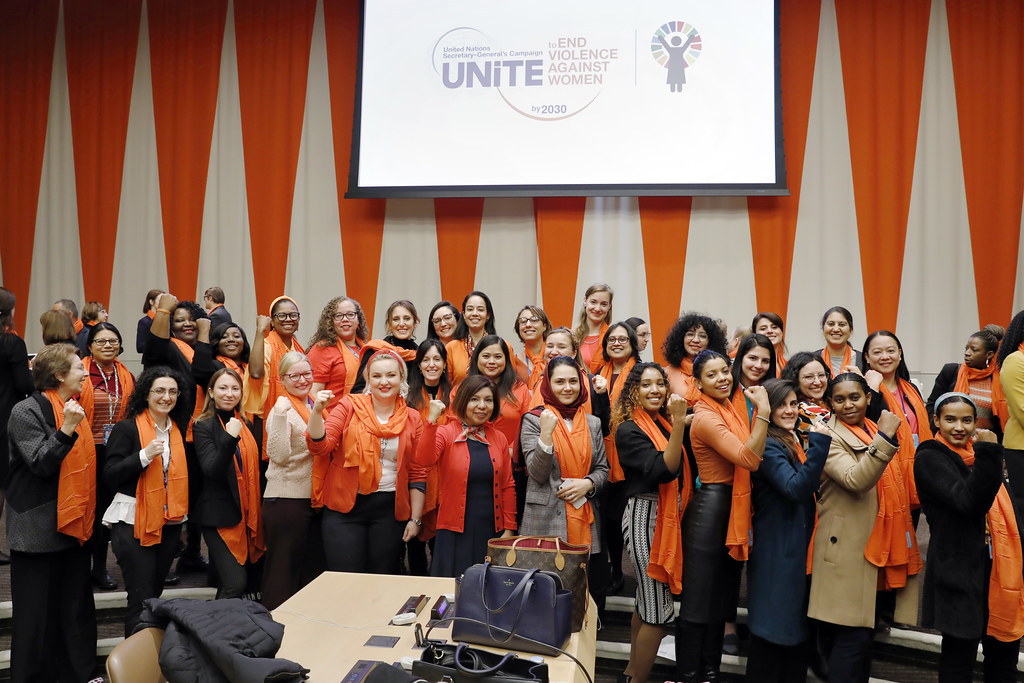 Stand with #GenerationEquality against rape culture.

Spread the word about rape culture and alert your community that it’s all around us, all the time.

Invite everyone to take action to end this pervasive culture.

Everything you need to join the conversation can be found in this social media package with sample messages and visuals in English, French, Spanish, Russian, Arabic and Chinese available here.

Show the world that you stand against gender-based violence!
1⃣Write your message of solidarity.
2⃣Click on GIF search.
3⃣Search for #GenerationEquality.
4⃣Select the GIF you like from @GIPHY.
5⃣Tweet using #orangetheworld and tag @UN_Women! pic.twitter.com/Pg8XzTd7sA

Show the world that you stand against gender-based violence!
1⃣Record or write your message of solidarity.
2⃣Click on GIF in stickers.
3⃣Search for #orangetheworld.
4⃣Select the one you like.
5⃣Post it on your Instagram story using #orangetheworld and tag unwomen. pic.twitter.com/kGeGWSfddS