Malian women make their voices heard: emergency aid, participation in the peace process, and justice for all

Our women have been beaten, raped, whipped, forced into polygamous marriages, and who knows what else. They have lost their dignity, but what is man’s dignity without that of women?” These are the words of Sophie*, a displaced woman living in Bamako, the country’s capital, but originally from Timbuktu in the north of Mali. 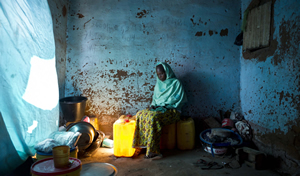 A young forcibly displaced woman rests in a room in Bamako. She suffered mental and physical trauma after being kidnapped by armed men and raped near her home in the Timbuktu region in April. Photo credit: UNHCR / H. Cau

Like hundreds of thousands of other people, Sophie fled the violence carried out by radical armed groups such as Ansar Dine, the Movement for Oneness and Jihad in West Africa (MOJWA), and Al-Qaeda in the Islamic Maghreb (AQIM), which have taken control of the northern part of the country, and applied an extreme interpretation of sharia law, with women as their targets. “We are the first victims of such crises; women and our children,” lamented Sophie.

The women assembled within the ECOWAS Women’s Peace and Security Network (REPSFECO/Mali), supported by UN Women, speak out at every chance they get, and as they meet leaders. Their message is clear. They ask for guarantees that women will be systematically represented in the various negotiation committees, for the assurance that there will be no amnesty for those who have committed rape and other forms of violence, for the economic re-establishment of displaced and refugee women, and for the opening of a humanitarian corridor to facilitate the provision of aid to those in occupied areas.

Seated in their traditional tents set up on the grounds of the Maison de la Femme et de l’Enfant in Bamako, the displaced women reiterated these fundamental demands during the visit of UN Women Executive Director Michelle Bachelet to Mali earlier this month. 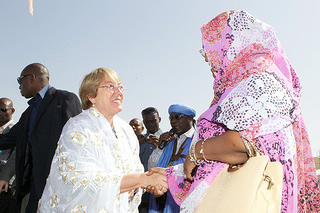 Michelle Bachelet greets a woman who has been displaced by the conflict in the North of Mali on 9 January 2013. Photo Credit: UN Women/DFA Com

They spoke emotionally about the situation of extreme violence that reigns in the north of the country. Rapes and forced marriages take place in towns under the control of these armed groups and women are forced to cover their faces, they explained. They also highlighted the economic costs of the crisis.

“It is women who generate revenue to cover most of the family’s expenses and today these women do not have the right to trade or go to the market for something that will keep the family going,” complained Dominique, from Gao.

Some women spoke about their journeys southwards risking their life and that of their children. The hardships continue, as they now live in precarious conditions in the capital, with very little to provide for their needs.

“Women are suffering on a daily basis as they are subjected to gender-based violence and abuses in all the occupied regions. Lasting peace that extends beyond the simple act of signing a peace agreement is unsustainable if it is not rooted in justice. When violations of human rights are not investigated, when victims’ calls for justice are not heard, the risks for renewed violence remain high,” said Ms. Bachelet during her discussion with the women.

Ms. Bachelet took the message of the Malian women to the Economic Community of West African States (ECOWAS) Headquarters in Abuja, the next day. The ECOWAS Member States are in the process of building an International Support Mission to Mali. Ms. Bachelet emphasised to ECOWAS the need for justice and an end to sexual violence, as well as the importance of the full participation of women in mediation and transition to ensure durable peace in Mali.

* For security reasons, the names of persons mentioned in this article have been changed in order to protect their identity.

#Malian women make their voices heard: emergency aid, participation in the #peaceprocess, & #justice for all owl.li/heKBc