“There is simply no way we can achieve development goals, or realize the human rights of women and girls –  both of which are intricately linked – while this harmful and very discriminatory practice continues,” he reiterated. 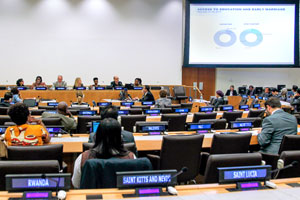 Held on 5 September 2014, in the final days of the sixty-eighth Session of the UN General Assembly, the panel was co-organized by Canada and Zambia, in keeping with General Assembly resolution 68/148 on child, early and forced marriage.

“We need to make sure that every girl grows up as a girl, not a bride”, said moderator Her Royal Highness Princess Mabel van Oranje of Orange-Nassau, Chair of ‘Girls Not Brides: The Global Partnership to End Child Marriage’.

Other speakers included representatives from Office of the High Commissioner for Human Rights (OHCHR) and UNICEF Nepal, as well as civil society, including Plan International, World YWCA, Girls’ Power Initiative, and the Center on Gender Equality and Health, UC San Diego. During the panel, the Permanent Representative of Canada announced that Canada and Zambia will present a new draft resolution on the topic to the sixty-ninth session of the General Assembly.

Panelists stressed that child, early and forced marriage are a human rights violation with detrimental effects on girls’ lives and on national economies and development. Its root causes are embedded in poverty, gender inequality, social norms, tradition and culture. The practice intersects with other forms of violence against women and girls, including physical, psychological, sexual, and economic violence, as well as other harmful practices, such as female genital mutilation.

The speakers highlighted that a comprehensive approach, increased resources and political will are all necessary to address child, early and forced marriage and its root causes. They identified effective interventions, including empowering and educating girls, service provision, community mobilization, data collection and research, and adoption of legal and policy frameworks in line with international commitments.

Legal and policy frameworks need to be better enforced, they underlined, while free and compulsory birth and marriage registration is necessary to ensure better implementation of child protection legislation. Panelists identified child, early and forced marriage as an impediment to sustainable development and, as such, stated that it needs to be specifically addressed in the post-2015 agenda.

Related News
11/02/2013
Abolishing Sang Chatti: Pakistan works to prevent compensation marriage and other forms of violence against women
07/03/2013
Child Marriages: 39,000 Every Day – More than 140 million girls will marry between 2011 and 2020
10/01/2013
Through film and life, rural women address poverty and early marriage in Egypt
10/10/2012
Q&A about the efforts of Kumbukani Mwanyongo to confront child marriage in Malawi
20/05/2021
I am Generation Equality: Martha Clara Nakato, advocate for bodily autonomy and sexual and reproductive health rights in Uganda
END_OF_DOCUMENT_TOKEN_TO_BE_REPLACED