In Brazil, new law on femicide to offer greater protection

Coinciding with the new law, Brazil is the first pilot country adapting the Latin American Model Protocol for the Investigation of Gender-related Violent Deaths, promoted by UN Women and OHCHR 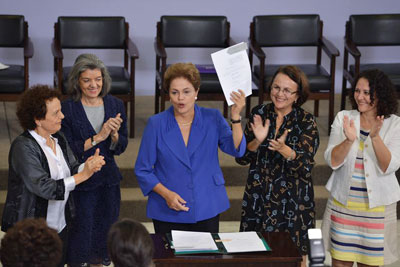 In a ceremony at the Presidential Palace, President Dilma Rousseff sanctions the Law of Femicide. Photo: Agencia Brasil/Valter Campanato

Announced on national television on International Women's Day and hailed as a commitment to UN Women’s new Step It Up campaign, on 9 March Brazilian President Dilma Rousseff signed a new law that criminalizes femicide, the gender-motivated killing of women, and sets tougher penalties for those responsible for such crimes. Noting that on average 15 women are murdered every day in Brazil simply for being women, she described the matter as “a gender issue”.

The new legislation amends Brazil’s Penal Code to redefine "femicide" as any crime that involves domestic violence, discrimination or contempt for women, which results in their death. Imposing harder sentences of between 12 to 30 years’ imprisonment, the bill also includes longer jail terms for crimes committed against pregnant women, girls under 14, women over 60 and women and girls with disabilities. Brazil is the 16th Latin American nation to include a Femicide Act in its national legal framework.

UN Women representative in Brazil Nadine Gasman said, “It should be noted that femicide is the killing of women for being women, in a vicious cycle of violence and torture that degrades the feminine identity. This law reinforces the policy commitment made by the President to the country, a commitment to zero tolerance of gender-based violence and to prioritizing the rights of female citizens with regard to empowerment and equality.”

The bill was an initiative of the Brazilian parliament based on the foundation created by the Joint Parliamentary Commission of Enquiry into the Omission of Public Authorities of Violence against Women and will seek to also ensure further implementation of the 2006 Maria da Penha Law on domestic violence. After being passed by the Senate in December 2014, the femicide law was approved by the House of Representatives on 3 March 2015.

More than 92,000 women were murdered in Brazil between 1980 and 2010. According to the Map of Violence 2012, the number of deaths rose from 1,353 to 4,465 in this period, representing an increase of 230 per cent. A report by the Brazilian Centre for Latin American Studies and the Latin American Faculty of Social Sciences ranked Brazil at 7th place internationally for the murder of women.

Since August 2014, UN Women, Brazil’s Secretariat of Policies for Women and the Austrian Embassy have been coordinating with law and justice officials to adopt the Latin-American Model Protocol for the Investigation of Gender-related Violent Deaths* in Brazil. The instrument provides guidelines and tools to support the work of those responsible for the investigation and prosecution of the gender-based violent death of women. 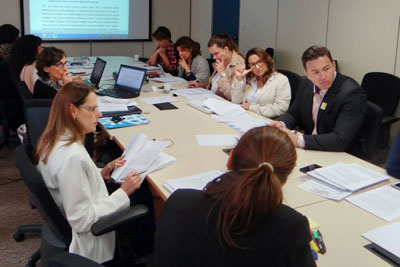 The 10-member Inter-institutional Working Group, that is working on adapting the regional femicide protocol to Brazil’s national context, met for the first time in December 2014. Photo: UN Women Brazil/Isabel Clavelin

It captures the experiences and lessons learned of more than 200 experts from 18 countries across Latin America and Europe who took part in an extensive consultation process over several years to achieve its wording. The process was coordinated by UN Women and the UN Office of the High Commissioner for Human Rights (OHCHR) as part of the Secretary-General's campaign UNiTE to End Violence against Women.

Several Latin American countries have shown interest in adapting the Model Protocol. On account of its high rates of violence and the existing provision, Brazil was chosen as the first pilot country in the region for incorporating the Protocol within its national legislation and guidelines, to investigate and collect material and other evidence of murder for legal processes.

To adapt the regional Protocol at national level, an Inter-institutional Working Group was set up, composed of 10 professionals – police, criminal experts, public prosecutors and magistrates – and representatives of various regions of Brazil. The Working Group met for the first time in December 2014, discussing procedures, routines and processes in investigating the murders of women.

Participating in the debate on femicide was criminal expert Herbert Boson, who practises in João Pessoa, capital of the state of Paraíba. He believes the protocol will expose the weakness of current investigations and provide learning opportunities to improve them.

“We, as criminal experts, are going to make this a reality to guarantee more robust investigations and more just punishments,” concluded Mr. Boson.

Professionals are still working on adapting the protocol, a task which is now taking on even greater relevance and urgency with the passing of the new Femicide Act.

Related News
01/08/2011
Police and Judges against Gender Violence in the Southern Cone
20/03/2020
I am Generation Equality: Vanina Escales, journalist and activist
25/02/2020
I am Generation Equality: Hingride Marcelle Leite de Jesus, rugby player, community facilitator
25/02/2020
Marta Vieira da Silva and One Win Leads to Another girls celebrate women’s empowerment in Brazil Carnival
23/05/2019
From where I stand: “We are the solution in Brazil, not the problem”
END_OF_DOCUMENT_TOKEN_TO_BE_REPLACED