Paris/New York — Empowering adolescent girls and young women through education is the aim – and the name – of a programme launched in New York today by UNESCO, UN Women, the UN Population Fund (UNFPA) and the World Bank. 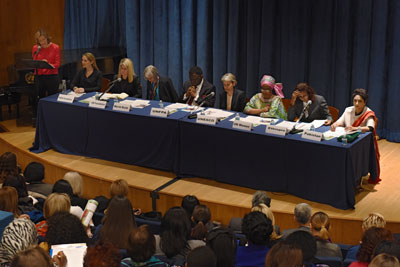 Announced by UNESCO Director-General Irina Bokova, UN Women Executive Director Phumzile Mlambo-Ngcuka and UNFPA Executive Director Babatunde Osotimehin during a meeting of the 59th Commission on the Status of Women at United Nations Headquarters in New York, the new programme provides a coordinated and collaborative effort to close the persistent gender gap in education and accelerate development.

“We know increasing the education of adolescent girls and young women carries impact across generations,” said Irina Bokova during the launch event. “We know education is the best cure against transmission of HIV/AIDS from mother to child. We know it is the best way to avert child marriage. We know if all women completed primary education, we could reduce by 70 per cent the number of women dying in childbirth in sub-Saharan Africa – saving over 100,000 lives every year. Some 6.1 million children under 5 die in poor countries every year – we know we could cut this by half if all women had secondary education.”

UNESCO’s statistics show that of the 57 million out-of-school primary children around the world, 31 million are girls, and the number is higher still for secondary. Similarly, two-thirds or 493 million of the world’s adult illiterate population are women.

“We must ensure that every door to the education of girls and women remains open across the life cycle; that girls and women who drop out of education have second chances; that they have the relevant skills to transition to productive lives and full citizenship; and that the empowerment of girls and women becomes an inseparable part of the return on our investments in education,” said Phumzile Mlambo-Ngcuka, Executive Director of UN Women.

“Today, too many girls do not complete school due to teenage pregnancy and early and forced marriage,” said Babatunde Osotimehin, Executive Director of UNFPA. “Providing girls and young people with comprehensive sexuality education and sexual and reproductive health information and services protects the right to education and health, and advances gender equality and the achievement of internationally agreed goals.”

The joint programme will be rolled out gradually in 20 nations where the education gender gap is most critical, starting with Mali, Nepal, Niger, Pakistan, South Sudan and the United Republic of Tanzania. It will concentrate on four areas: improving quality and relevance of education; raising awareness at all levels to create a favourable environment for gender equality; strengthening links between the health and education sectors; and improving the data base of statistics on gender and education. It will also harness the potential of information and communication technologies to improve education delivery and content and encourage their further application for income generation, lifelong learning and exercising citizenship.

The new programme falls under the framework of the Global Partnership for Girls and Women’s Education, launched by UNESCO in 2011, and is guided by the conviction that educating girls and women can break the cycle of poverty and foster greater social justice, economic development and sustainable peace.

Related News
05/03/2019
Safe spaces for women, by women, bring smart infrastructure for all
29/06/2018
UN Women Executive Director to join UN Deputy Secretary-General for a high-level visit to South Sudan, Chad and Niger
05/03/2018
Sweden strengthens partnership to accelerate economic empowerment for rural women
12/12/2017
Press release: UN Initiative to boost resilience of women and youth in the Sahel through climate-smart agriculture launched at One Planet Summit
11/12/2014
Around the world, women and men of all ages “orange their hoods” to end violence
END_OF_DOCUMENT_TOKEN_TO_BE_REPLACED