Sueny Nogueira, a 25-year-old circus performer in Brazil, has been inspired by projects run by the Casa da Mulher Trabalhadora (CAMTRA – the “House of Women Workers”), an organization that works to prevent violence against marginalized groups of young women in Rio de Janeiro, Brazil, and build a just and equal society. 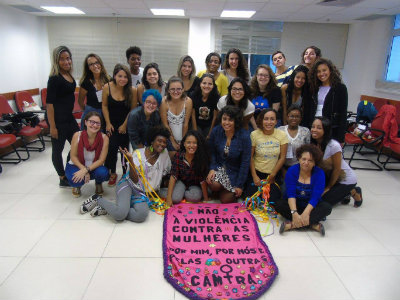 “Before I didn’t talk much about this,” she said. “[But] within the movement and feminist spaces I could realize how much we suffer and we must be united.”

A particularly brutal gang rape of a 16-year-old girl in Rio de Janeiro in May 2016 prompted public outcry at the prevalence and persistence of violence against women and girls in the city. UN Women Executive Director Phumzile Mlambo-Ngcuka called for “zero tolerance for violence against women and girls” in response to the attack and said “the risks are highest for the most vulnerable”.

CAMTRA stages artistic and cultural events in areas where there are large concentrations of young people in order to raise awareness about violence against women and girls. The events highlight issues that include human trafficking, sexual exploitation and technology-related violence perpetrated through videos and photos.

Read the full story on the UN Trust Fund to End Violence against Women website.