From 6-8 June, UN Women Executive Director Phumzile Mlambo-Ngcuka is undertaking her first official mission to Canada, visiting three cities in as many days—Ottawa, Toronto and Waterloo. Read the announcer. 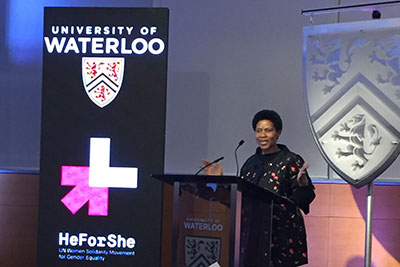 On the last day of her official mission, the Executive Director travelled to the University of Waterloo. Ms. Mlambo-Ngcuka addressed students, some of whom are studying Science, Technology and Engineering and Math (STEM) fields where women are under-represented, and participated in a question and answer session with students and faculty. 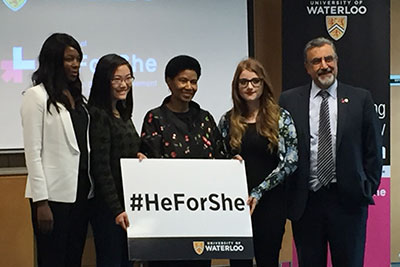 Ms. Mlambo-Ngcuka also met with University of Waterloo President and Vice-Chancillor Feridun Hamdullahpur, who is one of HeForShe’s 10X10X10 Impact Champions. In an effort to boost female enrolment in STEM programmes to 33 per cent by 2020, Mr. Hamdullahpur has instituted scholarships for women pursuing STEM courses. 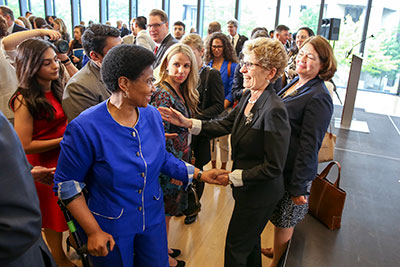 The Executive Director took part in a discussion on women in business hosted by the Premier of the Canadian Province of Ontario Kathleen Wynne. Photo: Ontario Liberal Caucus.

On the second day of her mission, Ms. Mlambo-Ngcuka spoke at a panel discussion, hosted by Ontario Premier Kathleen Wynn, on women's representation in boards in both the public and private sector. Premiere Wynne also announced that she has accepted to serve as a champion of UN Women's new global coalition on Equal Pay for Work of Equal Value, becoming its first member. During the event, Premier Wynne announced new gender diversity targets to ensure more women have the opportunity to reach top leadership positions at provincial agencies and other government organizations. Read the press release. 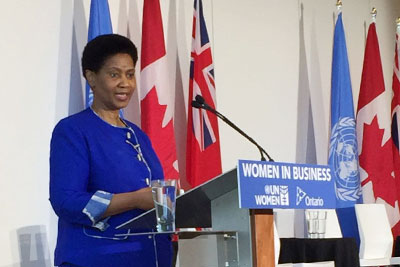 UN Women Executive Director Phumzile Mlambo-Ngcuka speaks at an event in Toronto on women in business and equal pay, hosted by the Premier of Ontario on 7 June. Photo: UN Women/Erin Gell

Ms. Mlambo-Ngcuka welcomed Premier Wynne to the Coalition: “This initiative will bring much-needed, urgent progress on closing the gender pay gap and will impact millions of women and their dependents. Canada's promotion of women in leadership is far-sighted; research shows categorically how much women could contribute to the economy. This takes more than just raising wages; it needs strengthened equal-pay laws and policies to support unpaid care and domestic work, and I know these are in sight along with quotas to increase women’s senior representation. All of this would really make a difference in the lives of women and girls and would set a formidable and influential leadership example in championing the fight towards gender equality.” 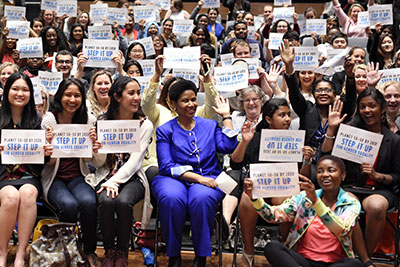 Ms. Mlambo-Ngcuka and UN Women Deputy Executive Director Lakshmi Puri attended “Youth Dialogue: Connecting Generations in Achieving Gender Equality for a Planet 50-50 by 2030”, a public event at the University of Toronto hosted by @UNWOMEN4Youth, the UN Inter-Agency Network on Youth Development’s Working Group on Youth and Gender Equality and other partners. The Executive Director discussed both Canadian and global progress on gender equality with students, leaders, and activists. 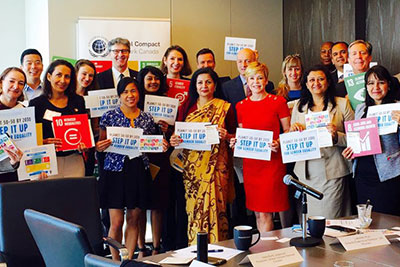 Participants in the Global Compact breakfast on 7 June pose for a group photograph. Photo: UN Women 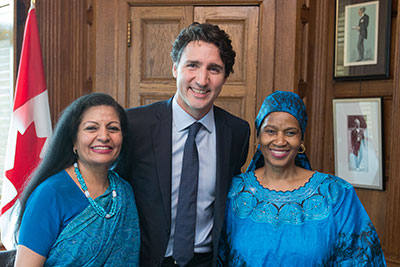 On the first day of her mission, Ms. Mlambo-Ngcuka and UN Women Deputy Executive Director Lakshmi Puri met with Canadian Prime Minister Justin Trudeau (centre), in Ottawa on 6 June. The Prime Minister reaffirmed his commitment to defending gender equality and to UN Women's HeForShe campaign, for which he became an advocate in March. 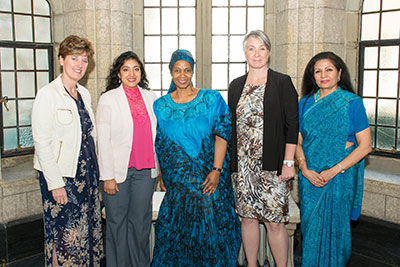 In the afternoon, the Executive Director and the Deputy Executive Director met with Canada's Minister of International Development and La Francophonie Marie-Claude Bibeau, Minister of the Status of Women Patty Hajdu, and other senior government officials at the federal Ministry for Global Affairs to discuss the 2030 Agenda for Sustainable Development, women’s economic empowerment and leadership in peace and security. 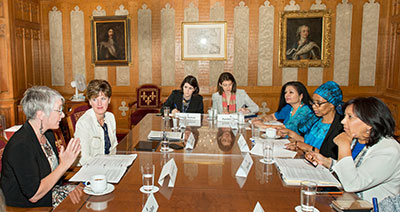 The conversations also included the importance of engaging men and boys to advance gender equality, particularly in the context of UN Women’s HeforShe campaign. She also had a working lunch with other ministers and senior officials and engaged in a consultation on the High-Level Panel for Women’s Economic Empowerment, for which UN Women serves as the Secretariat. 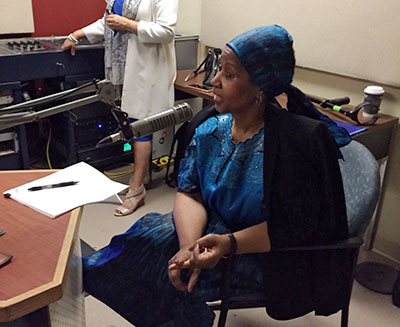 During an organic discussion with four members of Canada's National Campus and Community Radio Association, held at CHUO Radio Studios at the University of Ottawa ahead of the Association's annual conference, the Executive Director fielded questions on violence against indigenous women, how to include transgendered people in the conversation on women's rights, and how Canada can take a global lead on ending discrimination. She urged broadcasters to use their influence to change the world and make a difference.