Take five: “The most effective solutions come from listening to women”

Shamima Ali is a feminist activist from Fiji. She is the chairperson and one of the founding members of the Pacific Women’s Network Against Violence Against Women. She has been a Coordinator at the Fiji Women’s Crisis Centre for the past 31 years. Ms. Ali has also served as a Human Rights Commissioner in Fiji from 2004 to 2006. Her work has included developing and conducting training with police and other service-providers in Fiji and in the Pacific region. Over the years, UN Women has worked in partnership with FWCC on advancing national guidelines for gender-based violence response in Fiji, and supported activities to prevent gender-based violence, including during crises. Ms. Ali recently spoke at an event organized by UN Women at its Headquarters in New York where she talked about what’s driving high levels of violence against women in Fiji and how it can be prevented. 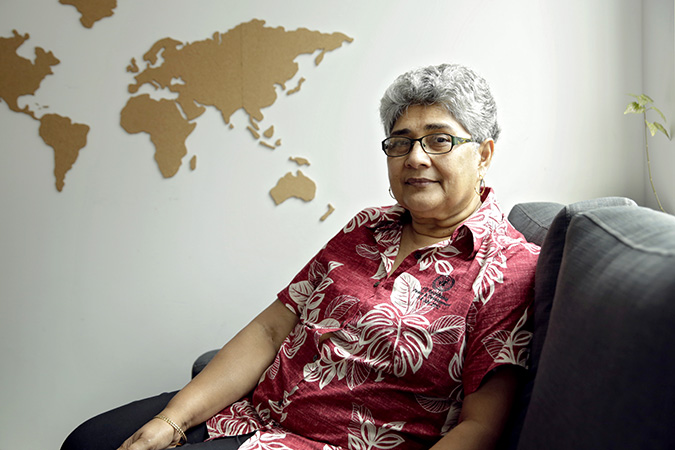 In the Pacific, two out of three women experience violence. What is driving such high levels of violence?

In the Pacific, we are a patriarchal and religious population. Both culture and religion are used as an excuse to condone violence against women. Men are seen as leaders, and there is a strong preference for male children. A woman may continuously reproduce to have a boy child, and when resources are limited, boys will get more education.

Boys grow up with a sense of entitlement and girls grow up believing that women are there to cater to men’s needs. Women are expected to follow strict social norms, and when they step out of those norms, they are punished.

Combine that with structural discrimination and violence—girls and women are denied education, lack ownership of land and assets, and are therefore poorer—and you have the perfect conditions for violence against women.

What are the biggest challenges in Fiji for women and girls facing violence?

Every woman in Fiji is expected to get married to a man and once married, it’s her responsibility to make that marriage work. If anything goes wrong, it’s seen as her fault.

Women don’t see violence as something wrong… it’s seen as normal. If she complaints, other women around her tell her it’s what they all went through. If she reports the abuse to the family or the faith leaders, their priority is to keep the family together. If she reports to the police, they may not take her complaint, even though the law says that as soon as a woman reports violence, the police must charge the abuser and let the court decide.

The norms around men-women relationship are the hardest to change. That’s why we have to work with young girls and boys [so that they don’t grow up believing this is normal].

What can prevent this violence? How is Fiji Women’s Crisis Centre working to prevent violence against women?

We have to get on the same page about the issue first. We cannot treat violence against women as a health issue, or women’s issue alone. We have to look at gender inequality as the main issue.

We have started working with young boys and girls in the islands, and we are working to change parenting. How we bring up girls and boys must change, and this is part of our daily work now.

Two other approaches are also showing promising results—we engage religious and traditional leaders, since they have a lot of influence; and we have set up a model programme, Male Advocacy for Women’s Human Rights, where men undergo a learning and awareness programme to change themselves first and then influence change in other men.

When we first go into a community, we train the women. Then we go back and train the men. Every four-six month, we go back to each community and have conversations with men, women and children separately, to assess progress.

One child said to me, ‘father comes home earlier now… there is less violence.’ The wife said, ‘he is helping me in the house more. He washes his own tea cup.’

It takes time to change mindsets and it’s hard work, but our work has put ending violence against women on everybody’s agenda.

You have said that voices of women must inform how we end the violence they face—can you tell us about how women’s voices have led to better solutions in Fiji?

The most effective solutions come from listening to women. For instance, earlier, when we started doing this work, people didn’t think police need to be trained to handle reports of abuse from women. There are laws in place, but when we talked to the women, they started telling us how they were not taken seriously by the police when they wanted to report violence. That’s how the police training came about.

When we were holding community consultations about the domestic violence law, the women explained that the only way they could get a restraining order was from the court and that could take days, or weeks. They could be killed by that time! We advocated for the law to provide easier ways of obtaining a restraining order against an abuser. Now the restraining order paperwork is available at the police station. When a woman reports a case, the police can call the magistrate, even on a weekend, and the paperwork can be faxed and approved, so that the survivor doesn’t have to wait for a court date.

What motivated you to become an activist and what keeps you going?

I am a survivor, my mother was a survivor, and I had a strong sense of justice within me. That’s what propelled me to join this work. Once I joined, there was no looking back.

The hardest thing for me is seeing women and girls continually violated. When women don’t get justice, it’s heartbreaking, but it makes us advocate even stronger.

I am working on this issue for more than 30 years now, and the violence itself has not reduced drastically. But we see more women are coming forward to report violence—10 – 15 per cent are reporting domestic violence annually, and from 1 per cent, the rate of reporting on rape has gone up to 4 – 5 per cent—and this gives me hope. When I see confident, young women being able to continue their education, that gives me hope.

The male advocacy programme gives me hope—I have seen men change. These little wins need to be celebrated. The alternative [of hope] is unacceptable.