In three Women’s Centres supported by UN Women in Tanzania, women refugees find safe spaces to network, learn new skills and recover from the trauma of war and sexual violence. Many have picked up new trades and advocate for their own rights. Some have found new family and new lives. 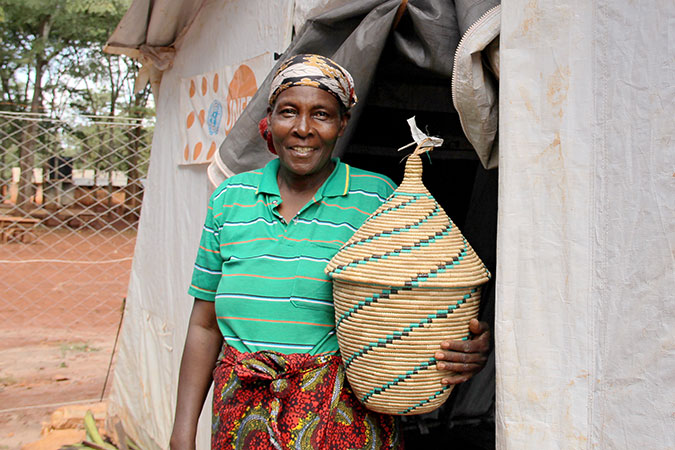 Korotirida Minani found a second home in Nduta Refugee camp after fleeing from her hometown in Burundi in late 2015. Photo: UN Women/Deepika Nath

Mpawenayo Seraphine, 38 years old, walked over 60 km with her husband and six children to reach the Tanzanian border from Rutana, Burundi in September 2015. They were fleeing the escalating violence in her native village.

The family found safety at the Mtendeli Refugee Camp. There Seraphine learnt entrepreneurship and small business skills at the UN Women-supported Women’s Centre. Within a year, she built on her tailoring skills and learnt new techniques and styles of stitching.

“It makes me so happy to see people wearing the clothes that I have stitched,” says Seraphine, as she shares her plans to set up a shop outside the camp. She is now part of a tailoring group of ten women who meet regularly at the Centre, learn from one another and design different types of skirts, blouses and shirts. Income from their sales supplements food rations provided at the camps for their families.

“I want to become a famous designer one day,” says Seraphine. “Maybe you will wear something I have stitched,” she adds. 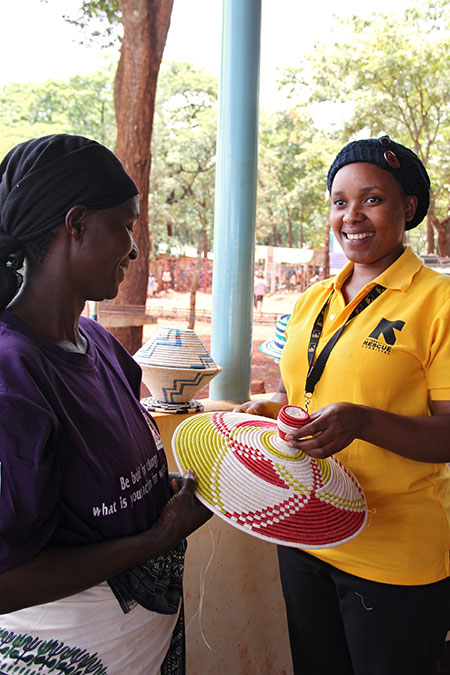 Since 2016, UN Women has supported the International Rescue Committee (IRC) to provide training and services through Women’s Centres in the Nyarugusu, Nduta and Mtendeli Refugee Camps in Tanzania. These camps host over 500,000 refugees fleeing violence in neighbouring Burundi and the Democratic Republic of Congo. The project is funded by the United Nations Central Emergency Response Fund, with support from the Government of Norway.

“Refugee women and girls play an integral role in post-conflict reconstruction and in rebuilding the social fabric of their communities,” says Hodan Addou, UN Women Representative in Tanzania. “The Women’s Centres provide a safe and enabling environment for networking, and meaningful discussions of shared traumatic experiences, which aids their recovery.”

Beatrice Emanuel, the Women’s Empowerment Supervisor from IRC, UN Women’s implementing partner at the Mtendeli Women’s Centre, agrees: “There is a noticeable change in women’s attitude and confidence after they have spent some time at the centre. The centre is not only a space for women to learn new skills to earn a living, it also gives women some relief from their daily chores.”

All three Centres, completed in late 2016, have large patios and verandas to ensure adequate space for classes in tailoring, basket weaving, adult literacy and pottery. Each building has counselling rooms where refugee women can seek confidential guidance about family planning and gender-based violence.

Some 167 kilometers from Mtendeli, at the Nduta Refugee Camp, Korotirida Minani, 57, is weaving a basket with a group of women. Her hands are busy interlocking intricate designs of dried grass shoots and strips of plastic. A large basket will take her about one week to complete and will sell for $8. 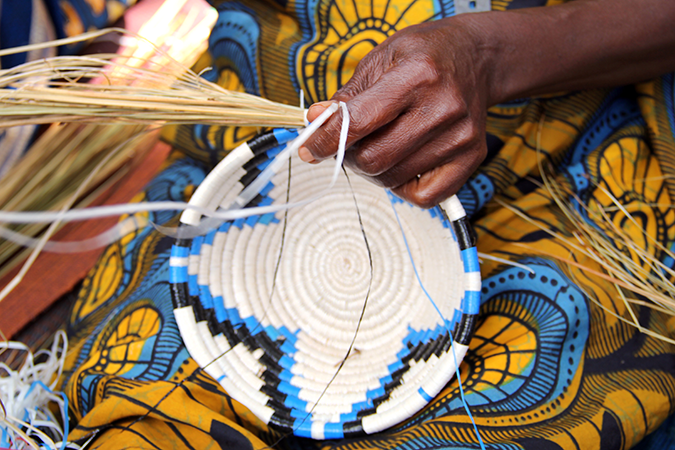 “I wish we could sell our products in markets outside the camps to new customers,” she says. “Then we would earn almost double what we make now.”

Minani fled from her hometown Ruyigi in Burundi in late 2015, with her three children and one grandchild, when rebels stole her land and threatened to beat her. She had lost her husband during the ethnic conflict in 1993 but in Nduta, she found a second home. 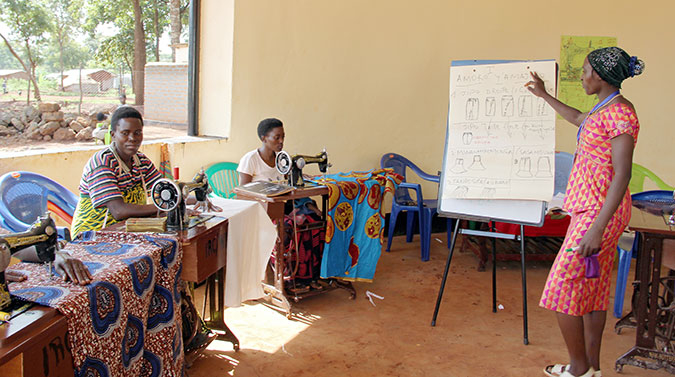 In times of crises, existing gender disparities often widen. The Women’s Centres implement a 16-week programme that works with the male residents of the camps to break gender stereotypes and prevent harmful cultural practices. Mzalendo Mtokambali, 36, is one of the lead facilitators for the programme in the Nyarugusu camp. Mtokambali fled the Democratic Republic of Congo in 1999, and has been living in the refugee camp for 18 years now.

“It is very difficult to convince men to support their wives, mothers and sisters in household activities,” he says. “They argue that it is women’s work and that men don’t need to contribute, as they are the main breadwinners. I try and convince them that women also need help in the raising the children, and that women can also go out to earn a living.”

At the beginning of the programme, men were resistant to changing their ways. 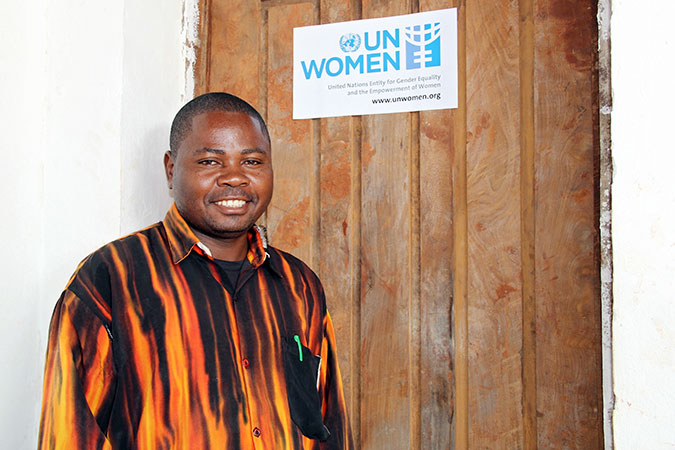 Mzalendo Mtokambali is one of the lead facilitators for the 16-week programme that works with the male residents of the camps to break gender stereotypes and prevent harmful cultural practices in the Nyarugusu camp. Photo: UN Women/Deepika Nath

“My wife is a businesswoman and works at the market the whole day,” explains Mtokambali. “I take care of the house and children when she is away, and everyone has a fixed schedule of chores. We both work together to ensure better mental and physical health for all of us”.

Seeing the benefits of double incomes, reduced workloads and better performance of the children at school, the cynics have come around and now ask for his guidance and support on how to help their wives.

For many women in the camps, the Centres have ushered in new beginnings. “Even though there are many challenges, there is no reason to go back to Burundi,” says Korotirida Minani. “I have met so many other women who suffered just like I did. We have found a new way to live, and this is my family now. I feel safe here.”

Related News
24/10/2014
Braving dust storms, women plant seeds of hope at the Dadaab refugee camp
31/01/2020
UN Women and Unilever team up in Tanzanian tea plantations to create safer communities for women
24/12/2018
From where I stand: “We must believe in ourselves that we can be leaders”
24/08/2018
From where I stand: “Because I know my rights, I can speak up for myself and for other women”
11/04/2017
Community leadership makes markets safer for women traders in Tanzania
END_OF_DOCUMENT_TOKEN_TO_BE_REPLACED