Following a high-level visit to Nigeria, the joint UN-AU delegation led by UN Deputy Secretary-General Amina Mohammed will be in the  Democratic Republic of the Congo (DRC) to urge action to strengthen meaningful participation of women in peace and security and elections. The UN Deputy Chief will be joined in the DRC by UN Women Executive Director Phumzile Mlambo-Ngcuka, the UN Special Representative on Sexual Violence in Conflict Pramila Patten, and the African Union (AU) Special Envoy on Women, Peace and Security Bineta Diop.

The UN-AU officials are expected to visit an Internally Displaced Persons (IDP) camp in the North Kivu province, one of the regions affected by several years of civil war. The conflict dramatically affected the population there, especially women and girls, who faced the brunt of sexual exploitation and forced displacement. Sources estimate that more that 1.8 million of people (30 per cent of the province’s population) are in perpetual displacement due to armed conflicts. The visit takes place at a time of escalating tensions and humanitarian needs, alongside growing violence in the Kasai region.

The visit will provide an opportunity for the UN-AU representatives to hear from women’s organizations in the country about their concerns around the humanitarian, economic and political situation. The delegation will stress upon women’s active participation and leadership in peace-making and in conflict prevention as an imperative for sustainable peace. They will also call on the government to ensure the protection of women and girls’ rights, safeguarding them from gender-based violence, including forced and child marriage, and ensuring that they have equal access to the distribution of supplies, services and healthcare.

In their meeting with the National Elections Institute authorities, the UN-AU officials will discuss the need to accelerate women’s full, equal and effective participation and leadership at all levels of decision-making and public life. Evidence shows that when women are in decision-making positions, more inclusive decisions are made. Women leaders tend to be highly effective at working across partisan lines to enact laws that help all segments of society and advance gender equality. Yet, the overall representation of women in decision-making remains low in DRC, and women’s enrolment as voters and candidates continues to show a downward trend. For instance, only 12 per cent of the candidates in DRC’s legislative elections in 2011 were women, and women represented less than 9 per cent in the National Assembly and less than 5 per cent in the Senate.

Establishing mandatory quotas for the inclusion of women in electoral lists by political parties, and increasing recruitment of women as election agents, observers and witnesses of the elections would help advance progress towards women’s leadership.

During the visit, the officials will have an opportunity to meet with several representatives of the Government, including President Joseph Kabila and the Minister for Foreign Affairs, Léonard She Okitundu, as well as with the diplomatic community, to discuss gender-responsive implementation of the Sustainable Development Goals.

The delegation participated in a summit of Congolese women politicians and leaders of civil society organizations on 25 July in Kinshasa, to discuss challenges and potential solutions. In a meeting at the “Maison de la Femme” [Women’s Centre], Goma, on 26 July, the high-level delegation was joined by Ms. Adele Bazizane, North Kivu  provincial Minister of Education, Gender and Youth,  survivors of violence, as well as UN and civil society representatives working to combat sexual violence against women in Internally Displaced Persons (IDP) camps. The delegation undertook a tour of the Women’s Centre and a special exposition, which showcased products made by women benefitting from income-generating initiatives. 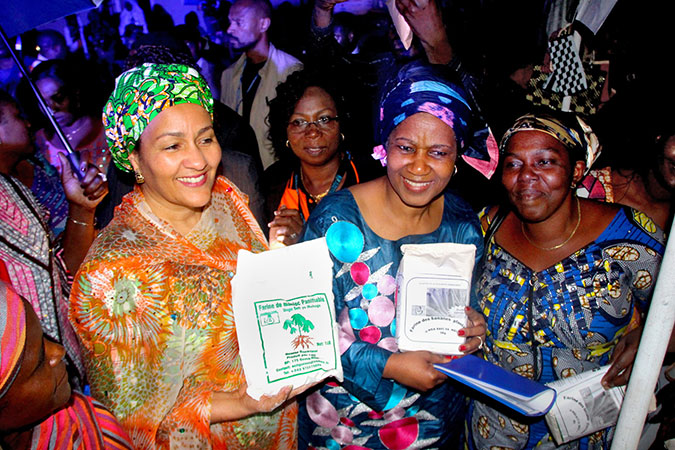 Speaking at the Women’s Centre, UN Deputy Secretary-General Amina Mohammed said: “Without changing the mentality of men, gender equality will never happen…we must help them understand that we are sisters, mothers, and voters! We are equals…Sustainable peace is about women in decision making.”

“I want to thank the women themselves for courage, for resilience and for never giving up. You have come a long way. We come here in solidarity as African women,” said UN Women Executive Director Phumzile Mlambo-Ngcuka. “The next generation sits on your shoulders…You are survivors. Thank you for the big bold steps you are taking.”

On 26 July, the delegation also visited the Mugunga camp for Internally Displaced Persons, which hosts 1,273 households consisting of 3,998 people.  The delegation met with beneficiaries of UN Women's project, “Multisectoral Response to Violence against Women and Children in the province of North Kivu”, which has provided skills training and start-up support to displaced and returnee women and survivors of violence, to build their economic resilience. Opened in 2008, the camp is in transition and is scheduled to close this month. 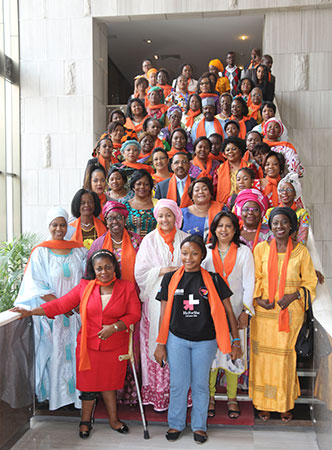 Amina J. Mohammed, Deputy Secretary-General of the United Nations, along with UN and AU officials, including UN Women Executive Director, Phumzile Mlambo-Ngcuka, met this morning at the Kempinski Hotel, a delegation of women leaders in the DR Congo to revitalize women's participation and women's leadership in peace, security and development. Photo: MONUSCO/John Bompengo

Over the past two days, The joint UN-AU delegation met with key members of the Congolese Government, the donor community, as well as women leaders from the civil society to discuss how to accelerate progress on women’s empowerment, their participation in the electoral process and peacebuilding.

During the joint UN-AU visit in DRC, UN Deputy Secretary-General Amina Mohammed said at a press encounter following her meeting with Léonard She Okitundu, Vice-Prime Minister of the DRC: Peace is the bedrock – the foundation – to allow us to develop our full potentials, but also to ensure that human rights are respected. Here we see that women's rights, which are human rights, are not respected and we have a long way to go.” She commended the Government's efforts to combat gender-based sexual violence, noting that having a woman in charge was probably the reason for the progress, “but what we really want to see is zero.” Read more»

The high-level UN-AU joint delegation began its four-day visit in the Democratic Republic of the Congo on 24 July. Briefing reporters in Kinshasa, UN Deputy Secretary-General Amina J. Mohammed highlighted the importance of engaging Congolese women in the country’s implementation of the Sustainable Development Goals. The delegation was received by the country's Vice-Prime Minister, Léonard She Okitundu.