From where I stand: “Don’t tell me how to dress!”

Thai supermodel Cindy Sirinya Bishop is the founder of a campaign to stop victim-blaming, which has galvanized women all over the country. She is now taking the campaign to different platforms, public events, and universities in Thailand and abroad. 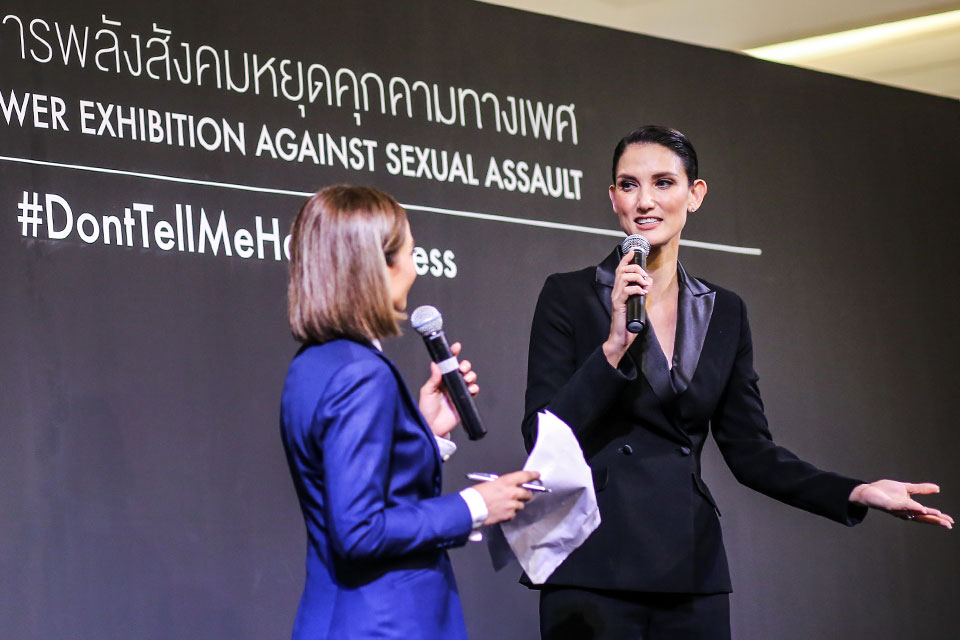 This was the Thai authorities’ measure to prevent cases of sexual abuse, as many Thai women report being groped or assaulted at the annual festival.

It just struck a chord in me. When I saw this warning, I was so angry that women were warned to dress appropriately, but men were not being told to behave. I posted a video saying “Women have the right to dress however we choose, as long as it’s not illegal. Sexual assault and harassment is never the woman’s fault! Tell men to keep their hands to themselves!”

The video went viral and that’s how the #DontTellMeHowToDress campaign was born. The message went viral not because of my celebrity power as a Thai supermodel, but because of the many other women who felt the same as I did.

I decided to go further with turning the campaign into an exhibition, inspired by a University of Kansas exhibition where they displayed clothing from sexual assault victims. I teamed up with UN Women and other partners to break the cycle of victim-blaming and dispel the myths and stereotypes by spotlighting the outfits worn by women who were sexually assaulted.

The #DontTellMeHowToDress vision is of a world in which gender equality is the norm, sexual assault and violence against women have no place, and all children have access to proper educational means, to inspire them to become balanced, respectful and responsible members of society. The next step will be working on a project to talk about consent in Thai culture, especially with young people.

If there is a time in our history when we need women to stand up for their rights, that time is now.”

Cindy Sirinya Bishop, 39, is a host, model and actress, and creator of the #Don’tTellMeHowToDress Campaign to challenge the notion that women’s appearance and behaviours are to blame when they are sexually assaulted. She was also an organizer for “The Social Power Exhibition against Sexual Assault”, which was supported by UN Women and the Government of Thailand. Her work supports Sustainable Development Goal 5, which aims to promote gender equality and end violence against all women and girls.

Related News
26/02/2020
I am Generation Equality: Cindy Sirinya Bishop, celebrity and activist
18/11/2019
From where I stand: “If we talk more about sexual harassment in our society, we’ll change mindsets”
13/11/2018
From where I stand: “I launched Thaiconsent to introduce the concept of consent”
26/11/2013
Bangkok buses move towards safer commuting
16/04/2021
I am Generation Equality: Net Supatravanij, social entrepreneur and activist against gender-based violence
END_OF_DOCUMENT_TOKEN_TO_BE_REPLACED