Through training for transit staff, public service videos and pamphlets, the Bangkok Mass Transit Authority aims to crack down on sexual harassment on city buses.

Serving 3 million commuters per day on its 3,509 buses, the Bangkok Mass Transit Authority (BMTA) has joined global efforts to end violence against women and girls. Through its “Orange your Journey” initiative, a 37-second public service video spot [in both English and Thai] is now playing on 360 air-conditioned city buses, and transit staff are being trained  to address and prevent sexual harassment on public transport.

In addition to the videos, the BMTA has also released some 10,000 stickers, pamphlets and video clips to help efforts to end sexual harassment on public transport. The awareness-raising material calls on Thai commuters to, “Never accept; never allow; never use violence against women and children”. The public is encouraged to report violence in public or at home to the One-Stop Crisis Centre Hotline, which was established in April 2013.

To train staff, the BMTA has collaborated with UN Women and the Teeranat Kanjanauksorn Foundation to create the “Pineapple Eyes” project, which involves providing BMTA staff with a better understanding of sexual harassment as well as the tools to address the issue. Through this partnership, 500 of 14,000 of BMTA's staff at eight bus districts in Bangkok and its vicinity have already been trained. 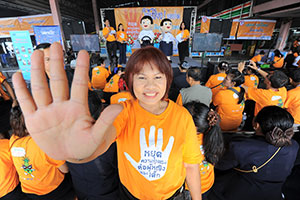 “I am committed to making buses in Bangkok safe for women and girls,” said Chutima Boonjai, Vice-President of the International Transport Forum of the BMTA.

The training aims to recognize sexual harassment in various forms and teach employees how to handle it in an appropriate manner without endangering oneself and putting other passengers at risk. Bus conductors are trained to avoid direct confrontation and try to intervene and distract the perpetrators.

“It was almost ‘one fine day’ but then I felt his hand pressing [against me]; I felt so helpless,” said 38-year-old commuter Malee, referring to her experience one morning as she rode the bus to work. “This training should be able to help a lot of women commuters, old and young.”

The BMTA has identified seven forms of sexual harassment that takes place on public buses, which include inappropriate touching, indecent exposure, staring and pestering. Such harassment is more likely when buses are congested. Passengers are also being encouraged to be vigilant of such incidents and intervene. 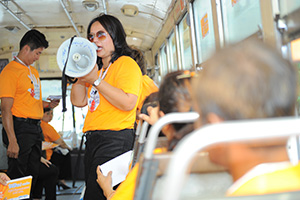 Serving three million commuters per day, the BMTA has provided training to its staff for a better understanding of sexual harassment and techniques to address the problem. Photo: UN Women/KithandKin/Pornvit Visitoran

“As a result of this outreach, bus drivers and conductors, who are at the frontlines, will be better-equipped with deeper understanding and practical techniques to ensure safety of all women travellers,” said Opas Petchmunee, Director of the BMTA.

The project has been implemented to commemorate the International Day for the Elimination of Violence against Women in support of the UN Secretary-General’s UNiTE Campaign, which aims to engage all sectors of society to join hands and say no to violence against women.

Ending violence against women and girls is one of the main priorities of UN Women. “Ensuring that public spaces are safe is especially important for women’s access to their human rights,” said Roberta Clarke, Regional Director of UN Women Regional Office for Asia and the Pacific and Representative in Thailand.