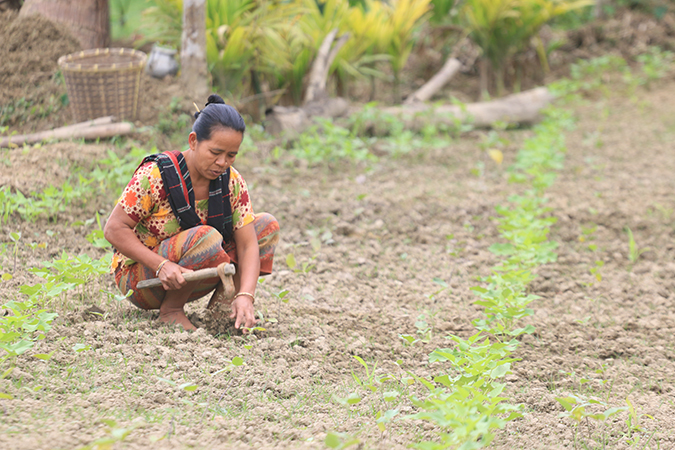 Bojjropodi Chakma, 44, started a successful garden after the landslide. Now, her garden not only helps her bring in income for the household, but also helps in supplementing her family’s nutritional needs.. Photo: UN Women/Jewel Chakma

The Chittagong Hill Tracts area in southeastern Bangladesh is prone to natural disasters. The resulting displacement of local tribal people has spurred many conflicts in the past. On 13 June 2017, heavy rains triggered the deadliest landslide in the area to date, killing at least 160 and injuring hundreds more.

Thirty-five-year-old Rahima Khatun survived the landslide, but lost her home and her livestock—her only source of income. She didn’t know where to go for assistance. In September, Khatun heard about Green Hill, a local organization providing disaster response in Rangamti and Bandarban districts, funded by UN Women, and approached them for assistance. Through Green Hill, she learned how to prepare for disasters to mitigate their risks, and about her own rights. She also received skills training in sustainable agriculture and livestock management. “I never believed that without any lobbying I could get a grant support so easily,” said Khatun. 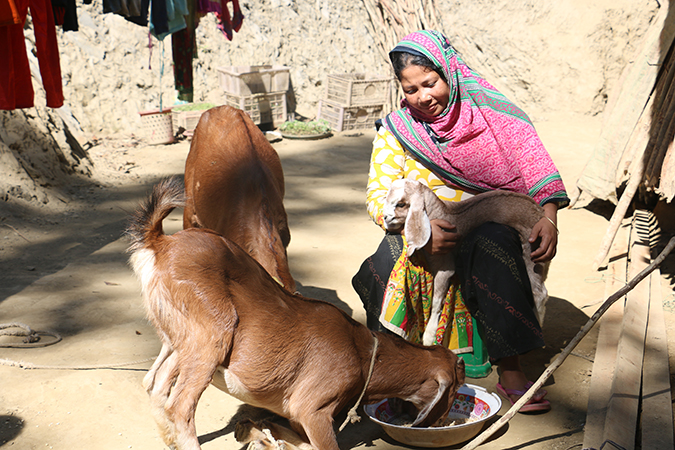 In the June 2017 landslides in southeastern Bangladesh, Rahima Khatun but lost her home and her livestock—her only source of income. She was able to purchase new goats after receiving a grant. Photo: UN Women/Jewel Chakma

Khatun received two cash grants of BDT 4,000 and BDT 12,000, with which she repaired her home and bought two goats. She is planning to invest her profits to buy a cow next year, which will provide her with more milk and income. Meeting and sharing experiences with other women who had also survived losses helped Khatun regain her own confidence.

For Green Hill and UN Women, this is what effective and gender-responsive humanitarian action looks like—solutions that were designed with direct inputs from the communities impacted, to provide women with the means to recover from crises, enabling them to meet their immediate needs and empowering them to cope better when disaster strikes. 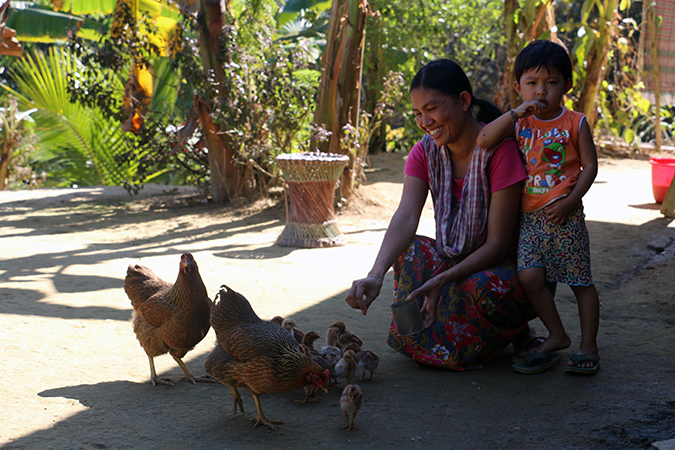 Today, Bojjropodi Chakma, 44, is a successful entrepreneur and a gardener. She is also the breadwinner of her family. Prior to the landslide in 2017, Chakma was barely able to make ends meet; after the landslide, she was left with nothing. Her property was damaged extensively and livelihood prospects were destroyed. She too received financial assistance and livelihood training through the Green Hill project.

Chakma started a winter garden around her house where she now grows eggplant, tomato, sweet potato, corn and many other seasonal vegetables. The garden not only helps her bring in income for the household, but also helps in supplementing her family’s nutritional needs. Chakma says, “I will show people, how women can be successful entrepreneurs despite of the many challenges we face—even women from minority groups”.

Chakma has also learned to weave handloom products that she sells to local buyers. Her dream is to set up her own weaving production house that will supply directly to local buyers. She is saving money to hire more people to expand her handloom operation. 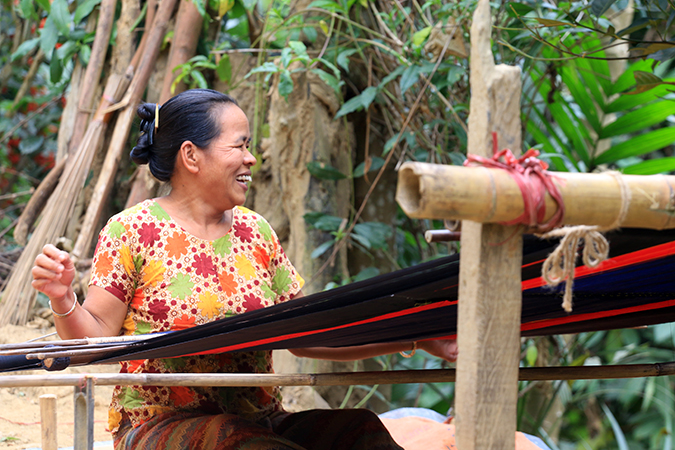 According to Dilruba Haider, Programme Specialist with UN Women in Bangladesh, “all the project beneficiaries of this disaster response project were the poorest of poor and most marginalized women within the community. This is what leaving no one behind looks like. The project supported these women in setting up bank accounts, learning how to manage their own finances for the first time, and trained them to start income generating activities to regain financial stability.”

Today, more 25 per cent of the beneficiaries have already secured small savings ranging from 3,000 – 5,000 BDT. Having access to small savings and diversified sources of income are ways to build resilience against future risk. 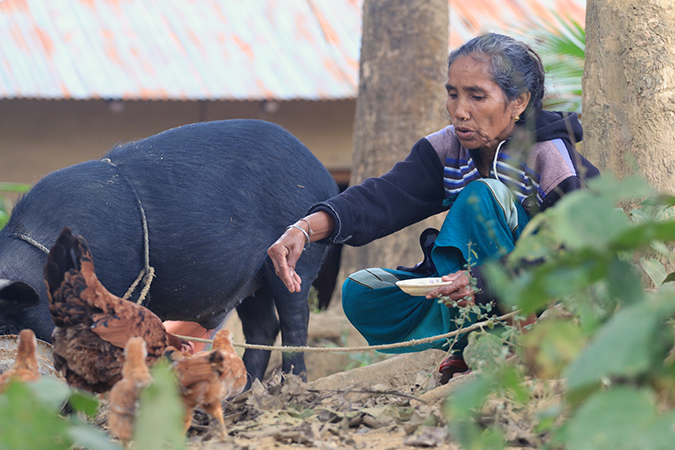 Kalabi Chakma, 42 years old, lost her husband in the 2017 landslide. With the help of the financial grants she received, she has is raising pigs and chickens and saving money for the future. Photo: UN Women/Jewel Chakma

The livelihood skills training came along with knowledge and awareness of gender equality and disaster preparedness. As a result, 95 per cent of the beneficiaries have developed their own protection plans. Chakma, for instance, is moving to a safer location and stores dried food items and some cash at home. In fact, she has a backpack ready with all her important documents that she can grab and run quickly, in case of emergencies.