From where I stand: “Forgiveness is still very far from our reality”

Rosalina Tuyuc Velásquez, a Guatemalan human rights activist, has never given up looking for truth and justice, since her father and husband were disappeared during the Guatemalan civil war. After her father and husband were kidnapped and murdered by government forces during the Guatemalan civil war, she founded the National Association of Guatemalan Widows (CONAVIGUA). It is now a leading national human rights organisation. In 1995, she was elected as a Congressional deputy, and in 2004 she chaired the National Reparations Commission to investigate crimes committed during the civil war, which raged for over three decades. 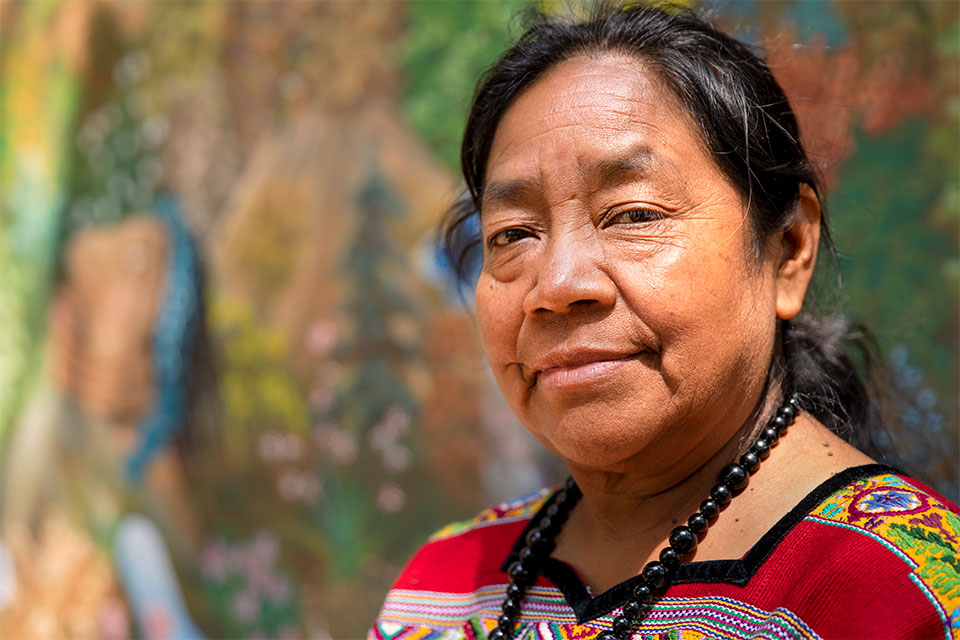 I was only 26 years old when they took my father away.  He disappeared in 1982 during the regime of José Efraín Ríos Montt, when tens of thousands of indigenous people were kidnapped, tortured, raped and murdered.

Three years after my father disappeared, my husband was also kidnapped by government forces.  After he was taken, I looked everywhere for him, in the prisons, in the hospitals, but he was gone.

I felt like I couldn’t take any more suffering. Yet from this pain, I found strength: I looked death in the face and realized I wasn’t afraid anymore.  I had felt so alone, but then I looked around me and saw all the other women who were also grieving and searching for their loved ones.  We saw our community being destroyed and the violence growing; even our young girls were being raped.  In 1988, I helped found the National Association of Guatemalan Widows (CONAVIGUA) to seek justice and peaceful resistance to the violence.

Brave women came forward and joined us and we discovered that there is power in numbers.  Alone we could be terrorized and ignored, but through CONAVIGUA, we mobilized.  We won support from the unions, we taught ourselves how to use the law and how to speak in public.

More than 30 years later, the path to justice is still roadblocked by impunity and corruption. Despite the thousands of deaths, only a few cases have ever reached the courts.

All my life, I have noticed that women are always being asked to forgive.  What happened was a genocide, yet we have repeatedly been told that the justice process relies on us accepting amnesty for those who inflicted death on our families.

I have witnessed the strength of women to face and transcend fear, to speak outand to seek justice. While all around us the world may be full of violence and uncertainty, the voices and the hearts of women are weapons for breaking impunity.”

Rosalina Tuyuc Velásquez is the founder of the National Association of Guatemalan Widows (CONAVIGUA), a grassroots organization that UN Women supports.  In 1995, she was elected as a Congressional deputy, and in 2004 she chaired the National Reparations Commission to investigate crimes committed during the 36-year-long armed conflict in Guatemala. Ms. Tuyuc Velásquez spoke to UN Women recently, on the occasion of the 20th anniversary of the UN Security Council resolution 1325, which continues to shape the agenda for women, peace and security, to include women and gender analysis in all aspects of conflict prevention, peace and reconstruction. Critical to the agenda, are women peace leaders gaining and exercising decision-making power.

To read her full story, see Photo essay: A house of art and memories seeks to bring closure in Guatemala

Related News
20/04/2019
From where I stand: “Just the act of wearing our traditional clothes is an expression of resistance”
30/10/2018
Take five: “A successful peace process simply demands the active and meaningful participation of women at all levels”
19/10/2018
Sepur Zarco case: The Guatemalan women who rose for justice in a war-torn nation
03/05/2018
Take five: “A feminist in decision-making roles makes a difference”
22/10/2017
Sepur Zarco: In pursuit of truth, justice, and now reparations
END_OF_DOCUMENT_TOKEN_TO_BE_REPLACED