Gender equality and the UN General Assembly: Facts and history to know

The UN General Assembly (UNGA) is the world’s largest yearly meeting of world leaders. It’s an action-packed week of deliberations, speeches, side events and even celebrity sightings.

While UNGA has been the setting for several historic moments for gender equality, much is still to be achieved regarding women’s representation and participation.

Just four women have been elected President of UNGA in its 76 years, and only 24 of the 193 Member States represented currently have a woman Head of State or Government. The United Nations has never had a woman Secretary-General.

Ahead of the 76th UNGA session (14 – 28 September 2021), we take a look at the history of gender equality and the General Assembly.

UNGA 76 will center around the theme, "Building resilience through hope - to recover from COVID-19, rebuild sustainability, respond to the needs of the planet, respect the rights of people, and revitalize the United Nations". Because the impacts of crises are never gender-neutral, and COVID-19 is no exception, Member States must act deliberately to counter the disproportionate effects of the pandemic for women as they consider how to recover and build resilience from COVID-19.

In 2020, for the first time ever, the UNGA was held virtually because of the COVID-19 pandemic. With emerging data and reports on the increase of all types of violence against women and girls, particularly domestic violence, the Secretary-General called for commitment and resources from governments to end this "hidden war on women".

We must stamp out the horrifying increase in violence against women & girls during the #COVID19 pandemic.

This is a hidden war on women.

Preventing & ending it requires the same commitment & resources devoted to other forms of warfare.#UNGA https://t.co/LMUAzjZ0sC pic.twitter.com/EaDxo6cFE8

The 75th session of UNGA came a quarter century after the adoption of the landmark Beijing Declaration and Platform for Action of 1995, a comprehensive blueprint for women’s rights and gender equality around the world. The session marked the 25th anniversary of the Beijing Declaration and Platform for Action with a high-level event where world leaders presented actions to accelerate the full realization of gender equality.

On 23 September 2019, Greta Thunberg addressed the assembled world leaders at the 2019 UN Climate Action Summit held in New York City ahead of the high-level General Debate.

For the first time in its history, the United Nations had achieved gender parity among its senior leaders during the 73rd UNGA session.

This year, for the 1st time in history, the @UN has achieved gender parity among its senior leaders. The #TimeIsNow for equality across the whole system!pic.twitter.com/DzVcPLntLD

María Fernanda Espinosa Garcés became only the fourth woman in the 73-year history of the United Nations to be elected President of the General Assembly. 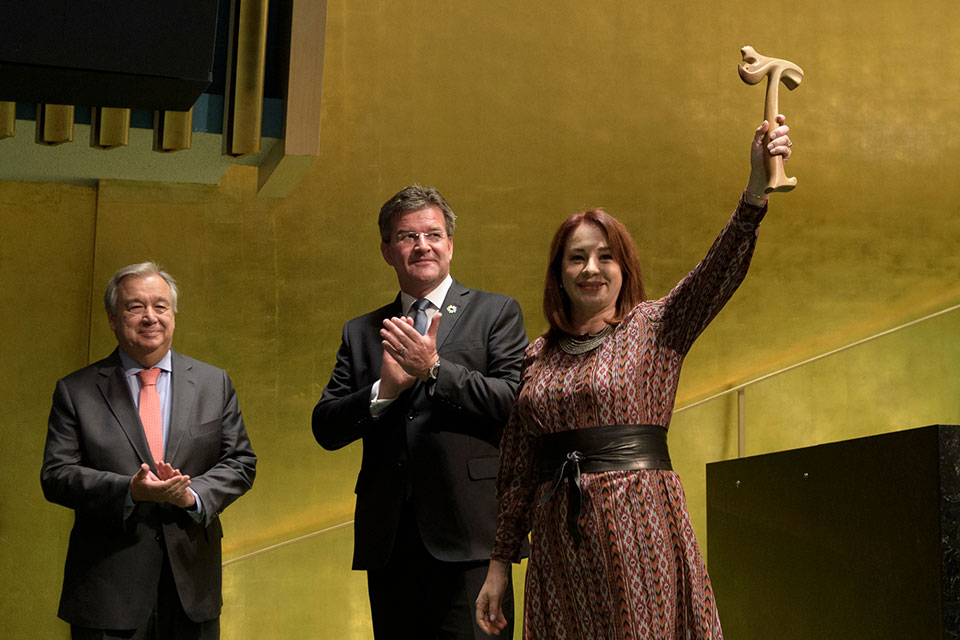 Prime Minister of New Zealand Jacinda Ardern made history during the high-level General Debate as the first female world leader to attend UNGA with her baby in tow.

The European Union and the United Nations launched a Spotlight Initiative to eliminate all forms of violence against women and girls.

The Global Goals World Cup, an all-women football tournament, took place to promote the power of sport to advance gender equality and change the world.

UN Women launched its flagship programme initiative, Making Every Woman and Girl Count, which seeks to bring about a radical shift in how gender statistics are used, created and promoted.

While SDG 5 is specifically dedicated to achieving gender equality and empowering all women and girls, nearly all the goals include gender-specific targets. Only by ensuring the rights of women and girls across all the goals will we get to justice and inclusion, economies that work for all, and sustaining our shared environment now and for future generations.

For many years, the United Nations faced serious challenges in its efforts to promote gender equality globally, including inadequate funding and no single recognized driver to direct UN activities on gender equality issues.

In July 2010, UNGA created UN Women, the United Nations Entity for Gender Equality and the Empowerment of Women, to address such challenges.

In doing so, UN Member States took an historic step in accelerating the organization’s goals on gender equality and the empowerment of women. 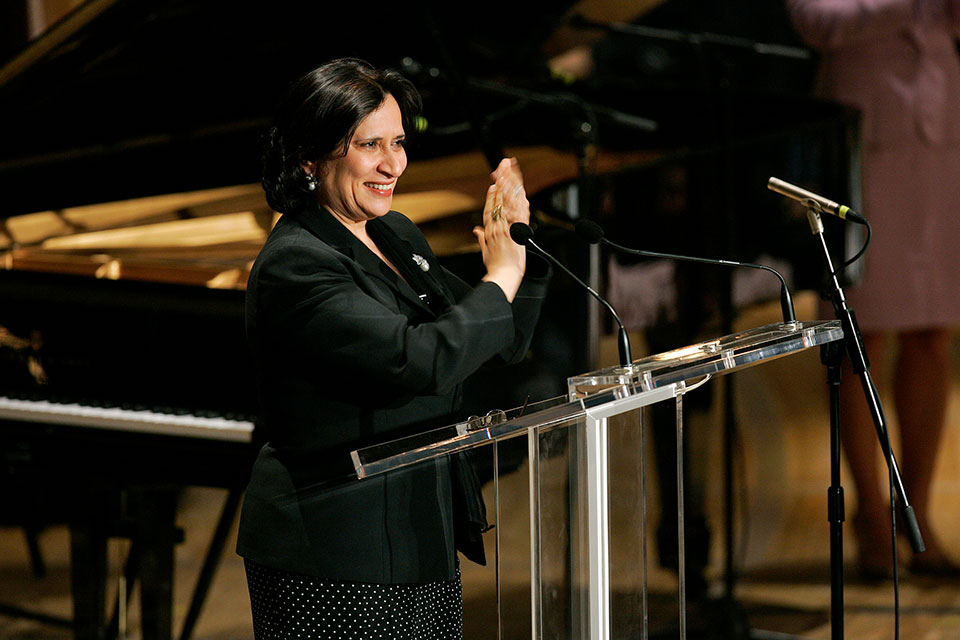 President of the General Assembly, Sheikha Haya Rashed Al Khalifa at a concert in the general assembly hall, in May 2007. Photo: UN Photo/Ryan Brown

Sheikha Haya Rashed Al Khalifa of Bahrain was the President of the sixty-first General Assembly, the first woman to hold the position since 1969 and only the third woman since the founding of the United Nations. 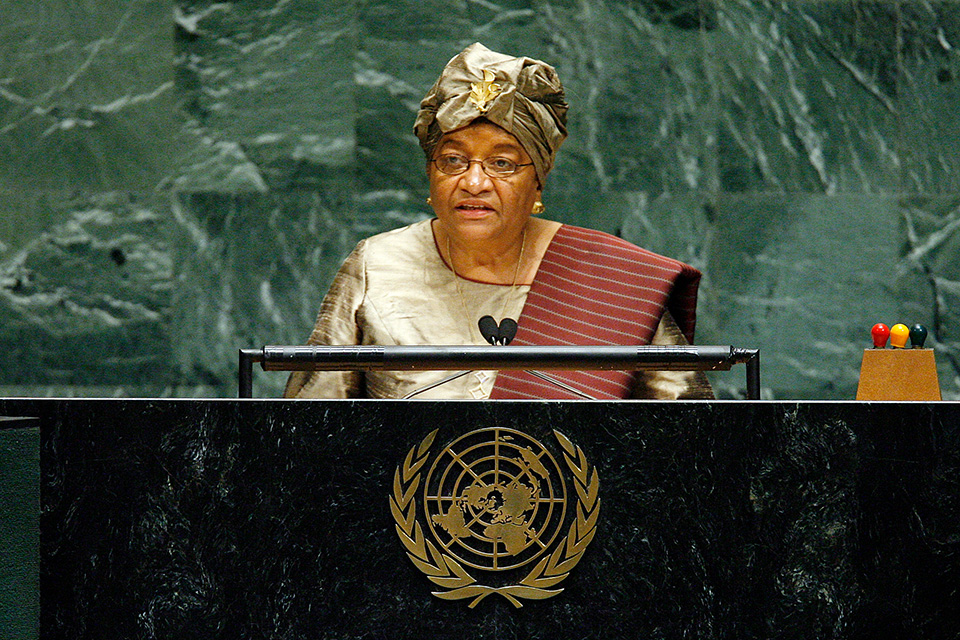 Ellen Johnson-Sirleaf, President of the Republic of Liberia, addresses the general debate of the 61st session of the General Assembly, at UN Headquarters in New York. Photo: UN Photo/Marco Castro 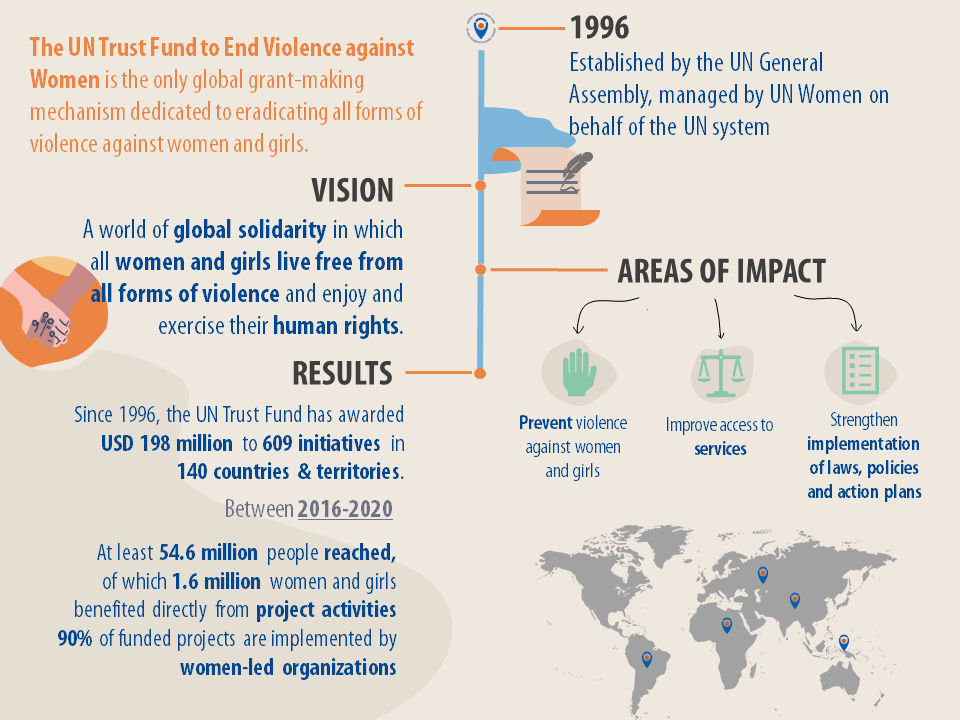 The UN Trust Fund to End Violence against Women (UN Trust Fund) was established by General Assembly Resolution 50/166 in 1996 as a direct response to the Beijing Declaration and Platform for Action.

Managed by UN Women on behalf of the UN system, the UN Trust Fund is the only global multi-lateral grant-making mechanism exclusively dedicated to eradicating all forms of violence against women and girls. Since its establishment 25 years ago, the UN Trust Fund has awarded USD 198 million to 609 initiatives in 140 countries and territories. 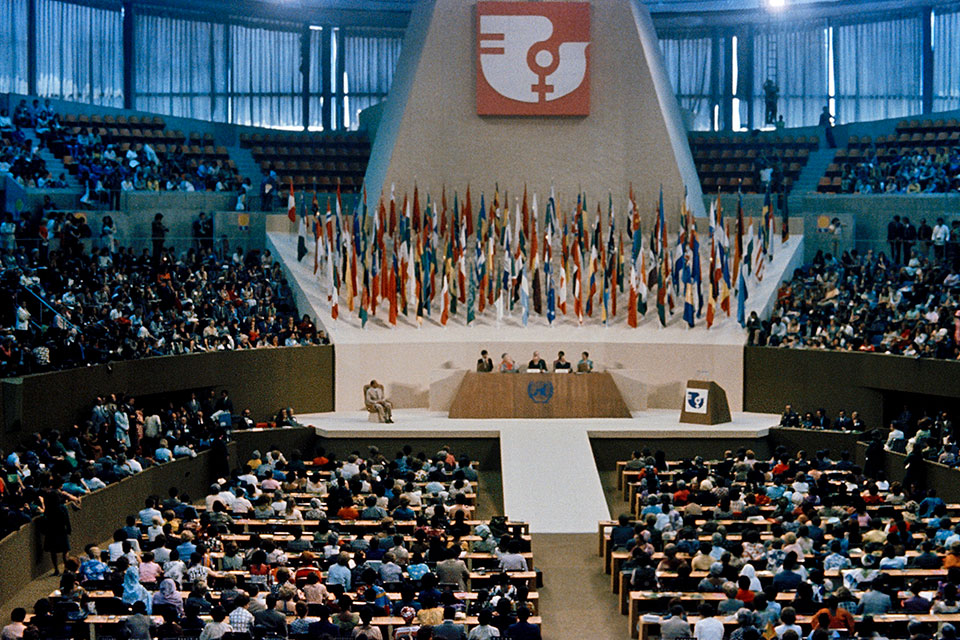 The World Conference of the International Women's Year opened at the Juan de la Barrera Gymnasium in Mexico City on 19 June 1975 with 110 delegations represented at the opening session, with women delegates outnumbering the men by about six to one. Photo: UN Photo/B Lane

International Women’s Year was endorsed by the General Assembly to draw attention to women’s equality with men and to their contributions to development and peace. 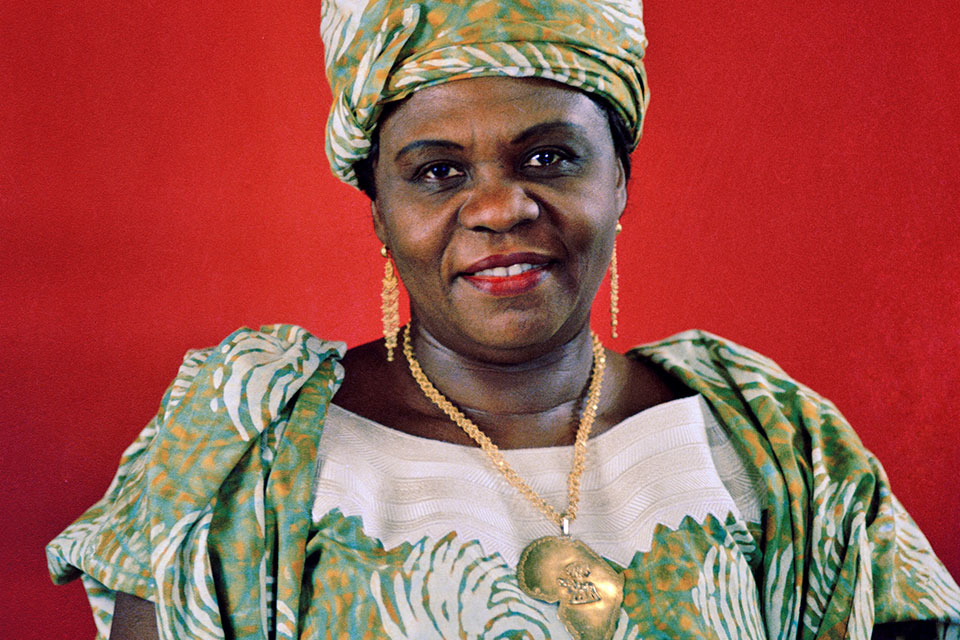 Efforts to consolidate standards on women’s rights led the 18th General Assembly to request the Commission to draft a Declaration on the Elimination of Discrimination against Women, which the Assembly ultimately adopted in 1967. 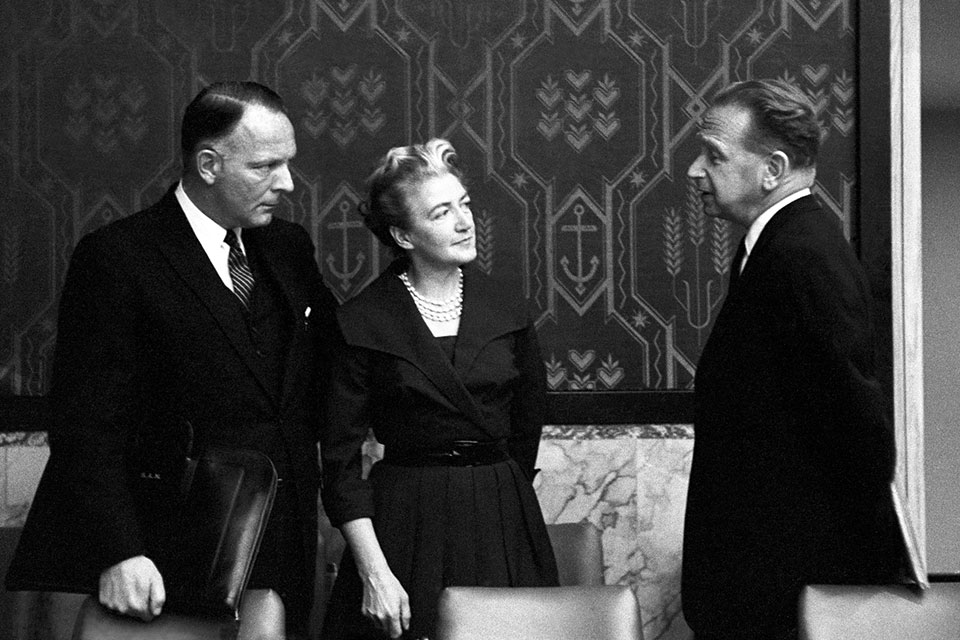 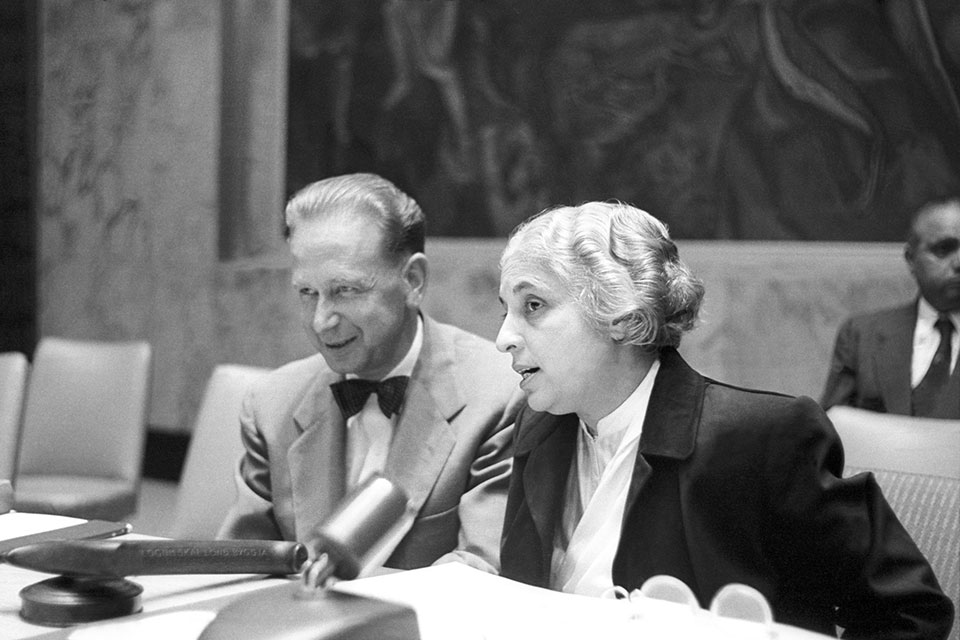 Vijaya Lakshmi Pandit from India became the first woman to be elected President of the General Assembly. 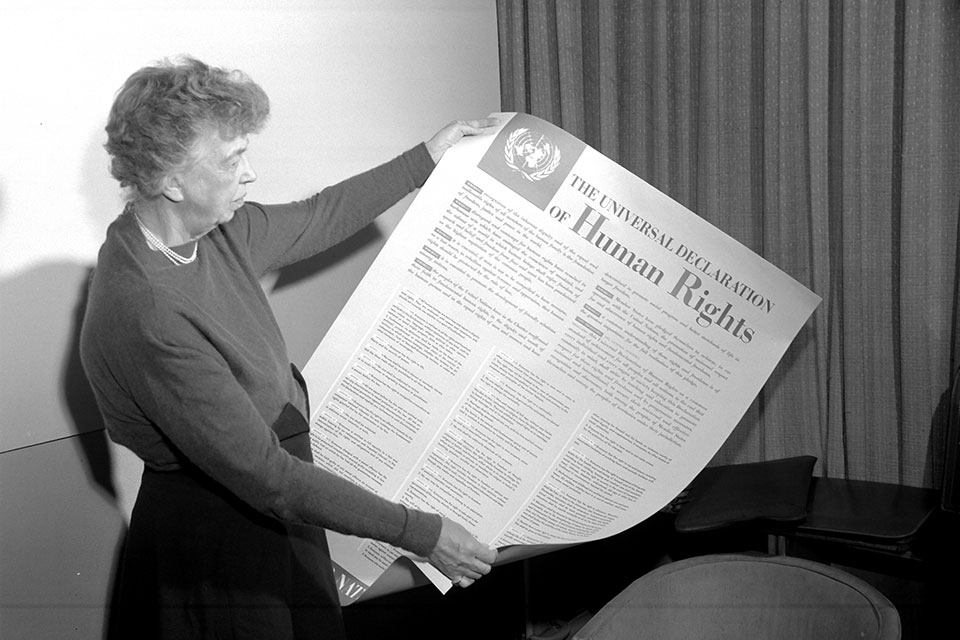 Gender equality was made part of international human rights law by the Universal Declaration of Human Rights, which was adopted by the General Assembly on 10 December 1948.

Eleanor Roosevelt was the Chairperson of the drafting committee of the Universal Declaration of Human Rights, and Hansa Mehta of India was the only other female delegate. Mehta succeeded in changing “All men are born free and equal” in Article 1 of Universal Declaration of Human Rights to, “All human beings are born free and equal".

1946 (The first session of the UN General Assembly)

The first session of the UN General Assembly opened on 10 January 1946 at Central Hall in London, United Kingdom. During the inaugural session, Eleanor Roosevelt called a meeting of women delegates and famously read an "open letter to the women of the world", urging for their increased involvement in national and international affairs. 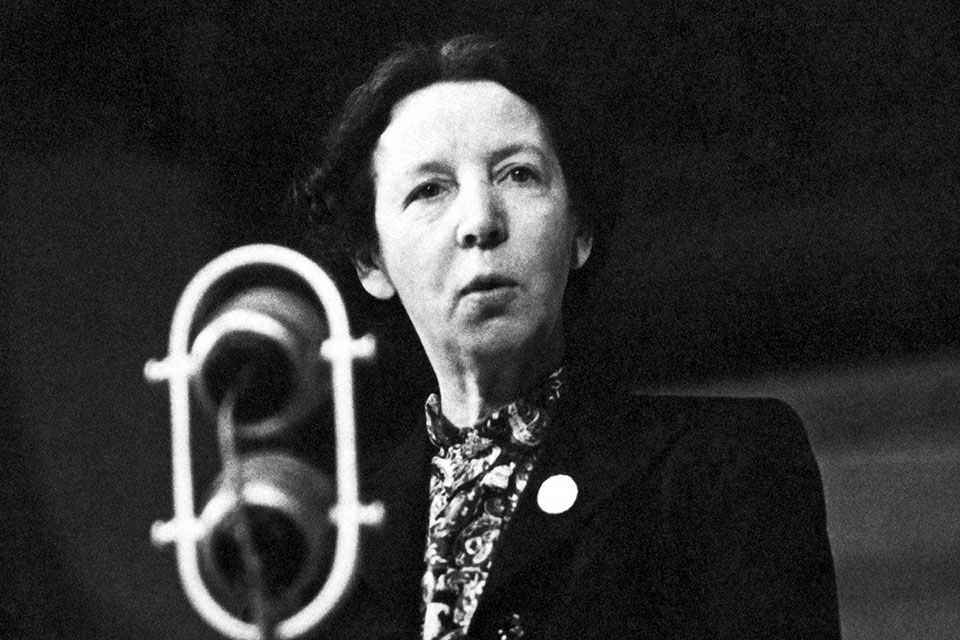 Frieda Dalen, Alternate Delegate of Norway and Rapporteuse of the Social, Humanitarian and Cultural Committee, addresses the first session of the General Assembly of the United Nations. Photo: UN Photo/VH

Norway's Frieda Dalen was the first woman to ever address the General Assembly.

“We the peoples…reaffirm faith…in the equal rights of men and women”.

When the representatives of 50 Allied states got together in San Francisco to create a new international organisation, the governments of these states were nearly completely male-dominated. In fact, women had equal voting rights with men in only 30 of the countries present. Female ministers were practically non-existent, only one country had a woman Head of State (a hereditary, mainly ceremonial position), and in the 26 parliaments that existed at the time, only three percent of the members were women. 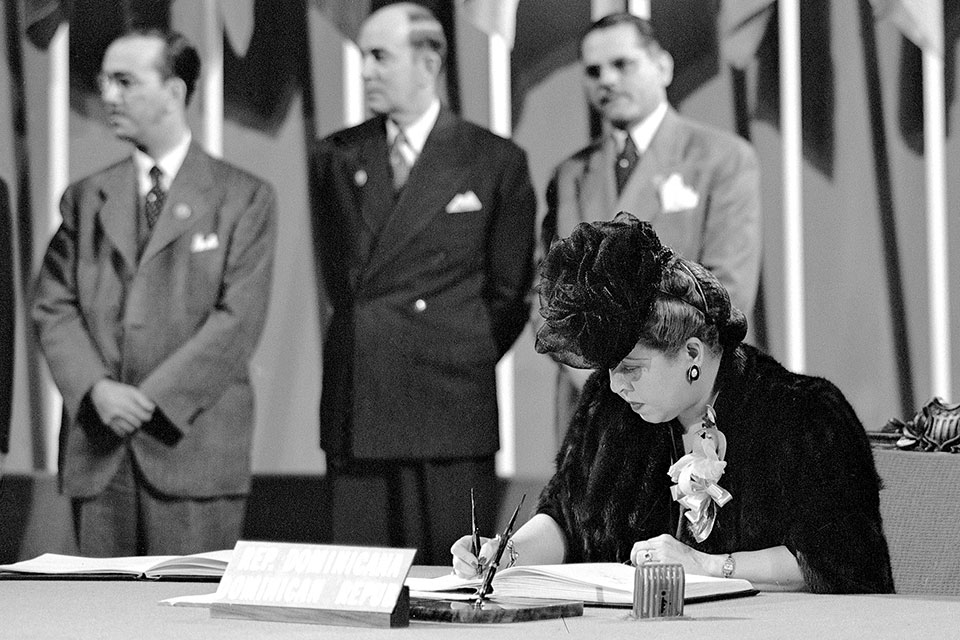 Minerva Bernardino, President, Inter-American Commission of Women, member of the Delegation from the Dominican Republic, signing the United Nations Charter at a ceremony held at the Veterans' War Memorial Building in San Francisco, California on 26 June 1945. Photo: UN Photo

There were only eight women among the 800 delegates who were present for the signing of the UN Charter, the founding document of the organisation. One of these women was Australian delegate Jessie Street who ensured that respect for human rights and for fundamental freedoms for all without distinction included sex, as well as race, language, or religion.

Of the 160 signatories, only four were women—Minerva Bernardino (Dominican Republic), Virginia Gildersleeve (United States), Bertha Lutz (Brazil), and Wu Yi-fang (China)—but they succeeded in inscribing women’s rights in the Charter of the United Nations, which became the first international agreement to proclaim the equal rights of men and women as part of fundamental human rights.

Related News
14/11/2017
Standing up for survivors in the Shari’a court every day: Ayah al-Wakil is determined to leave no woman behind
03/03/2014
In the words of Tsitina Xavante: My father told me ‘I want you to be able to help your people one day’
03/03/2014
Mayan women build integrated pathway for violence survivors in Mexico
26/03/2021
Press Release: UN’s largest gathering on women’s rights delivers robust blueprint on strengthening women’s leadership and participation in public life
15/03/2021
Press Release: UN’s largest gathering on women’s rights calls on enhancing women’s leadership in public life in the run up to the 2021 Generation Equality Forum
END_OF_DOCUMENT_TOKEN_TO_BE_REPLACED