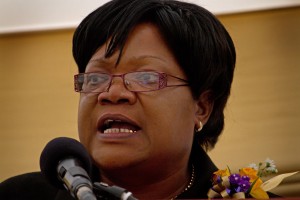 Women from across Zimbabwe have celebrated the launch of a strategic high-level women's coalition. The voluntary group will lobby to ensure that the new constitution, currently being drafted, will deliver on gender equality and empowerment for women in the country.

The Group of 20 (G-20) was formally launched on 13 April in Harare and includes 20 well known public figures, including women academics and activists, and representatives from the national machinery, the women's parliamentary caucus and the Constitution Select Committee (COPAC).

In her keynote address at the launch, Zimbabwean Vice-President, Joice T.R. Mujuru, observed that “the G-20 is strategically positioned to provide feedback to the broader population of women, and that it demonstrates women's willingness to work together for a unified Zimbabwe."

The G-20 was first formed in 2011 with support from UN Women and the United Nations Development Program. It monitors the constitution-making process to make sure that it clearly reflects the priorities of women, as gathered during outreach meetings. From these, the group has formulated principles that range from the need to better protect women's socio-economic rights and right to security, to strengthening affirmative action. The principles also call for better access to resources through gender-sensitive public financing, and for a legislated quota of 50/50 representation of women in all decision-making.

Zimbabwe's current electoral system is “First Past the Post, and there is no legislated quota to help increase women's political representation". Women make up just 17.9 per cent of parliament, 18.5 per cent of local government councilors and 17.1 per cent of the Cabinet, which falls far below the 30 per cent target set by the Beijing Platform for Action in 1995 at the Fourth World Conference on Women. The Zimbabwe government has also ratified the Southern African Development Community Gender Protocol, which commits to achieving a 50-50 balance of men and women in decision-making positions in the public and private sectors by 2015.

The G-20 has already successfully lobbied to include certain issues in the draft constitution, said Priscilla Misihairabwi-Mushonga, a COPAC member, and Zimbabwe's Minister of Regional Integration and International Cooperation. However, “the battleground is still around the quota system and numbers, and the electoral system, she added.

“The Group of 20, and the many others who have supported this endeavor, have been tirelessly working to ensure that the constitution-making process is not a missed opportunity, said UN Women Zimbabwe Country Programme Representative, Hodan Addou, at the launch event. “The women of Zimbabwe have seized this opportunity to ensure that Zimbabwe's foundational legal document reflect its people's commitment to the notion of true equality, and a society that nurtures and supports each individual's ability to reach her or his full potential.

Zimbabwe began its current constitution-making process in 2009 with outreach programmes to gather citizens' views. The drafting began in December 2011. The draft constitution will be presented at a conference and debated in Parliament, before a constitutional referendum, which is expected by the end of the year.