Ensuring that women have better access to, and control of, natural resources such as land, water, forests and minerals can improve the chances of long-term peace and recovery in war-torn countries, according to a new report released by the United Nations today. 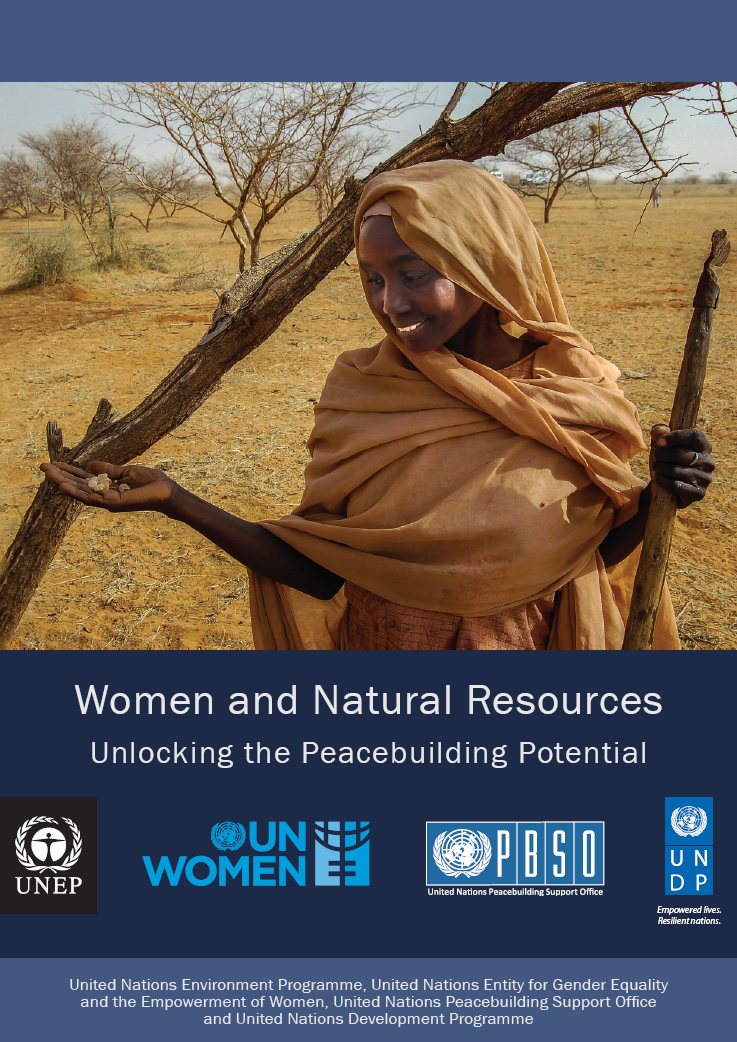 Women in conflict-affected countries are often primarily responsible for meeting the water, food and energy needs of households and communities. Many women are also active in forestry and artisanal mining – in Sierra Leone, for example, it is estimated that up to 90 per cent of small-scale gold prospectors in some areas are women. As such, they play a critical role in the use and management of natural resources, says the report.

Despite this, women remain largely excluded from owning land, benefiting from resource wealth or participating in decision-making about resource management in peacebuilding settings. This exclusion often extends to negotiations over the way that natural resources are allocated following a peace deal, with the result that women’s specific needs are rarely met during the peacebuilding process. For instance, the peace agreements in Timor-Leste and Bougainville did not include any provisions on women’s access and rights to land, exacerbating land-related vulnerabilities for many groups of women and ultimately undermining their recovery.

“At a practical level, women form the majority of resource users and managers in peacebuilding settings, but this responsibility seldom translates to the political or economic levels. This has to change,” said Achim Steiner UN Under-Secretary-General and UNEP Executive Director. “Peace and development can only be achieved when both men and women access and benefit from natural resources in an equitable and sustainable way.”

Women are also insufficiently targeted in post-conflict recovery programmes that aim to support natural resource-based livelihoods and small businesses, such as agriculture. In Aceh, funding for economic recovery in the first five years following the conflict was primarily focused on the promotion of traditionally male-dominated commercial crops such as rice, palm oil and coffee, rather than the food crops grown by women. As a result, women were largely excluded from receiving any benefits.

Women bear the brunt of conflicts in many ways. They often have to become the sole caretakers of their families and communities and are agents of peace and recovery,” said Phumzile Mlambo-Ngcuka Under-Secretary-General and UN Women Executive Director. “Sustainable natural resource use is the cornerstone of development. Women’s full participation, and access to natural resources, are urgent priorities for rebuilding peaceful societies.”

The report contends that failing to seize the opportunity presented by women’s roles in natural resource management can perpetuate inequity and undermine recovery from conflict, as women have untapped potential as engines of economic revitalization.

The report cites research by FAO that shows that giving women farmers the same access to assets and finance as men could help increase yields on their farms by 20 to 30 per cent. In conflict-affected countries, where women’s roles in agriculture tend to expand, this could raise total agricultural output and significantly strengthen recovery and food security.

“Natural resources, such as mineral wealth, have the potential to provide significant sustainable employment opportunities for women in conflict-affected settings,” stated Jordan Ryan, Assistant Administrator and Director, Bureau for Crisis Prevention and Recovery, UNDP. “However, in reality, women are frequently unable to take advantage of such opportunities. Barriers that prevent women from accessing the benefits of these resources, such as low-literacy rates, marginalization and limited mobility need to be addressed.”

Women in conflict-affected settings also routinely experience physical insecurity when carrying out daily tasks linked to natural resources. In Darfur, for example, women and girls have been subjected to rape, harassment and other forms of violence when they have left refugee and IDP camps to collect such essential resources as firewood and water. This risk has been exacerbated by environmental degradation, which has forced women to travel longer distances – three to six miles or more, three to five times a week – to find a single tree.

The report urges governments and the international community to invest in the political and economic engagement of women in natural resource management and to end the entrenched discrimination that women face in accessing, owning and using critical natural resources in sustainable and productive ways.

“Women continue to be disenfranchised across the globe particularly in countries that have endured violent conflict,” said Judy Cheng-Hopkins, Assistant Secretary-General, United Nations Peacebuilding Support Office. “This research shows that when women have a seat at the table and their concerns are taken into account in the management of natural resources, the impacts on families, communities and peace are positive and significant.”

The full report and other resources can be downloaded here.

The report was developed through a partnership of four UN agencies – UNEP, UN Women, UNDP and PBSO – and benefited from the inputs and contributions of some 45 experts and field practitioners. An extensive peer review process involving more than 20 leading experts in the fields of gender, natural resources and peacebuilding from the UN, international and national NGOs and academic institutions was conducted as well.

The research was financed by the Governments of Finland, Spain, Sweden, the UK and the Republic of Korea.

In declaring 6 November of each year as the International Day, the UN General Assembly aimed to draw attention to the fact that damage to the environment during armed conflict impairs ecosystems and natural resources long after the period of the conflict, and extends beyond the limits of national territories and the present generation.
For more information, see: https://www.un.org/en/events/environmentconflictday

Related News
10/09/2019
In the Bolivian Amazon, women are protecting the forest and empowering themselves
01/02/2019
From where I stand: “I want to get involved in decision making in my community”
15/01/2013
Pooling resources for local development: Tanzanian women take matters into their own hands
14/11/2022
Speech: Focus on gender equality as central to climate action with concrete solutions
14/10/2022
Statement: Rural women confronting the global cost-of-living crisis
END_OF_DOCUMENT_TOKEN_TO_BE_REPLACED