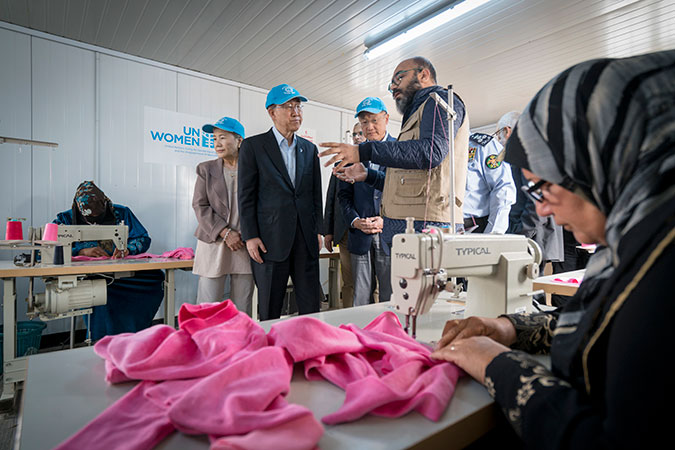 United Nations Secretary-General Ban Ki-moon and World Bank Group President Jim Yong Kim visited Jordan’s Za’atari refugee camp on 27 March, accompanied by a delegation of senior UN officials. The delegation first stopped by one of the women centres run by UN Women, known as the “Oases”, underlining the United Nations’ commitment to respond to the needs and aspirations of women and girls in humanitarian assistance.

As the world prepares for the first-ever World Humanitarian Summit next May in Istanbul, the question of strengthening gender equality in humanitarian work is increasingly drawing attention from the international community as shown in the recent Secretary-General’s report, One Humanity: Shared Responsibility, and in the agreed conclusions of the 60th Commission on the Status of Women.

“This is, again, a very moving place for me. I’m able to see all sorts of life here: schools, restaurants, art galleries and places where people are taught vocational training. This is a sign of resilience,” said Mr. Ban during today’s visit, “But let them be able to return to their home country. That is what the United Nations is doing and we are going to discuss this matter, most importantly, in Istanbul in May during the World Humanitarian Summit.” 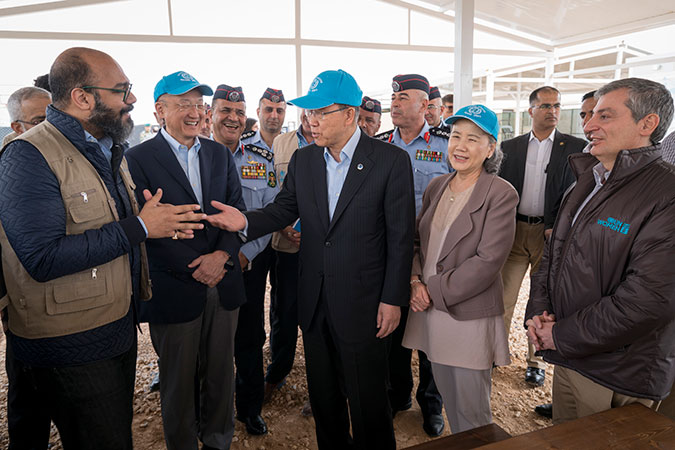 The Arab Region is home to three of the worst humanitarian crises at the global level: in Syria, Iraq and Yemen. March 2016 marked the fifth anniversary of the beginning of the Syrian crisis, which has turned Syria into the largest source of refugees today. Women continue to represent more than half of the Syrian refugee population in the region. In Za’atari refugee camp, women and children constitute 80 per cent of the refugee community.

“Women’s greatest challenge here is isolation—the isolation associated with gender inequalities which perpetuate women’s hindered access to public space, unequal access to jobs, and confinement to their caravans,” said Mohammad Naciri, UN Women’s Regional Director for Arab States. “Our centres offer an opportunity to break this cycle of isolation while also providing an opportunity to serve as breadwinners within their households.” 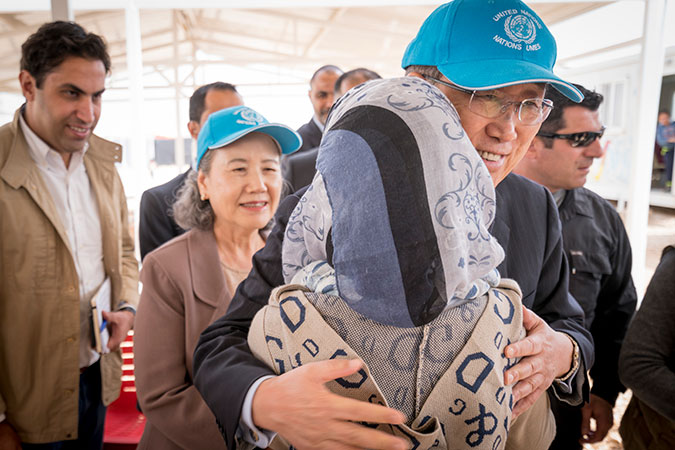 During their visit, Mr. Ban and Mr. Kim met with Zaad Al Khair, a 17-year-old Syrian refugee who shared her experience, including the fear that prompted her to flee Syria as well as the hope of building a new life in Za’atari. She spoke about her life dream of becoming a UN translator one day, and she spoke in English—a language she learned in a class at one of UN Women’s centres.

“I used to have many friends; my life was full of love and joy. We had to leave everything behind out of fear,” said Ms. Khair. “In the camp, I went back to school and started to build new friendships. I learned English because I want to be a translator, because one day I want to tell the world what happened in Syria.”

UN Women’s humanitarian work is focused on the principle of restoring the dignity of refugee women through economic opportunities as an entry point for gender equality and the prevention of sexual and gender-based violence. In Za’atari camp, UN Women runs three safe spaces serving 16,000 refugees every year. Within the centres, UN Women operates the camp’s largest female-focused cash-for-work programme. Many of the programme’s beneficiaries are earning an income for the first time in their lives, which enables them to contribute to the family income. Around 70 per cent of these earnings are spent on diversifying family diets.

A recent study by UN Women on its humanitarian work in Jordan confirms that increasing women’s earning opportunities benefits them beyond economics, as it gives them decision-making power and a level of protection from violence. Long-term engagement in the programme was found to correlate with a 20 per cent decrease in the rate domestic violence, with the opportunity to leave the home stated as the primary reason for this reduction. 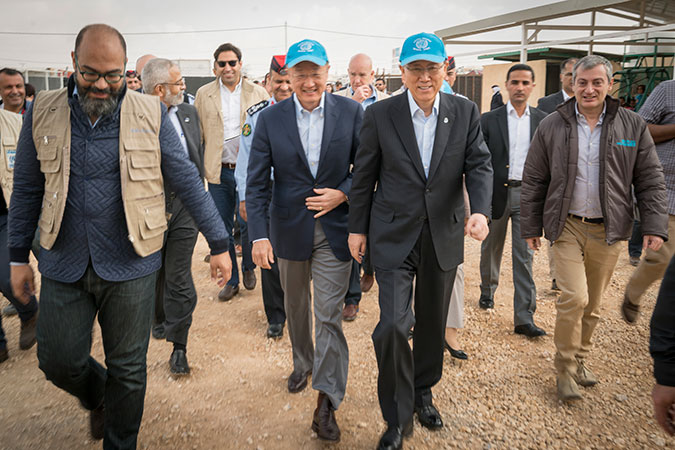 This story was cross-posted from the Regional Arab States website: http://arabstates.unwomen.org/en/news/stories/2016/3/unsg-visit

Related News
28/03/2017
From where I stand: “With every thread I wove…I was weaving away my sorrows”
20/06/2013
Syrian women refugees face forced early marriages and restricted mobility: UN Women report
16/04/2013
Syrian Women Refugees Stitch Together Trust and Hope
28/04/2020
Using technology to assist vulnerable Syrian refugees during COVID-19 lockdown
21/01/2019
In the words of Nur Omar: “I’ve healed the wounds of war and feel more confident about my future”
END_OF_DOCUMENT_TOKEN_TO_BE_REPLACED