Fifteen defining moments for women in 2019 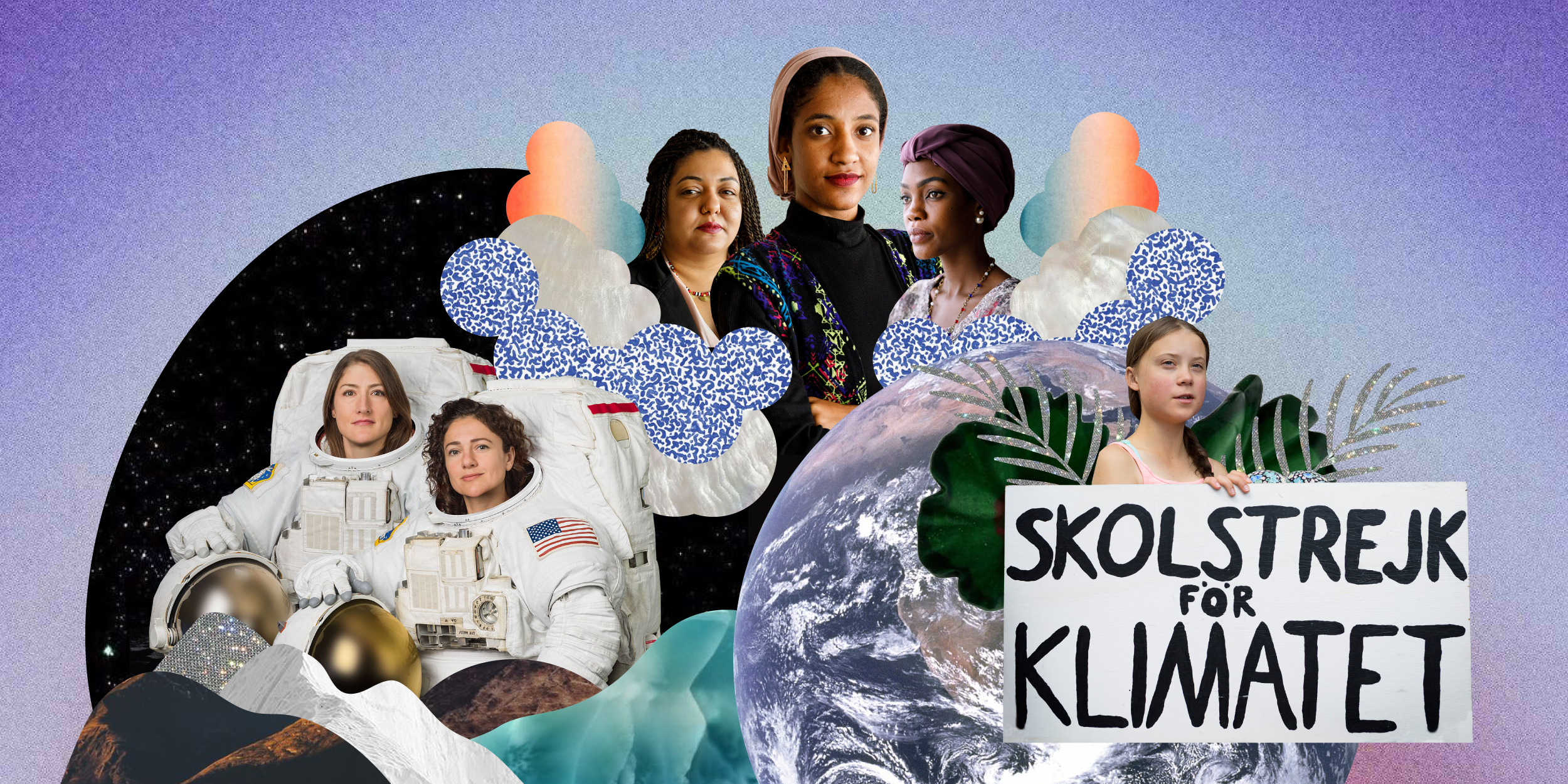 From the first all-woman spacewalk to Sudanese women leading the country’s revolution, the last 12 months have seen some incredible achievements by and for women.

Next year, 2020, is expected to be an even bigger year for women’s rights worldwide. It will mark several milestones, such as the 25th anniversary of the Beijing Platform for Action, the most progressive global agenda for women’s rights adopted by 189 countries in 1995, and five years since the adoption of the Sustainable Development Goals, among others.

As 2019 comes to an end, we’re taking a look back at some of the memorable moments for gender equality and women’s rights around the world.

NASA Astronauts Jessica Meir and Christina Koch took part in the first all-women spacewalk in October when they ventured out of the International Space Station to replace a power controller.

In March, a planned all-women spacewalk had to be postponed when the team realized NASA didn’t have two appropriately sized spacesuits [for women], indicative of the legacy of sexism that women in STEM fields face.

Let's chant until we close the gender pay gap:

After winning their fourth FIFA Women’s World Cup in July, the US Women’s National Team turned their attention to their off-the-field goals: Equal pay for work of equal value.

Leading up to the tournament, players filed a lawsuit demanding equal pay as compared to their male counterparts.

The US Women’s team has seen far more success than the men’s and has produced more revenue in the last two years, but still does not earn equally.

"If you choose to fail us, I say we will never forgive you."

Climate activist @GretaThunberg showed the power of a girl's voice in front of world leaders at the #ClimateAction Summit, ahead of the #UNGA.👏👏👏pic.twitter.com/8J1C6Wkv8X

Greta Thunberg, the 16-year-old activist from Sweden, became the face of a global movement for climate change in 2019. Thunberg’s movement started with her skipping school and camping out in front of the Swedish Parliament, demanding action to protect the planet for future generations, and grew to a global strike. In September 2019, Thunberg sailed across the Atlantic on an emissions-free boat to speak at the UN Climate Summit in New York, where she condemned world leaders for their lack of action.

“You all come to us young people for hope. How dare you?” she said. “You have stolen my dreams and my childhood with your empty words, and yet, I’m one of the lucky ones. People are suffering. People are dying. Entire ecosystems are collapsing.”

4. Esther Duflo wins Nobel Prize in Economics, becoming only the second (and youngest) woman to win the award

”I was not really meant to be a economist. I wanted to be a change-maker. I had no trust in economists, like most people. And yet 28 years later, I am here. I am an economist and to some extent something of a change-maker.”

Esther Duflo, 46, won the Nobel Prize in Economics, alongside her husband Abhijit Banerjee and Michael Kremer. Duflo and her colleagues worked on an approach to alleviate global poverty and explored the causes of poverty, and how those living in poverty respond to education, healthcare, agriculture and other programmes.

Part of efforts to end stigma and break the persisting silence around menstruation, the new period emoji — a drop of blood — became available this year. The emoji released as part of an Apple update, came after a Plan International UK campaign pushed for the icon. Emojis are one of the fastest growing global languages, and the period emoji aims to help women and girls discuss their menstrual cycles.

6. First-ever image of a Black Hole is made possible scientist Katie Bouman

Meet Dr. Katie Bouman, the scientist who made the first-ever image of a black hole possible pic.twitter.com/mWCAbANBko

The world got its first image of a black hole in April, thanks to Katie Bouman, a 29 year-old PhD candidate in the US. Bouman and her team created the algorithm that led to the image of a supermassive black hole in the Messier 87 galaxy. The image will help revolutionize the understanding of black holes going forward

7. Record-breaking year for women in sport

Women athletes had a record-breaking year in 2019 too, setting up whole new batch of role-models for girls around the world and proving that women can be just as (or even more) successful than any man in sport.

Here's the moment when our Goodwill Ambassador Marta made history at the #BRAxITA game. 🙌🔥🇧🇷⚽️🐐

Huge congratulations from her @UN family as she becomes the first player, women or men, to reach 17 World Cup goals. 👏🎉 #FIFAWWC #DareToShine pic.twitter.com/5bCb8OGEom

UN Women Goodwill Ambassador and Brazilian soccer superstar Marta scored her 17th World Cup goal, making her the top-scorer in tournament history for both men and women. In celebration of her record-breaking goal, Marta pointed to her cleat, where an equal sign in pink and blue signified her commitment to gender equality in sport and beyond.

Congratulations to @Simone_Biles who just won her 25th world medal in #Stuttgart2019🥇and made history as the most decorated gymnast (women or men) in the world! 🤸‍♀️👏 #WomenInSport pic.twitter.com/DOJmsv4gvW

USA Gymnast Simone Biles, 22, became the most decorated gymnast in the world after winning her 25th world medal. At the World Championships in Germany, Biles took home 5 golds, tying and then passing the previous record-holder.

Shelly-Ann Fraser-Pryce, 32, cemented her place as one of the greatest women sprinters of all time by winning her fourth world championship title in the 100 metres, and eighth world title overall.

Only a year after completing treatment for breast cancer, Sarah Thomas became the first woman to swim the English Channel non-stop four times. The 37-year-old completed the 130-mile swim in just over 54 hours, dedicating her swim to her fellow cancer survivors.

8. Landmark ruling in Spain after a gang-rape case

A young woman from Spain was finally awarded justice after being raped in 2016 by a group of men who referred to themselves as la manada (the wolf pack). A lower court verdict had found the five men guilty of the lesser charge of sexual abuse after the trial painted the survivor as a willing participant, pointing to photos from her social media accounts that showed her enjoying herself in the months after the attack. The 2019 Spanish Supreme Court ruling found the men guilty of rape and increased their prison sentences, showing a shift away from the culture of victim-blaming.

2019 marked some historic firsts for women in aviation around the world. In India, Sub Lieutenant Shivangi, 24, became the first woman pilot for the Indian Navy, fulfilling her life-long dream of becoming a pilot. Two more women pilots also got their Naval wings in December 2019.

In commercial airlines, Captain Wendy Rexon and her daughter first-officer Kelly Rexon became the first mother-daughter pilot duo. The two shared the cockpit for a flight from New York.

In April, a photo of Alaa Salah, dressed in white and standing atop a car leading protest chants, went viral. The iconic photo was taken during the widespread protests just days before the President of Sudan was arrested. Women and youth were the driving force of the movement in Sudan, representing more than 70 per cent of the protestors. In October 2019, Salah addressed the UN Security Council, calling on the international community to ensure women’s meaningful participation in the transition process going forward.

In Egypt, Tanzania and Indonesia bans on child marriage are now in effect, working to protect girls, their futures and education.

At the first African summit on child marriage, the deputy grand imam of al-Azhar created and issued a Fatwa on child marriage, with the guidance of young activists like UN Women’s Regional Goodwill Ambassador for Africa, Jaha Dukureh.

Congratulations to Tanzania’s Supreme Court of Appeal who upheld a ruling banning the marriage of young girls & directing the gov’t to raise the legal age of marriage to 18 years within a year.

I offer @UN_Women’s full support in the amendment of the law. pic.twitter.com/uEjt29Z12g

In Tanzania, the Supreme Court heard challenges to the 2016 ban on child marriage, but upheld the ruling, banning the marriage of girls under 15 and the directive to raise the age of marriage to 18 within a year.

12. Finland forms government of five parties all led by women, with youngest Prime Minister in the world

Finland’s 🇫🇮 @MarinSanna is set to become the world’s youngest sitting prime minister, as she heads a coalition government whose four other parties are all led by women. Via @guardian https://t.co/1Jgjh0uqpc

Botswana, Brazil and Ecuador all undertook legal reforms to protect the human rights of members of the LGBTQ community in 2019.

After widespread campaigns and advocacy, Botswana decriminalized homosexuality. Judges called the criminalization of same-sex relationships a violation of human rights and dignity.

In Brazil, homophobia and transphobia have been criminalized. In June, the Supreme Court voted that all acts of discrimination and hate against LGBT persons are a crime, with up to a five-year jail sentence.

Ecuador’s highest court legalized same-sex marriage in June, ruling it was discriminatory and unconstitutional to prevent marriage of same-sex couples. Ecuador is one of only a handful of countries in the Latin America region to legalize same-sex marriage.

My sincere thanks to European leaders for appointing me as President of the @ecb from 1 November 2019. It is an honour to succeed Mario Draghi. I am looking forward to working with the ECB’s talented staff to keep euro area prices stable and banks safe. pic.twitter.com/IkkKrKBBHn