Joining forces with Zonta International to end violence against women

As part of a new series highlighting UN Women partnerships, a look at efforts to confront gender-based violence with the Zonta International Foundation.

In the neighbourhoods of Villanueva and Nueva Suyapa, in the Honduran capital of Tegucigalpa, 78 per cent of women have experienced some form of violence in public places, including sexual and physical assault [1].

“If we want to see progress, we – all women – should get involved in our communities’ activities,” said  Maria de la Cruz Bustillo, a women’s rights activist and community leader from Villanueva, which this year joined the “Safe and Sustainable Cities for All” joint programme for women in Honduras, a UN Women initiative supported by the Zonta International Foundation. 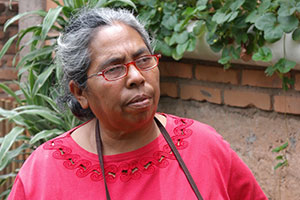 Initially piloted in November 2010 in Guatemala and El Salvador, the Safe Cities projects resulted in the establishment of a Specialized Institutional Unit to develop the skills of members of the National Civil Police to assist women in situations of violence in the city of Puerto de la Libertad, El Salvador. In Guatemala City, the country’s capital, and in the coastal town of Livingston, a Women’s Security Map was created and a directory of institutions and organizations that work on the issue of violence against women was compiled and distributed by Mobile Prosecution Units.

To build on such initiatives, the joint programme was implemented in Tegucigalpa, the capital of Honduras, in the neighbourhoods of Villanueva and Nueva Suyapa, to strengthen the rights, citizenship and participation of women to enable them to live a life free from violence. This programme is part of the UN Women Safe Cities Global Initiative and is implemented in partnership with UNICEF.

The project leveraged the efforts of local women like Maria to participate in activities that improve the lives of women in their community, such as the provision of critical services to women survivors of violence (including legal and psychological support) and initiatives to promote their economic empowerment.

With the technical support of Safe Cities, Maria and other women from organized grass-roots groups in seven neighbourhoods in Tegucigalpa came up with the “Security Agenda for Women in the Central District”—a document that maps the extent of violence women suffer and offers proposals to the municipal and national authorities in order to address the problem. Some of the main demands are to train judicial officers to provide quality assistance to women survivors of violence, to implement substantive changes in laws regarding the penalisation of sexual violence and the enhanced participation of women in the revision of the current police reform, among others. The Security Agenda has become a powerful advocacy instrument, which resulted in the signing of a “Commitment for a Safer City for women in the Central District” by all mayoral candidates for the Central District in October this year. 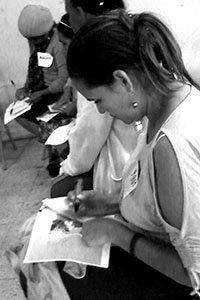 Training for Defenders of Women´s Human Rights is launched in the Nueva Suyapa neighborhood in November 2013. Photo: UN Women/Mónica Ropaín

Over the past five years Zonta has contributed more than USD 3 million towards UN Women efforts to end violence against women and girls around the world.

“Around the world, foundations and businesses are prioritizing efforts to advance gender equality and women’s rights for they recognize that this is the key to development. Zonta International’s support on this front is exemplary,” said Lakshmi Puri, Deputy Executive Director of UN Women. “Zonta’s partnership with UN Women comes as a result of their long and solid history in the global effort to end violence against women and girls. Their support of programmes being implemented by UN Women and the UN Trust Fund to End Violence against Women has made an enormous impact on the safety of women and girls in many countries.”

Initiatives currently being supported by Zonta in partnership with the United Nations Trust Fund include a joint project on “edutainment” for social change and a programme to empower rural women to combat violence in Samoa. The latter is engaging community leaders and traditional elders to advocate for a more comprehensive response to gender-based violence, building networks between grass-roots organizations, while training police, community leaders and survivors of violence alike to identify and address the causes of gender-based violence.

“We cannot and must not ignore the fact that violence against women and girls is still pervasive in all kinds of countries and societies, with one in three girls impacted during their lifetime,” said Zonta International President Lynn McKenzie. “It’s in our backyard. Zonta International has been committed to its prevention and eradication for many years.”

In November 2012, Zonta also launched Zonta Says NO, an international campaign to raise awareness of and increase actions to end violence against women and girls around the world, named after UN Women’s Say NO campaign. It features actions to prevent and end violence against women and girls in the communities of Zonta International’s more than 30,000 members in 65 countries worldwide.

[1] Study by the Centre for Treatment and Rehabilitation of Torture Victims and their Families.