“Women's organizations have been powerless in the face of everything our sisters have suffered. We are now in a process of national reform; I think that this should be done in a participative, inclusive manner that motivates us to become involved in the electoral process,” says Traoré Nana Sissako, lawyer and Chair of the Malian Women's Rights and Citizenship Group (GP/DCF), which seeks to promote the political participation of women in Mali. 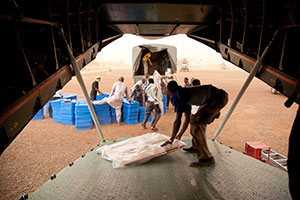 On 2 July 2013, in Gao, northern Mali as part of MINUSMA support for the country’s election process, UN planes transport electoral material to northern regional centers, where the material is handed over to the local authorities. Photo: UN Photo/Blagoje Grujic

Since March 2012, Mali has undergone one of the most serious security and political crises in its history, marked by the occupation of three of its main regions (Kidal, Timbuktu and Gao) and a coup d'état. Collaborative efforts at the national, sub-regional, regional and international levels have enabled the gradual recovery of all the regions under occupation and the gradual return of displaced populations and local government.

The presidential election of 28 July will enable Mali to start the reconciliation and reconstruction process. A total of 27 candidates, including one woman, are running for the presidency. The dominant themes of the campaigns are the consolidation of peace; the re-establishment of the State; economic revival and employment, particularly youth employment; the establishment of good governance; reform of the education sector; development of the micro-finance sector; and the implementation of a health policy for all. Equality and the empowerment of women are addressed through proposals for the creation of specific women's funds, attention to rural women, as well as in women’s strategic positioning in governance.

Malian women represent only 10 per cent of Parliament and are a mere 8 per cent of elected members to local government. During the last presidential elections in 2007, Mali’s first-ever woman candidate received less than 1 per cent of the votes cast.

For the upcoming elections, UN Women has supported the Malian Government in the creation of a "Gender and Election" strategy and action plan. Launched by the Prime Minster in May 2013, this strategy focuses on increased participation and representation of women in general elections from 2012-2015 and improving women’s representation in national political bodies.

As part of these efforts, with support of UN Women and its partners the Netherlands, UNDP and the European Union, four initiatives are being implemented by civil society women's organizations and the Ministry of Gender with a view to stronger women's participation in the electoral process. They aim to encourage women to go to the ballot and vote on the basis of a "gender" analysis of the candidates' programmes. It is estimated that nearly 2 million women and young people would be reached by these initiatives prior to elections either directly or through media coverage.

UN Women supported the creation of a women's oversight platform for fair and violence-free elections in Mali, inspired by similar women’s electoral “situation rooms” in Senegal and Sierra Leone. Active in Mali since mid-July 2013, the platform is a space where Malian women voters can exchange views and information. Every day, speakers come and debate side-by-side on a series of crucial issues, such as the importance of women's vote, the impact of electoral violence on their vote, the role of young people in elections, the role of the media in preserving peace, etc. The practical aspects of voting are also covered, such as the distribution of National Identification Number voter cards as well as the different stages of vote-counting. 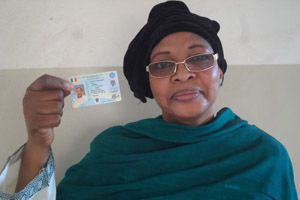 The platform has had 2,500 women and youth visitors, so far. To expand the platform’s reach, a website specifically dedicated to the platform's activities was launched on 23 July. Updated daily, it will include a discussion board, allowing Internet users to engage in debates.

Nana Sissako, the platform's president, says this initiative gives women the opportunity for the first time to voice their concerns and to understand the different candidates. “This is something that just wasn't done before. Women are going to be able to express their concerns to the candidates so that they can possibly review their programmes in light of the concerns expressed. Women are no longer going to vote for T-shirts or tea, but for programmes. They are going to vote for "meaningfulness and accountability.”

All the presidential candidates have been invited to the platform to present their programme, and outline their gender equity and women's empowerment mandates. Moussa Mara, of the "Yelama" party, was the first candidate to appear on the oversight platform and said, “If I am elected, 30 per cent of my Government will be women.”

Mrs. Djourté Fatimata Dembélé, a platform participant, says: “For me, voting is important because I want someone who cares about this country's future and its sustainable development. Sustainable development cannot be conceived without taking account of women's concerns, women’s active participation in political life and at every level. That is why I shall be voting!”

Alongside the oversight platform, the National Women's and Young People's Caravan for Peace will also enrich the electoral dialogues... During the two rounds of the presidential election, the Caravan will tour the entire country, calling for peaceful elections in the post-election period. Supported by public figures, including celebrities and artistes, as well as women from neighbouring countries such as Ivory Coast, Guinea and Senegal, the Caravan will facilitate community debates around the need for fair and peaceful elections and also aim to prevent post-electoral violence. 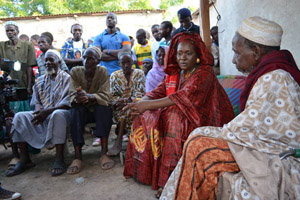 Photo courtesy of the Chato campaign

The pan-African network "Women in Law and Development in Africa" (WILDAF), a UN Women partner, is mobilizing support for the the sole woman candidate for the Malian presidential election, Haïdara Aïchata Cissé, known as "Chato". An elected Member of Parliament for Bourem in the Gao region, as well as a businesswoman and trade unionist, Mrs. Haïdara is featuring women strongly in her programme. She wants to facilitate rural communities’ access to finance and resources for economic activities, along with providing support to the most disadvantaged mothers for their children’s education, and improve social security.

"There is nothing inevitable about gender inequality," she said. "It's a matter of political priorities ... for without women it is impossible to steadfastly follow the road to prosperity. When all's said and done, it is women who reflect a country's development. My central theme is around the development and place of women. These two aspects are linked. It is the same challenge to be highlighted."

In the lead up to the elections, supported by UN Women, the "Woman: It is Your Primary Right to Vote" campaign was also launched in early July by the Minister for the Promotion of Women, Children and Families, Alwata Ichata Sahi. The campaign which started in two regions of Mali, involving more than 5,000 women and young people, is being rolled out across Mali.

According to Rachelle Mian, Country Director of UN Women in Mali, the engagement of women throughout this electoral process is encouraging: “I was pleasantly surprised by the platform’s success with women and by their enthusiasm for taking part in the debates. ... The debates have left me certain of one thing: women's vote will be thought through and will reflect their practical and strategic needs. In a word, a woman's vote will be "tactical," for her and for her family.”

Women elected to one-fifth of seats during Kenyan elections