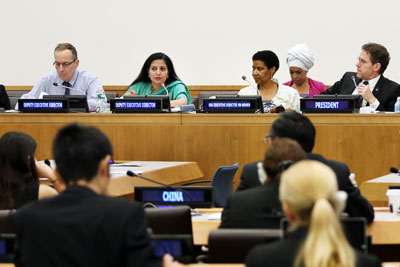 Deputy Executive Director Lakshmi Puri spoke about how crucial funding for a purpose is to UN Women during a special pledging event for the organization on 1 July, during the 2015 annual session of its Executive Board at UN Headquarters in New York. Photo: UN Women/Ryan Brown

More than 40 governments voiced their support for UN Women and dozens announced new funding commitments during a special pledging event for the organization on 1 July, during the 2015 annual session of its Executive Board at UN Headquarters in New York.

“We have been recognized as a force multiplier to get the UN system to do bigger and better for gender equality,” said UN Women Deputy Executive Director Lakshmi Puri. “Many have asked, what are your main challenges? Funding. … The key aspect of your pledges is for UN Women to be financed for purpose, not fit– you can’t be fit for purpose, without being funded for purpose.” 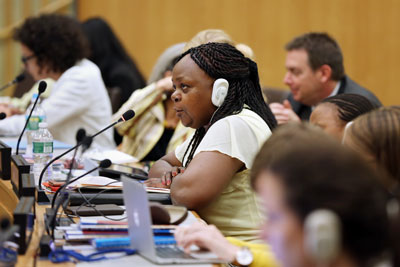 Kenya, a long-time supporter of UN Women's work and first-time donor was represented by Katherine Muoki, Director of Gender for Kenya’s Ministry of Devolution and Planning. Photo: UN Women/Ryan Brown.

In making its pledge, first-time donor Kenya cited its long-time support from UN Women, “investing in key sectors meant to close the gender gap, delivering key government services for women to access with ease, recognizing the invaluable success of Kenya’s one-stop centres,” said Katherine Muoki, Director of Gender for Kenya’s Ministry of Devolution and Planning. In fact, as a result of its extensive work at the national level with support from UN Women, Kenya was awarded the Women in Parliaments Global Forum prize for the African continent last March. 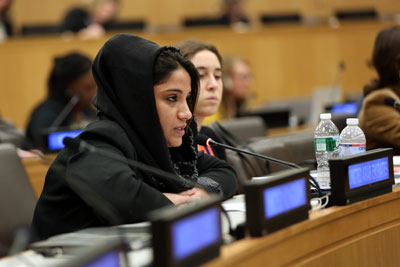 Among the beacons in their respective regions, the United Arab Emirates confirmed its donation to core resources of more than USD 7 million dollars for 2014-2015, saying it was “convinced of the essential role played by UN Women to empower the women around the world,” explained UAE Third Secretary, Ameirah Obaid Mohamed Obaid Alhefeiti. 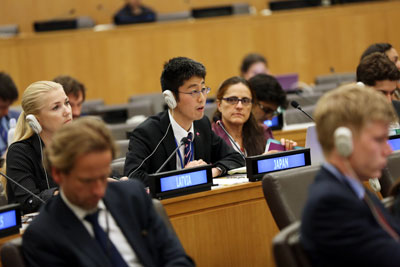 Playing a similar politically inspiring role in Asia, Japan, renewed its total contribution of USD 20 million and mentioned its newly opened liaison office to further strengthen “women’s empowerment in Asia, as a contributor to peace and security and humanitarian action,” said Koji Mizumoto, First Secretary of the Permanent Mission of Japan. 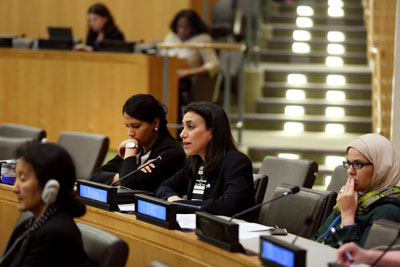 Smaller countries, such as Maldives, doubled their contributions, while others, including Panama and Mozambique, announced multi-year commitments.

Larger veteran donors such as Finland, Sweden and Norway reiterated their continuous support, applauding UN Women’s funding diversification strategy, especially with regards to developing relationships with the private sector. They encouraged Member States to pledge regular and multi-year commitments, for UN Women to fulfil high expectations. Echoing this sentiment, the United Kingdom, a veteran and “heartened” donor, encouraged more non-traditional funding to ensure that UN Women is “fit and financed for purpose.”

Innovative fundraising was suggested by Iceland, whose National Committee managed a successful network of individual – and an increasing – monthly giving programme, raising more than USD 260,000 dollars. “Just imagine the potential of monthly fundraisers in each country with [a] UN Women [National Committee present]. Each dollar goes a long way,” said Deputy Permanent Representative of Iceland, Nikulas Peter John Hannigan. Iceland has always been an important contributor to UN Women, among the highest per capita. 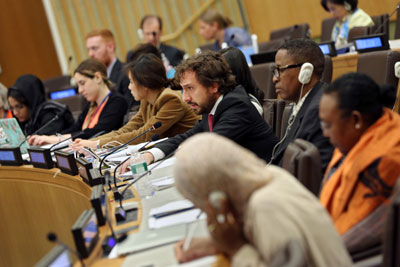 UN Women’s programmes and activities are sustained by financial contributions from governments, foundations, corporations, organizations and individuals. In 2014, 143 countries donated to UN Women, resulting in USD 330 million in total, including USD 7.9 million from the private sector. These three record numbers were key to refocusing UN Women’s fundraising with a philosophy of “widening, deepening and diversifying the resource base,” explained Director of Resource Mobilization, Antonie de Jong.

Ms. Puri concluded the pledging event expressing her “deepest gratitude to all for strong commitment: political and financial,” reaffirming their vital support for the organization’s mandate.